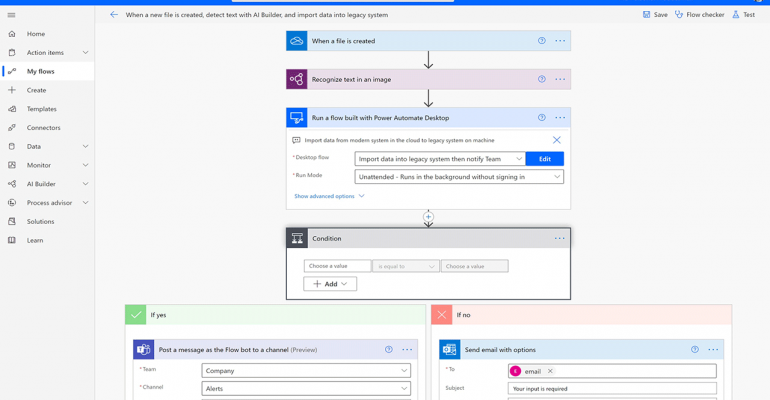 What is Power Automate? Codeless Automation for the Cloud

What is Power Automate? Like other no-code automation services, this tool allows routine workflows to be optimized and reduces manual intervention to accomplish many daily business-related tasks.

Automating workflow processes is a no-code method to ensure repetitive tasks get done in a consistent and timely manner. There are now several end-user tools that break automation out of the developer to-do list and let workers offload their tedious tasks. Services like Zapier, IFTTT, and Power Automate (previously known as Microsoft Flow) provide building blocks that require little to no coding to automate these repetitive processes. Ultimately, this saves time and improves the flow of information across teams so they can be more responsive to customer inquiries.

The third and final part of this no-code automation series will answer the question “What is Power Automate?”.

What is Power Automate? Know the Terminology

Power Automate implements no-code automation on multiple levels. For end users, there is the option to define automated routines via desktop action recording on the Power Automate Desktop app for Windows 10.

Here’s what you need to know about the Cloud Flows in Power Automate, which are similar to the functionalities of the other two services we have covered in this series.

Action: This is the task that's started when a trigger is invoked. Flows can have one or many actions, depending on what's needed to complete a particular flow. With actions, you can perform operations such as Create, Update, Delete, or Assign.

Automated Flow: When a predetermined trigger is fired, the automated flow starts. For example: when a row is created, deleted, or updated in a database, the flow will run.

Scheduled Flow: These run on a schedule defined by the maker. Scheduled flows can repeat on the following cadences: every second, minute, hour, day, week, and/or month. For example, users can schedule an automation such as daily data upload to SharePoint or a database.

Instant Flow: This feature allows users to trigger repetitive tasks from the mobile or desktop Power Automate app or from the Microsoft Teams app (if Flow is installed) by pressing a button that corresponds to a pre-defined flow. For example, by clicking a button on a mobile app, a user can send a reminder email to their team before a meeting.

Flow Checker: Flow Checker is a diagnostic tool that points to specific occurrences within the flow where improvements may be required to run the cloud flow.

Connectors: These allow users to connect popular services (such as Twitter, Outlook, Gmail, and more) to Power Automate. Note that the ability to use some of these connectors is linked to licensing plans; any connector labeled as a “Premium” connector is only available with some licensing programs.

Custom Connectors: These allow users to connect a web service to Power Automate. Users teach Power Automate about the characteristics of the web service, which include authentication, the triggers, actions that it supports, and the parameters and outputs for each of those actions.

More definitions provided by Microsoft can be found in the Power Automate Glossary.

What is Power Automate: Making Connections

As with the other no-code automation tools we have covered in this series, the connectors are used to bring together different cloud-based services to create a workflow in Microsoft Power Automate. These connectors have pre-built triggers in them to enable the user to automate routine functionality between the two cloud services.

User credentials and authentication are required to establish the initial connection between any connectors.

How to Create a Workflow: From Scratch and With Templates

These templates can be customized to an organization’s specific needs or desired workflow plus they can then be shared with other Power Automate users in the organization.

What is Power Automate pricing like? There are just two plan tiers to consider for this style of usage.

Free: Initial access to Power Automate Cloud Flows on the web and Power Automate Desktop falls under this free tier. However, as we researched this article and reached out to Microsoft, we could not obtain a defined list of what is and is not allowed within the free tier itself. We know that some level of automation is allowed in this tier and can be accessed with just a Microsoft account or through a Microsoft 365 subscription at no additional cost.

License by User: This paid tier provides access to run Cloud Flows (automated, scheduled, and instant) plus the ability to visualize and analyze processes with Power Automate’s Process Advisor. A user can run unlimited flows in this plan, but workflow actions are limited to just 500 instances per month. This plan costs $15 per user/per month.

Further licensing and usage details for the Power Automate service are available from Microsoft.