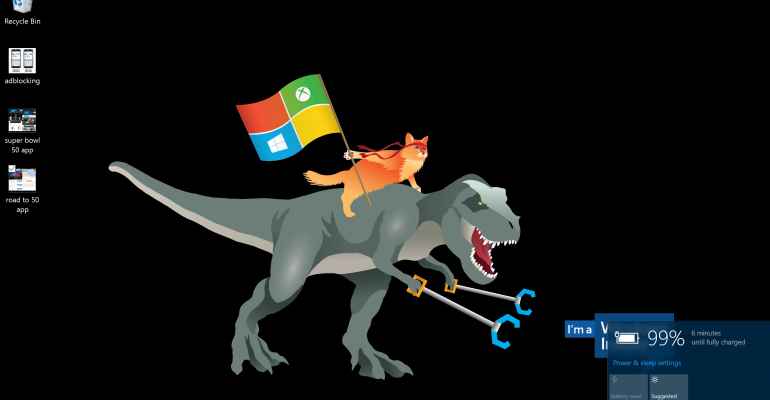 My love-hate relationship with the Surface Pro 4

The least helpful question in assessing a new piece of tech is “How do you like it?” Why? Because sometimes, users have contradictory feelings about their devices – for example, something that meets a need in your daily life can still be exasperating to use.

So how would I answer the unhelpful question, “Hey, Android Guy, how do you like your new Microsoft Surface Pro 4?”

On the one hand, I love it. My skepticism that the Surface could perform as the “tablet that can replace your laptop,” as Microsoft loves to proclaim, has mostly subsided.

I say mostly because there are still a few things that occasionally drive me nuts. Some of these things rest with the software, as Windows 10 is still wonky in a few places compared to the relatively smooth OS X. The experience also hasn’t been completely glitch-free with the hardware. I am on my third Surface after Microsoft swapped out the first two since they had various hardware issues.

Still, my mixed experience might be able to help other people assess their planned tech purchases – or see whether there’s something they can do to improve how they’re using their existing tech. Here’s how my Surface Pro 4 adventure has gone so far.

Sometimes you really need a pen to do your work

One of the reasons I was drawn to the Surface was my long-time affinity for the idea of pen input. It goes back to the Middle Ages of computing, before everyone had a smartphone and touch interfaces were a far-off dream. In the early 200s I had a Thinkpad Windows XP Tablet PC Edition.

I’ve floated away from my pen-based computing habit in the past few years. My need to go with a laptop as my primary computer given the fact I travel frequently and like to write on the go often drew me to a MacBook. I’m still relatively happy with that decision, especially in how well things like iMessage and Continuity work together (I use an iPhone for testing along with my Nexus 6P).

But when it comes to large projects, research, or editing there’s a lot of value in the pen input.  If you’re someone who reads a lot of text during the day and has to sometimes dissect boring analyst reports, the ability to highlight items and scribble notes is a serious game changer. The Surface’s pen and tablet combination really drives home how easy and elegant the user experience is when you have a well-deployed stylus and software combo. This has become critical to my workflow and I highly recommend it if you’re someone who requires doodling, highlighting or non-linear typing in your work or play.

The tablet takes on typing, does better than expected

The largest disincentive for those who are thinking whether or not to go with a Surface is the typing experience. Maybe it’s because I went in with pretty low expectations, but I find that the newest type cover works really well. The trackpad is fluid, and Windows 10 has good built-in controls for helping you to tweak how fast or slow the mouse response is.

However, coming from a MacBook Pro it’s not quite there. The built-in gestures are nice, but a three-finger swipe to the side limits you to the two most-recent applications. Instead, with OS X you can put all your apps in full-screen mode and swipe amongst all of them. It’s a small item that feels like it’s missing when moving from the MacBook to the Surface.

The Windows split-screen mode is nice, and is better implemented than Apple’s OS. However, even some of Microsoft’s apps are weird in how they scrunch all the commands together, making this mode far more effective on a larger, external monitor than on the Surface’s 12.3-inch screen.

Say this for Microsoft’s customer support - they’re happy to swap out your device if there are too many problems. My first unit had a weird bug that wouldn’t allow it to charge fully. There were also multiple fatal errors discovered when running a diagnostic test with the command prompt.

Device number two, unfortunately, was worse. It would often not come to life from standby. The backlit keyboard would come to life, but the screen was blank. A hard reset was required to resurrect it.

The third time was, well, you know how that saying goes. I still experience some of the charging issue, but by and large I haven’t experienced any other major problems. A recent firmware update may have also helped, and I’m eager to just get on and use the Surface without major hassles. All hardware makers have problems, but there have been a lot of issues with the current generation of the Surface line, which is surprising for what’s being marketed as a high-end device.

Windows 10 is an excellent upgrade over Windows 8.1. The tile nonsense has been relegated to a tablet mode, where it works well when you want to use the Surface as just, well, a tablet.

Where the new OS also shines with this device is how well it takes advantage of both touch and pen input. The gestures and responsiveness make you want to touch the screen, even when just the trackpad would do the job.

The verdict: I’ve decided to see other computers

Although I’ve come to really like and enjoy using the Surface Pro 4. sometimes I’m running back to the MacBook when the trackpad drives me batty or I miss being able to text fluidly right on the computer. It’s the little glitches in workflow that add up.

Yet there are other times that I go to touch the screen on my Macbook or reach for a pen that isn’t there. Marking up OneNote files or scribbling out an edit in a Word document is something that can’t be replicated in other ways.

The Surface gets a lot right: the pen experience, the interface, the customer service. But there are things it doesn’t quite nail. Before, when users were locked into a computing model that depended on one person, one computer, one operating system, it might have been expedient to work with or around the irritation. But these days, users are juggling multiple OSes across multiple devices. They unconsciously or consciously compare and contrast the experiences, and they expect a lot.

The Surface is great in a lot of ways, but it came into a world where a lot of other computing devices are great in other ways. The trick now is to see whether it can add to its great points in subsequent software releases.