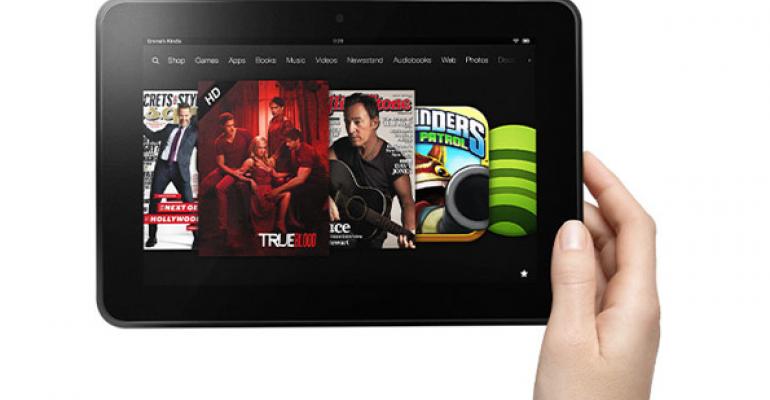 Amazon’s first full-sized tablet arrives and as you’d expect, it’s basically a large version of the well-regarded (and 7-inch) Kindle Fire HD. But this version sports an 8.9-inch widescreen display, and offers what appears to be a compelling alternative to the iPad or Google’s Nexus 10.

I will review the Kindle Fire HD 8.9 in the near future. For now, here are some early impressions.

First, the first-boot experience is amazing. You just enter your Wi-Fi password, select your time zone, and confirm that your pre-configured Amazon account is correct. And that’s it: It’s a miracle compared to the arduous and lengthy process you undergo whenever you set up a new iOS device. And Microsoft could learn a thing or two from the nice post-setup instructional app that teaches you how to use the device: In just a handful of swipes, you’re good to go.

Where the smaller Kindle Fire HD has kind of a weird squat look to it, the Fire HD 8.9 has a decidedly different aspect ratio to the body, creating a leaner and taller looking device. Compared to the iPad, it’s about the same height but considerably thinner, from side to side. I really like the look and feel of this machine.

The larger screen of course lends itself better to certain uses. Kindle-based magazines are much more reasonable on the big display, though they curiously leave an empty black area in the normal magazine layout view. The newspaper layout is also quite nice.

Movies and TV shows look amazing in HD, which isn’t surprising given the 1920 x 1200 resolution of this device. And the stereo speaks are surprisingly loud and clear.

More soon, of course. In the meantime, here are some photos of the device, including a few that compare it to the 7-inch Kindle Fire HD and the iPad.