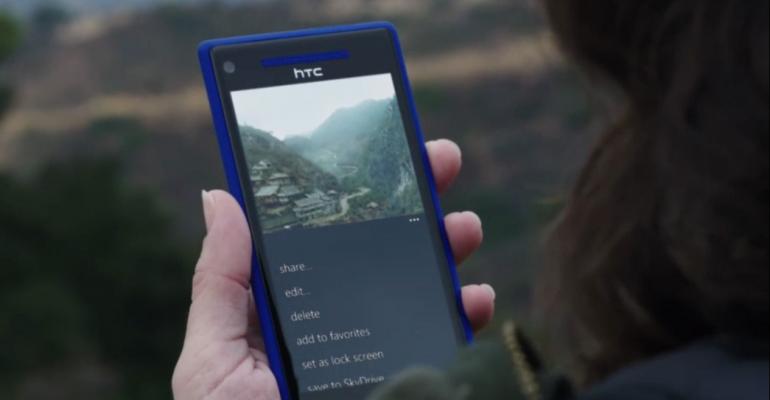 The most common usage for NFC until secure payments go mainstream

Note: Not all Windows Phone 8 handsets will include an NFC sensor. High-end devices like the HTC Windows Phone 8X and Nokia Lumia 920 do support this technology, however.

Windows Phone 8’s NFC sharing functionality, called Tap + Send, allows you to initiate a share transaction with another NFC device (such as another Windows Phone 8 handset). As per Windows Phone 8 Tip: Connect Bluetooth Devices via NFC, where NFC was used as a broker of sorts for establishing a Bluetooth device pairing, you don’t actually use NFC to share things directly. Instead, NFC is used to establish the connection between two devices and then the sharing occurs via another means.

Apps. If you find an app you like, you can share it with other Windows Phone 8 users. They’ll be directed to the app’s page in the Windows Phone Store.

Contacts. You can add or share contacts by tapping your phone against another NFC-enabled device.

Photos and videos. You can start sharing a photo or video with another Windows Phone 8 device (or with a Windows 8 PC or device) via Tap + Send and then complete the transfer with Bluetooth or Wi-Fi.

Web pages. If you see an NFC-enabled poster, flyer, or other display, you can tap it with your phone and then visit the web site it’s promoting. Likewise, you can share a web page with others by sharing from IE and then tapping phone.

Sharing via NFC works consistently across the many experiences in Windows Phone 8. Find an item you wish to share—say, a photo—and then find Share in the app bar menu for that experience. You’ll see Tap+Send in the Share screen if your phone is NFC enabled.

When you select this, the Tap+Send screen appears, giving you the chance to make initiate the share via NFC by tapping the phone to another NFC-compatible device.

Depending on what you’re transferring, you could see a progress screen while the transfer occurs over MMS, Bluetooth, or Wi-Fi.

If others are sharing with you, a variety of notification pop-up’s can appear.

NFC supports other uses as well. In tandem with a secure element in compatible SIM cards, NFC can be used to make secure payments from stored credit cards in the Windows Phone 8 Wallet hub via NFC-enabled sales terminals in stores, cabs, and other locations. At the time of this writing, only the French wireless carrier Orange supports this usage on Windows Phone 8, but other carriers, including those in the US, will come online throughout 2013.