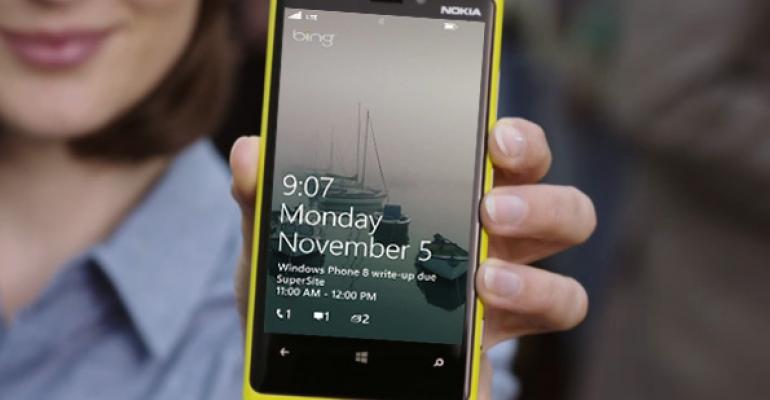 As you probably know, the Windows Phone lock screen offers some nice at-a-glance features, with wireless signal indicators, a photo wallpaper—now just called a background—the time and date, the next calendar appointment, and a series of notification icons tied to Mail and other apps. In Windows Phone 8, the lock screen appears to look and work largely identically to its predecessor. But there have been some big changes under the hood that make this screen even more effective.

To view and modify lock screen settings, you need to visit Settings, Lock screen. (In Windows Phone 7.x this was called Lock + wallpaper.)

Windows Phone 8 offers a new Background option in Lock screen settings, where Windows Phone 7.x had a Change wallpaper option that only allowed you to pick pictures for the background. Now, you can choose a picture, as before—using a Photo option that maps to the old Change wallpaper button—but also from a list of installed live apps that integrate with the lock screen.

What you see in this list will depend on which apps you’ve installed. But some of the nicer choices include Bing and Facebook. The Bing choice displays the Bing Picture of the Day, and that’s what I’ve configured on my own phone. Facebook, however, has more options, so when you choose this app, you get a new Open app button in Settings for configuring it more.

When you tap this button, Facebook gives you three choices for the lock screen: You can randomly display photos from all of your Facebook-based albums, or from photos of you. Or, you can pick a custom selection of photos.

Other live apps that integrate with the lock screen include CNN and Groupon, the latter of which can apparently show you deals that are both pertinent to you and nearby, thanks to the location services built into Windows Phone. Pretty cool.

While this is not new to Windows Phone 8, you can also optionally configure the lock screen to display artist information when playing music. It’s a nice graphical touch and, combined with the playback controls that can appear over the lock screen, a pretty full-featured experience for an app running in the background.

If you’re familiar with how lock screen notifications work in Windows 8, you will immediately recognize what Microsoft has done now in Windows Phone 8: As with its desktop-based system, Microsoft now provides room on the Windows Phone 8 lock screen for one detailed app status—typically for Calendar—and up to five quick status notifications, each of which can be assigned to an app of you choice.

(Windows Phone 7.x actually supported both of these, but they weren’t configurable in any way.)

The detailed app status provides detailed textual information, so in the case of the default choice, Calendar, you can see the appointment name, place, and time. Quick status notifications are simple icons with related numbers: So a Mail account will list the number of unread emails, while the Phone icon will display the number of missed calls.

For detailed status, you can choose between Calendar, Email, Messaging, and Phone by default. But third party apps can extend this, so you will have other choices based on which apps you’ve installed or accounts you’ve configured. For example, you can configure Facebook here.

The quick status notifications are supported by Mail (including individual accounts), Facebook, Games, Messaging, and Phone.

As with Windows Phone 7.x, Windows Phone 8 supports screen time out and password options. I strongly recommend that you configure a password. This device contains vital private information, after all.

Note: Responding to user complaints, Microsoft has made it much less easy to accidently wipe your phone when your company has enforced certain security policies through Exchange ActiveSync. In Windows Phone 7, it was possible for your company to remotely configure your phone to get wiped out if the PIN was entered incorrectly a certain number of times. But since many people’s children will play with the phones and trigger a remote wipe, Microsoft changed this behavior in Windows Phone 8. Now, before the final PIN entry attempt before a wipe, you’ll need to enter a simple alphanumeric phrase in order to continue.