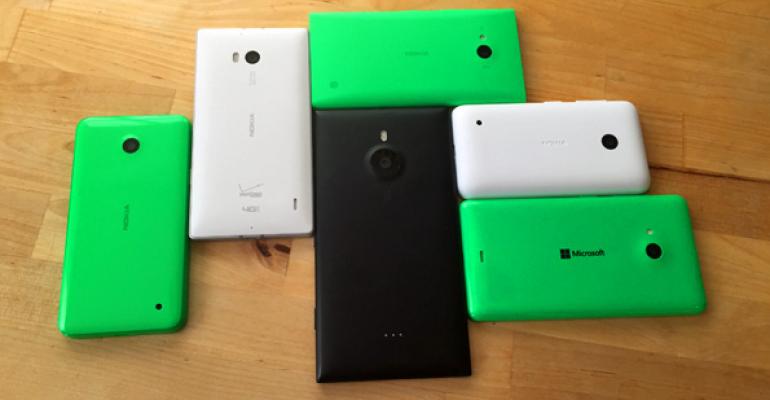 A while back I wrote an article comparing the pricing of the various models in Microsoft's—OK, Nokia's—Lumia lineup. A few things have changed since then, not the least of which is the introduction of the first-ever Microsoft-branded Lumia. So let's take a second look at this lineup as we head into the closing days of 2014 and see how they compare.

Check out Understanding Nokia's 2014 Lumia Lineup: Pricing for the first article in this neglected series. At that time, we didn't know what the pricing would be for the Lumia 735 and 830, and Microsoft hadn't yet announced the Lumia 535. Now we have a bit more information:

Lumia 735 pricing. The Lumia 735 won't officially arrive on these shores until 2015, when it will be sold by Verizon. But you can pick one up now from Expansys for about $300 if you don't mind HSPA speeds. Note that this price is pretty much what I estimated it would be.

Lumia 830 pricing. As I noted in AT&T Finally Announces Lumia 830 Pricing, an AT&T-based Lumia 830 costs $100 with a two-year contract or $450 if you buy it outright. That latter price is both $100 more than my original guesstimate and is, more important, far too much money for a device of this caliber.

Lumia 535. Microsoft announced the Lumia 535 in early November, further confusing the Lumia lineup with yet another low-end phone. I've come around on why this device makes some sense and now that I have a review unit, my first impressions are generally positive though I do have some doubts about the flimsy build quality—a first for any Lumia—and the terrible camera.

With all that in mind, let's examine Microsoft's Lumia lineup and see how the core specifications compare as one moves from device to device. I'll focus here on the same devices described in Understanding Nokia's 2014 Lumia Lineup: Pricing, but will add the Lumia 535 into the mix as well. And what you'll see, generally—but with a few exceptions—is a fairly linear progression as you step up the line from the low-end to the high-end.

Here, you see a clear delineation between the low-end (Snapdragon 200), mid-level (Snapdragon 400) and the high-end (Snapdragon 800). There are no real surprises here at all, though I'd add that processor speed is a lot less relevant for Windows Phone OS, which runs very well on low-end hardware, than it is on Android.

If you're going to actually use a Windows Phone as your day-to-day smart phone—e.g. it's not just a media player or secondary device of some kind—then RAM matters, and my advice is to stick with those devices that offer at least 1 GB of RAM. That will ensure that you have access to the widest possible library of apps and games, now and for the foreseeable future.

This category ties in somewhat with the next one, microSD expansion. But the short version goes like this: 4 GB of built-in storage is unacceptable, and 8 GB is barely acceptable, but in either case you will need microSD expansion. So factor that cost into any buying decision. I recommend going 32 GB or higher on the microSD.

Only the Lumia Icon/930 does not offer microSD expansion, and I'm mostly OK with that. The Lumia 1520 is a weird case: With 16 GB of internal storage, you will want/need microSD expansion on this device.

With the exception of the 5-inch Lumia 535, the screen sizes on the Lumia lineup actually increase from device-to-device as you move up the line. (OK, not really. I'm leaving the big-screen 1320 out of this comparison, and that would likewise muck up the progression.) In general, I find that 5-inches is the sweet spot for screen, though your own needs may vary. And I do use and like the 4.7-inch Lumia 735 quite a bit. One final note: the Lumia 530 screen isn't just small, it's terrible. This is reason enough to skip this device.

If you care about camera quality, you know that Microsoft/Nokia makes the best smart phone cameras, period, though that accolade really only applies to the Lumia Icon/930 and 1520 (and of course the 1020, which is too old to make this list). Of the remaining devices, only the Lumia 730/735 sticks out: I'm really surprised by how good the main camera is on that handset.

I don't personally care all that much about a front-facing camera, but you might, and the Lumia 530 and 630/635 both do not include one. The front-facing camera on the Lumia 535 and 730/735 is identical and is what Microsoft calls its "selfie camera" because of its wide viewing angle. I didn't find it to be particularly interesting in my own tests, however.

Sensors don't get enough press, but they should as they often dictate the type of experience you'll have with a phone. Every Lumia includes an accelerometer, which basically deals with rotation in 3D space; it's what makes the device switch views when you rotate it. All Lumias save the 530 and 630/635 include an ambient light sensor, which can be used to automatically change the screen brightness.

The Lumia 535, 730/735 and the high-end Lumias all include a proximity sensor, which is most often used to turn off the screen while you're speaking on the phone. And the high-end devices all include both a gyroscope and magnetometer, which are used in games and apps that require precise positioning and orientation, or compass capabilities.

SensorCore is unique to the Lumia platform and provides a way to measure motion and location without impacting battery life in a major way; this is what enables health and fitness tracker apps to work.

Looking at all this information—and obviously there are other specifications you may be concerned with, like weight—you can eliminate certain Lumia models from your decision making. For example, if a good camera really matters to you, you'll want one of the high-end devices or possibly a Lumia 730/735. If a front-facing camera matters, you can skip the Lumia 530 and 630/635 as neither includes one. And I think the Lumia 530 specs eliminate it from contention, period.

For me, the Lumia 730/735 is the minimum I'd accept as a daily-use phone, and I've indeed been using the Lumia 735 in that capacity for well over a month. But a Lumia Icon/930 or 1520 would be quite nice too, and include even better cameras and, on a down note, bigger form factors and more weight.