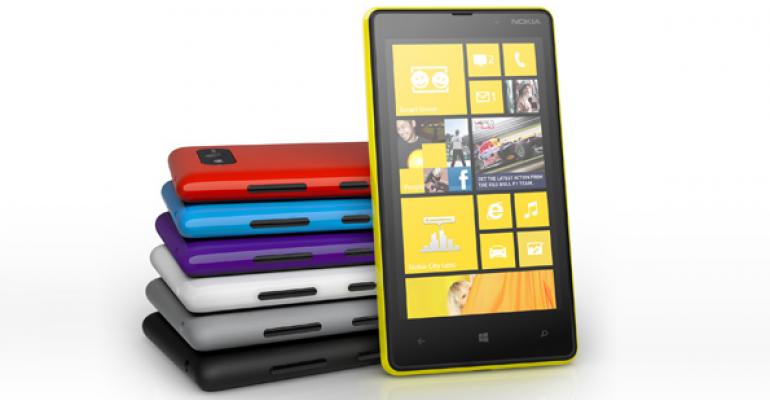 Talk about muddying the waters.

On paper, it should be no comparison: Nokia’s flagship device, the Lumia 920, sports an 4.5-inch HD+ 1280 x 768 display, a 1.5 GHz dual core processor, 1 GB of RAM, 32 GB of internal storage, an astonishingly good 8.7 megapixel PureView camera, built-in wireless charging, LTE networking, and a solid unibody design. Why would a Windows Phone fan, or a Nokia fan, buy anything else?

The mid-market Lumia 820 has a supposedly lowly, non-HD, 800 x 480 display that’s 4.3 inches big. It comes with just 8 GB of internal storage. It has a great, but not PureView, 8 megapixel camera. And its design is pedestrian, with no built-in wireless charging and no unibody. Sounds bland, right?

Sir, please put away your credit card. Because this decision just got interesting.

First, the 820 sports the exact same 1.5 GHz dual core processor as the 920, the exact same 1 GB of RAM, and the same support for LTE networking. But it also exceeds the 920 in some fairly critical ways. These include:

Storage. While the 820 comes with only 8 GB of storage, it supports microSD expansion, a feature the 920 lacks. And this means that you can add a whopping 64 GB of additional storage to the device, for a total of 72 GB of storage, over twice what Nokia offers in the 920.

Color options. While not having a unibody design may seem like a negative, it’s not: A 920 is stuck with whatever color you chose the day your purchased the device, but the 820 is served by a removabl back (see above), and you can choose a back in black, red, yellow, white, or cyan, providing on-the-fly personalization that’s impossible with the flagship phone.

Removable battery. While the 920’s battery is sealed inside that unibody design, the 820’s removable back means you can remove and replace the battery yourself, anytime you want. So buy an extra one and bring it along for those heavy-duty usage days. (Which may not be a bad idea: The 820 battery is rated at just 1650 mAh, well below the 2000 mAh unit in the 920.)

Size and weight. The 920 is wonderful but it’s also humongous, and heavy and thick phone that many people will not be comfortable with. The smaller, sleeker 820 will fit more comfortably in most people’s hands.

Price. While a $50 savings over two years doesn’t amount to much, it’s a simple fact that acquiring a Lumia 820 is half as expensive ($49.99) as is acquiring a Lumia 920 ($99.99), assuming you’re starting a new account or are eligible for an upgrade. You shouldn’t decide based on this one thing, but if you do go with the 820, it’s like the icing on the cake.

Additionally, some of the other supposed negatives for the 820 aren’t. That lowly 800 x 480 screen looks great, thank you very much, and as I noted when that resolution was the only option on Windows Phone, anyone who tells you that it is sub-par hasn’t ever used one. Even after using an HD Windows Phone 8 device for weeks, the 820’s lower resolution screen looks just great to me.

And that camera? No, it’s not the market-leading camera with which Nokia graces the 920. But man, is it a good camera. In fact, it’s roughly on par with the camera in the HTC Windows Phone 8X, and photos taken with it don’t suffer from the yellowish tinting effect that somewhat mars the HTC photo experience. Long story short, the camera in the 820 is superior to the camera found in any previous generation smart phone (including the iPhone 4S) and is on par with the best of the bunch this time around. Only the 920’s camera comes out ahead.

When you couple all of this with Nokia’s incredible and unique selection of apps—Drive being the key one, but also Nokia Music, City Lens, and many others, plus a growing number of third party apps that are exclusive to Nokia devices, the 820 just keeps getting better.

See the problem yet?

If the camera is all you care about, the Nokia Lumia 920 is a no brainer. But if the other aspects of the 820 resonate with you—the case options, the expandable storage, the more reasonable size and weight—then suddenly the Lumia 820 is—gasp—the better choice.

Compared to the HTC Windows Phone 8X, the 820 gives up a lot in the way of design—the HTC is the best looking phone on the market right now, bar none—and loses in the size and weight department. But it wins big with the customization capabilities and the camera. It’s kind of a toss-up, and it makes picking an obvious winner—all three devices are for sale at AT&T Wireless right now—a tough call.

I think it breaks down like this. Yes, the 920 has the best camera, and if that’s all you care about, and you can live with the mammoth size of that device and its other limitations, your quest is over. If you care about design, size, and weight, the HTC 8X is the clear choice: It’s the prettiest phone, the best fit in a pocket, and is my own choice overall. But if the unique features of the 820 win you over, as I suspect they will for many people, this mid-level Nokia suddenly emerges, unexpectedly, as the best alternative. And my guess is that this device, despite its low-res screen, is the right compromise for the widest possible audience.

The Nokia Lumia 820 should never have been a contender. And yet I find myself liking this phone quite a bit. If you’re in the market for a Windows Phone 8 handset, do not make a decision until you’ve thoroughly evaluated the Lumia 820. It may just surprise you.