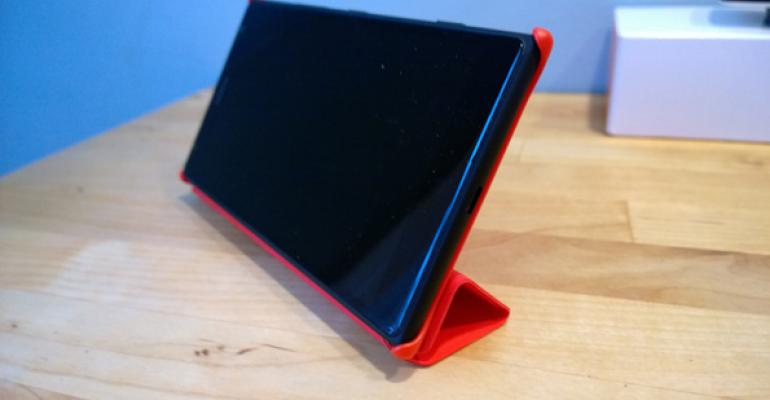 This is not the Smart Cover you think it is

With a screen as big as a small tablet, you're going to want to protect your Lumia 1520. And Nokia provides a handy Protective Cover for this purpose, an accessory that looks and appears to work much like the Smart Cover that Apple provides for its iPads. But the Protective Cover is much less sophisticated than Smart Cover, and provides only basic protection.

I'm reviewing this one after just a few days of use because it's so straightforward. As I noted in my first impressions of the Lumia 1520 itself, that device will require more thoroughness and time.

The Protective Cover is straightforward: It clips onto the back of the Lumia 1520 and holds on via the device's corners, much like the Wireless Charging Covers that Nokia provides for handsets like the Lumia 925 and 1020. But the there's no wireless charging functionality offered by Protective Cover. As its name suggests, this accessory is all about protecting the device, both its screen and its back.

The back coverage is complete and strong, thanks to its solid plastic design, and the only holes are for the camera and its flash. No surprises there.

The nicest bit to the cover is the folding front piece: This protects the screen, and folds over like the cover of a (very floppy) book cover. If you've seen the covers that Samsung supplies for its Galaxy S4 and Note handsets, you get the basic idea. But if you're familiar with Apple's Smart Covers, you'll see a pretty obvious design rip-off: The Protective Cover looks almost exactly like a Smart Cover, and provides the same three asymmetrical sections, which indicate that you can fold the cover into a three-sided tent of sorts and use it as a stand.

Put simply, Protective Cover, while necessary, provides only basic protection: It does cover the screen, but that cover is easily pushed aside inadvertently, undercutting its central mission. And it does provide a folding stand, though that stand only works with the device standing up fairly straight. On the good news front, the Protective Cover doesn't add much in the way of thickness to your Lumia 1520, though I does of course add to the weight.

Do you need one anyway? Yes, I think so, and I'll be leaving my Protective Cover on the Lumia 1520 to protect that large screen. But I'll still need to be fairly compulsive about checking on it, since you can't really rely on that cover staying in place as you move around.