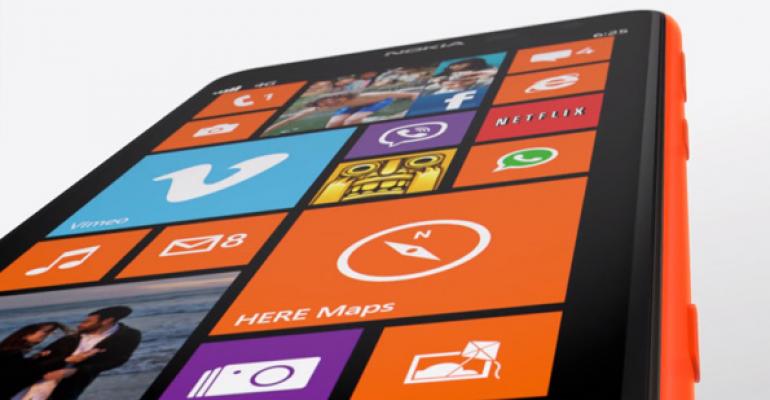 So when will Nokia release a high-end phone with a huge screen?

On Tuesday, Nokia introduced the Lumia 625, a low-end Windows Phone handset with a huge, 4.7-inch screen. Like the Lumia 520 and 620, the Lumia 625 sports removable color backs and looks to be attractive and well-made. But at that size, one would hope for HD resolution, and the Lumia 625 packs only an 800 x 480 panel.

The good news? It’s gotta be the cheapest phone with that screen size: 220 Euros, or about $290 US. The bad? That currency is a hint that the 625 won’t be offered in the US. It’s heading to China, India “and other countries outside the US” in the third quarter.

So this tells us that Nokia is indeed grabbing for gold in the low-end of the market, as I discussed yesterday in Windows Phone Price Point: How Low Can It Go?. And really, good for them. I’m looking forward to checking out big-screen Lumias in the US, both low- and high-end, in the future. For now, however, the 625 is still pretty interesting.

Spec-wise, it’s low-end. It features a 1.2 GHz Snapdragon processor, just 512 MB of RAM, and just 8 GB of internal storage (but with micro-SD up to 64 GB as well). It supports 4G, not just the HSPA/HSPA+ variety, but also LTE, which is pretty amazing. The main camera is 5 megapixels, but it does provide a front-facing camera too, unlike the 520.

And then there’s the screen. 4.7 inches is big. But 800 x 480 is relatively low resolution. I’ve noted in the past that those who have complained about this resolution on current Windows Phones just don’t get it, and that in general the screens look fine. As we get up in physical size, however, this is something to think about. I’ll need to see one of course.

It can be had with several very colorful snap-on backs, and you can replace yours with another color: orange, yellow, bright green, white, and black are offered, a much better selection than the usual Nokia colors.

And it of course comes with Nokia’s great selection of apps: The HERE apps (Maps, Drive, and Transport) plus Nokia Music (with ad-free, subscription-free music), Smart Camera, Cinemagraph and more.

Looking good. But why the delay between announcement and delivery?

You can learn more about the Lumia 625 on the Nokia product page. Plus check out the video: