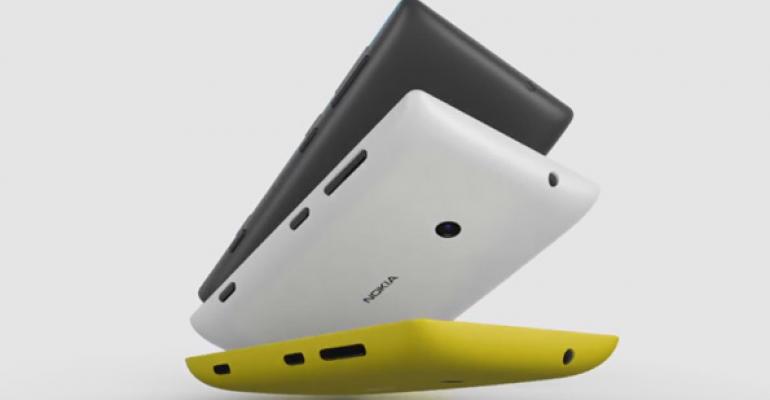 As expected, Nokia announced two new Windows Phone 8 handsets at Mobile World Congress this week, the Lumia 720 and Lumia 520. Based on the screen sizes and specifications, these devices target the mid-range and low-end of the market, respectively, offering an interesting mix of high-end features and low-end price tags. Here’s a peek at what’s new with the Lumia 520, Nokia’s new low-end smart phone handset.

Now Nokia’s most affordable Windows Phone handset, the Lumia 520 is a decidedly low-end device with a 4-inch 800 x 480 display, a 1 GHz dual-core Snapdragon processor, 512 MB of RAM, 8 GB of internal storage (and microSD expansion for up to 64 GB more), and a 5 megapixel camera. It will be available in five colors: Yellow, red, cyan, white and black, and you can replace the device shell with other colors to customize the look.

One somewhat unique feature to this device, however, is it support for Nokia’s “super sensitive touch technology,” previously available only on the Lumia 920, 820 and 720. This allows the device’s touch-screen to be used with “your nails, car keys or even [while] wearing gloves.”

Note, however, that there’s no front-facing camera.

The Lumia 520 will debut in March in Hong Kong and Vietnam, and then roll out more broadly in the second quarter to China, India, Europe, Latin America, the United States, and other markets around the world. (In the U.S., the Lumia 520 will be available via T-Mobile.) It will cost just $185 with (possibly without, based on the comments below) a two-year contract.

Find out more from Nokia: Have more fun with the Nokia Lumia 520