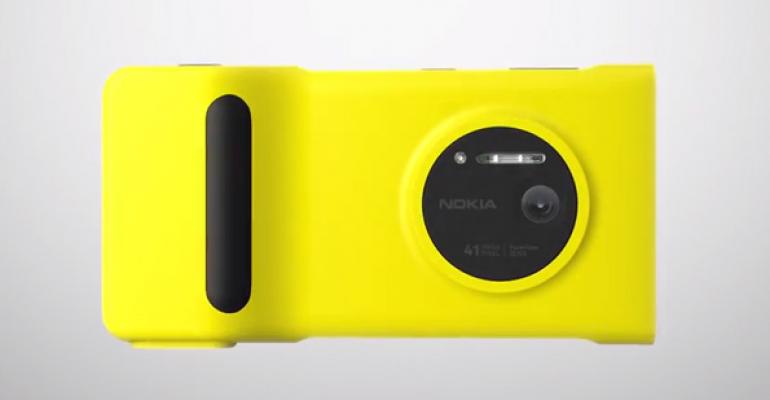 As usual, Nokia steps to the plate with worthwhile Lumia add-ons

Like hundreds of others who attended Nokia’s Lumia 1020 launch event yesterday in New York, I got to spend a bunch of time with the exciting new device there. But I was particularly interested in a handful of Lumia 1020 accessories that Nokia debuted at the event, the Lumia 1020 Camera Grip and Lumia 1020 Wireless Charging Cover. Here’s a quick peek.

This accessory got the most play at the event, and for good reason. It adds a considerable amount of heft and size to the 1020, but provides some key additional functionality:

One-handed shooting. With the grip, you can take shots with just one hand using two step shutter control, thanks to a conveniently located button on the top of the bulky (and grippy) part of the grip.

Color choices. Like the 1020, the grip is offered in black, white and yellow.

As with the Lumia 720 and Lumia 925, the Lumia 1020 dispenses with built-in wireless charging because the charging coils add a bit of thickness and weight to the device. But as with those devices, you can optionally add a Wireless Charging Cover, bringing this capability to the 1020 at the expense of just a bit of weight and thickness.

Since I use such a cover with my 720, I was happy to see that the Lumia 1020 Wireless Charging Cover is similarly light and thin and easy to clip on and off as needed. As an added benefit, the cover also serves to smooth out the camera bulge on the back of the device, a nice touch.

But as a heads-up, there is one unfortunate side effect of the way in which these accessories clip onto the 1020: You can’t use them both together.