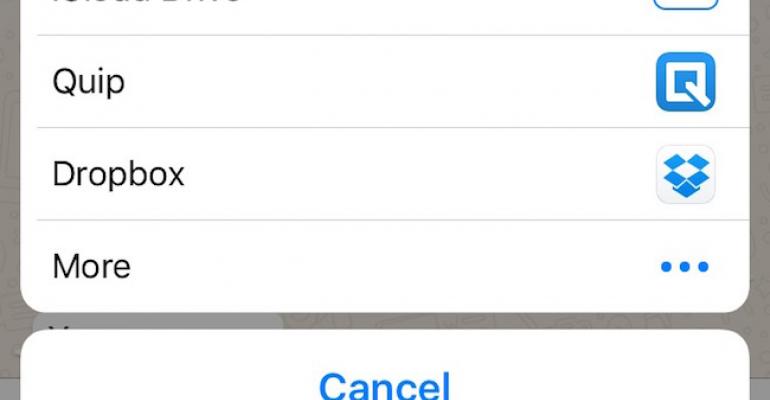 With new feature, WhatsApp wants to be in your business

Shadow IT just got a little more shadowy, as WhatsApp unrolled a new feature that allows the easy passing of PDFs among its one billion users.

The war for business messaging has been quietly heating up for the past few years, and WhatsApp is making it clear that it wants a piece of the pie.

The Facebook-owned messaging giant, which has a billion users worldwide, has added document sharing to its list of features.

Forbes noted the change, which hadn't officially been announced by WhatsApp:

For now the feature appears to be limited to PDF files but it does pull files from third-party cloud storage apps enabled on the phone, including iCloud Drive, Dropbox and Quip.

This is an important upgrade for small businesses who use WhatsApp to communicate with one another, or with customers – for example making it easier to share invoices and price lists or product information that’s stored on a cloud service like Dropbox.

The feature comes just a little over a month after WhatsApp announced a push into the commerce and marketing worlds:

Starting this year, we will test tools that allow you to use WhatsApp to communicate with businesses and organizations that you want to hear from. That could mean communicating with your bank about whether a recent transaction was fraudulent, or with an airline about a delayed flight. We all get these messages elsewhere today – through text messages and phone calls – so we want to test new tools to make this easier to do on WhatsApp, while still giving you an experience without third-party ads and spam.

It's also sure to open up a new avenue for shadow IT to propagate, as users take advantage of the service to quickly shoot back and forth copies of documents for review.

Facebook in Blockbuster Deal to Acquire WhatsApp for $16 Billion
Feb 19, 2014

Slack Aims to Grow Even Faster, and Your Users are in the Crosshairs
Nov 16, 2015