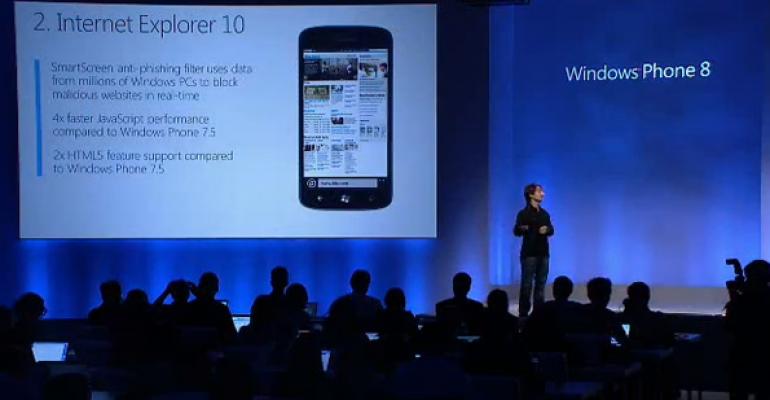 Microsoft's mobile browser is on-par with its desktop cousin

Looks like I’m not the only one writing about Windows Phone 8 these days—though, as a reminder, I have posted almost 30 Windows Phone 8 tips in the past month—as Microsoft has posted some interesting information about Internet Explorer 10 Mobile. I have a few things to add to this discussion.

According to Microsoft’s Amin Lakhani, Internet Explorer 10 Mobile is a “brand new browser” and yet “looks pretty familiar” to those who used IE on previous Windows Phone 7.x versions. This is a theme with Windows Phone 8: It looks and works almost exactly like its predecessors, but there have been major under-the-covers changes.

Because the IE 10 Mobile app bar is so simplified, you may miss some functionality from the previous versions. To the left of the address bar, by default, you’ll find a Refresh/Stop button. But you can configure this to be a different button in Settings: You can pick Favorites or Tabs instead. Nice!

IE 10 Mobile isn’t just better looking, with a more efficient design. Under the covers, of course, IE 10 Mobile is a huge upgrade. And unlike previous versions, it’s actually based on the same web browser core and rendering engine as its desktop-based cousin in Windows 8. So IE 10 Mobile really is a version of IE 10. It’s not IE 10 in name only.

This means that web sites will render better, since the core rendering engine is far more standards compliant than previous versions. But IE 10 Mobile also includes the SmartScreen Filter security feature. Many misunderstand why you’d want such a feature on a smart phone, and I’ve heard the argument that Windows Phone has such a smaller user base that no hacker would ever both attacking it.

That is not what SmartScreen is about: Instead, it helps prevent hackers from trapping you in a phishing scam, in which you believe you’re visiting a legitimate web site for a bank, retailer, or other place that may have your credit card data and other personal information, but are in fact visiting a malicious site that is stealing that information from you.

“SmartScreen uses the latest data available to help protect you from phishing threats while you browse, a level of built-in protection not found on competing smartphones,” Lakhani notes. “These real-time checks are important because the average phishing site is typically active for just a short amount of time.”

(IE 10 Mobile also supports IE 10’s Do Not Track functionality, which is good in theory. But given the reaction to this technology, I suspect its real-world impact will be less dramatic.)

The final thing I’d like to address is a perception issue that dates back to Windows Phone 7.x days, that the relatively low resolution (800 x 480) of those phones, and now new mid-level and low-end Windows Phone 8 handsets like the Nokia Lumia 820, is somehow a problem, especially in text-heavy apps like IE. This is most decidedly not the case. In fact, viewing the same text, zoomed in and not, on both the HD-class HTC Windows Phone 8X (1280 x 720 display) and the Nokia Lumia 820 (800 x 480) reaffirms my belief that the text rendering on Windows Phone is so excellent that this argument is moot.

A few screenshots will help illustrate this.

As you can see, the taller and more pixel-filled HTC 8X does indeed show a bit more “stuff,” vertically. But the text is as readable on both screens, and this is especially obvious when you zoom in.

Point being: Don’t be misled by people about the 800 x 480 Windows Phone handsets. These are fine devices, and IE 10 Mobile, like the rest of Windows Phone, takes advantage of ClearType sub-pixel rendering to minimize the differences.

Overall, IE 10 Mobile is good stuff. And while I never really found the Internet Explorer experience on Windows Phone to be lacking per se, this is clearly the best version yet.