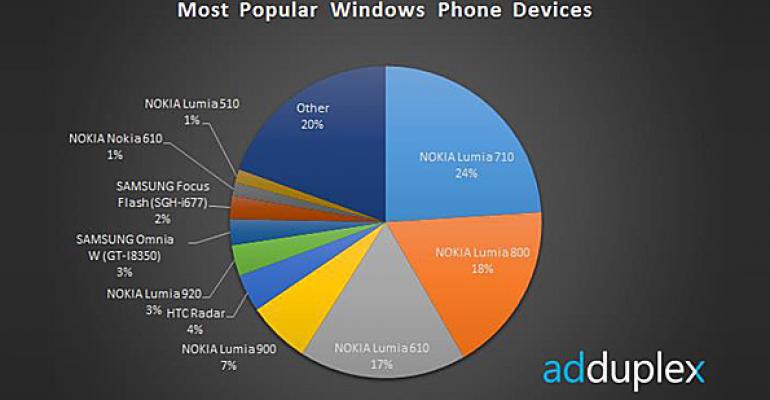 Mobile ad firm AdDuplex garnered plenty of attention when it revealed in November that Microsoft’s Surface with Windows RT was the most popular Windows 8 device in the two weeks after that OS launched. This week, the firm provides some fascinating stats about Windows Phone, some of which may surprise you.

AdDuplex has actually been publishing Windows Phone stats for some time. But its latest report is particularly interesting because it covers the launch of Windows Phone 8.

Windows Phone 8? AdDuplex says that the Nokia Lumia 920, with 3 percent of usage (and in sixth place overall) has come roaring out of the gates. And the HTC Windows Phone 8X? It’s in 20th place.

Countries: The biggest Windows Phone market is the US (14 percent), followed by China (13 percent), India (12 percent), Mexico, Russia, and Italy (6 percent each), and the UK (4 percent). AdDuplex notes that growth in Mexico, Brazil and Finland is notable.

Users per app. AdDuplex says that this stat can be compared to Microsoft’s claim that its partner have sold “four times” as many Windows Phone 8 handsets at launch as they did a year ago: According to AdDuplex, the average daily users per app are up about 3.5 times over last year (468 vs. 132).