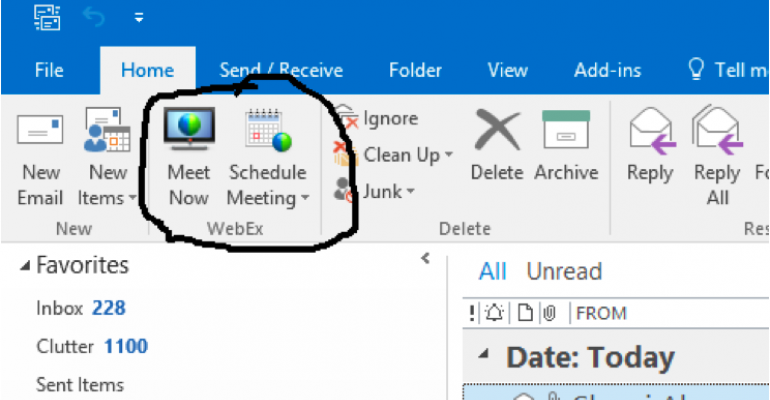 A nice example of an integration that I performed this morning was to add WebEx’s Productivity Tools plug-in to my Microsoft Outlook environment.  WebEx enables online demos, whereby the meeting host can share his or her screen with online meeting participants, along with audio either via the meeting client or phone dial-in to the conference, and online chat functionality, as well as other capabilities.

Now, instead of creating an appointment in Outlook, inviting attendees, and cutting-and-pasting info into the body of the meeting Invite from a separate launch of WebEx, I simply invoke “Schedule Meeting” (or “Meet Now”) from my Outlook Ribbon (at screen-top).  WebEx does the work of automatically generating the link for the online meeting and placing it in the Meeting’s body.  It generates the discreet dial-in number for the meeting, the access code, and includes all information on how to access the meeting (video and audio), as well as placing the meeting on everyone’s respective calendar (upon their Acceptance – they receive notification in their Inbox).  Times are automatically converted for various time zones.  WebEx can also yield a view to everyone’s free spaces on schedules, thus allowing the host person (and/or scheduler) to successfully choose a block of time that is free for everyone.

In addition to various apps’ integrations, a tremendous leap was made with web-based applications, and thus web-based integrated apps – this removed the constriction often imposed by various users’ different operating systems, versions, and compatibilities.  Now, the browser is the “app” – or more accurately, the integrated app/s.

Web-based apps also offer the advantage of being able to work anywhere at any time, on virtually any computer or mobile device, although in the case of the latter, screen-size can be a limiter.  Today it really pays to stay abreast of the various apps that offer plug-in capability to other apps, and which offer web-enablement.

Aside from app-to-app integration that is offered by various app makers, there is also the capability for organizations to craft their own integrations.  Be aware that if not done carefully, you may break more things than you fix!  Also, be careful not to remove yourself from standard upgrade paths.  In othe words, while attempting to maximize “front-side-of-the-screen” capability, don’t muck up “back-side-of-the-screen” stability and forward momentum.  Integrating apps to the highest degrees requires the involvement of Developers who know what they’re doing.  Be certain that your in-house development team (if you have one) is trained and spec’d; if employing a vendor, choose wisely.

But as to the sanctioned, proffered, integrations – survey for them and make the most of them.  There’s an awful lot of efficiency and even fun to be had.