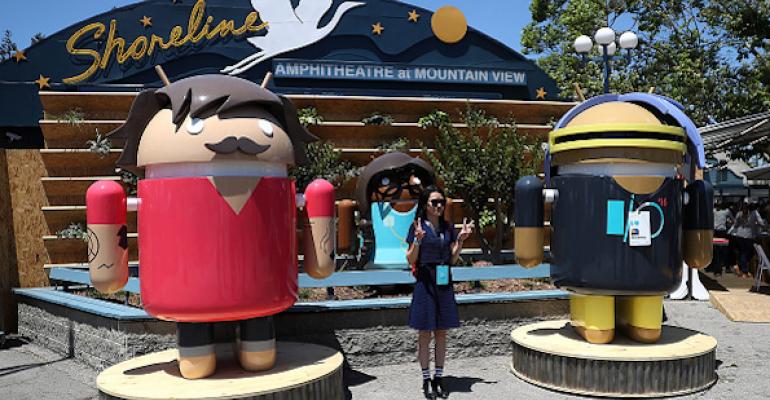 Analysis: A Smarter Google Wants to Be Around And With You, Always

Google wants its search engine at the heart of your work and home lives. If there’s a theme to be found in all the announcements, it’s that Google wants to be an omnipresent resource in many areas of your life. Google, of course, sees this as a force for good. Its keynote was a sustained demonstration of the company's commitment to creating and deploying tools that can organize and interpret large data sets.

“We believe that the real test is whether humans can achieve a lot more with the support of AI assisting them. Things previously thought to be impossible may in fact be possible,” said Google CEO Sundar Pichai.

From everyday questions to messaging, Google wants to be part of the conversation. One of those methods is with Google Assistant, an AI companion that marries the predictive knowledge of Google Now with a Cortana-style assistant. You can ask questions using regular language and get a follow-up answer or issue commands for your Internet of Things devices. You can also cozy up to Google's preferred business partners for all sorts of commerce, in everything from buying movie tickets to making restaurant reservations.

Google CEO Sundar Pichai pitched Google’s capabilities as an ever-present assistant that can help with all the (monetizable) details of domestic life, like finding out something in the news cycle, checking showtimes, or even turning off the lights to your child’s bedroom by connecting to smart devices.

“I think computing is poised to evolve beyond just phones. It will be in the context of the user’s daily life. It will be on their phones, other devices, their cars and even in their living rooms,” he said.”

Though of course this raises the always-present question of security. Google executives made multiple mentions of privacy and user choice during their presentations, hedging off the usual privacy issues that tend to arise when Google rolls out new products that tap deeply into its cloud.

Not content to cede the smart home market to Amazon’s Alexa, Pichai showed off Google Home. The hardware works similarly, with an always-on listener in Google who can answer your questions, turn off the lights, or even order you a pizza.

Mario Queiroz, a vice president of product management for Google, said the company’s years of efforts in language learning and research put it ahead of others that are trying to push ahead in this space.

“Google Home is unmatched in far field voice recognition since it's powered by more than ten years of innovation in natural language processing,” he said.

The hardware looks like a shrunken Alexa, and there’s a hint of customization by allowing buyers to choose different colors when the consumer product launches later this year.

A video demonstrated a family interacting with the device, which spat out driving directions, calendar appointments, and answers for a child's homework. The video did not, however, demonstrate whether or how Google Home can recognize authorized users versus unauthorized ones -- otherwise, what's to stop an impish friend or not-so-impish intruder from ordering 500 pizzas and charging it to the main user's accounts? Nor did the video or the keynote cover exactly how Google Home records and learns from user conversations.

Google may be kicking Hangouts to the curb. The company unveiled two new messaging apps: Allo and Duo, which pledge to change how you interact with conversation and take video calls.

The former bakes in Google Assistant and tries to learn your writing preferences over time in order to offer smart replies, much in the line of Google’s Inbox.

It’s also more interactive, using Google’s search powers to find pictures, GIFs, and book movie tickets or send map directions inside of a dedicated card. Whisper Shout is another method for adding a human touch to text messages, as it can expand or shrink the size of the text to denote if you’re really excited or just saying something softly.

The latter is basically FaceTime, with the added bonus that anyone who's video-calling is visible even before the recipient picks up. The upshot here: No more pulling faces before the person on the other end of the line picks up.

Why Google's not going after Skype -- one-to-many video calling is an underserved area with ample market opportunity -- remains a mystery.

Virtual reality is an area of big interest to Google, and the latest announcement is the  DayDream platform. Google detailed a design spec and sample headset, which looks very similar to Facebook’s Oculus Rift.

While VR may sound like far off technology, Google is jockeying with Microsoft and Facebook to be the one to deliver a platform for such experiences, leveraging its market share with Android to get into position. The demo it showed wasn't quite as buzzy as Microsoft's Hololens, and it's still not clear who Google's DayDream platform is aimed at. Hololens has made significant incursions into industry and educational deployment, while Oculus Rift has significant mindshare among gamers.

But if Google's worked on ways to insinuate itself into other markets -- Google Home is a direct Amazon Echo competitor, Google Assistant is a clear challenger to Apple's Siri and Microsoft's Cortana -- then its capacity to marry its data-crunching capacity with a convenient user experience will surely become evident in VR.