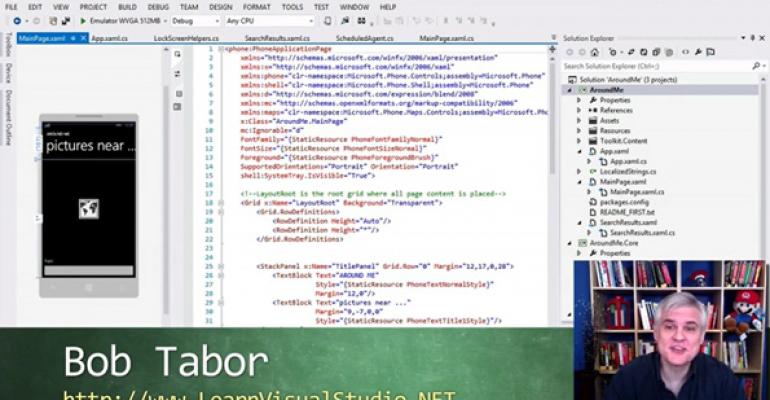 Bob Tabor is back with a massive, 35 episode video series detailing how you can learn to write apps for Windows Phone 8. Clocking in at an incredible 11+ hours of content, Windows Phone 8 Development for Absolute Beginners contains everything you need to master this platform.

This video series is of course the Windows Phone 8-based follow-up to Mr. Tabor’s previous effort, Windows Phone 7 Development for Absolute Beginners, which was released back in November 2010. I was a huge fan of that series and in fact watched virtually all of it, and the host has a great demeanor that makes the content really approachable. So I have high hopes for this series.

(Tabor also made a 24-episode video series, C# Fundamentals: Development for Absolute Beginners, which should be considered a starting point for the truly new: That’s because C# is programming language at the heart of the Windows Phone 8 development course.)

You can check out the list of episodes on Channel 9, but here’s Mr. Tabor’s description of the series.

“We approached this series of lessons as a tutorial...in other words, the series teaches how to build apps by walking through the steps required to build two full featured apps,” he writes. “Hopefully this approach will help you see how concepts fit together in a real app scenario. I'll also build a number of tiny apps just to illustrate some small concepts in hopes of clarifying fundamental ideas.”

“I'm also going to cover things like the operating system and hardware requirements, the software you'll need to install to get started, getting a developer license, designing an app, submitting to the store, and more. So, hopefully, this is a great starting point for developers new to Windows Phone 8 development.”

I can’t wait to get started. If you have any inclination about programming in general, or about developing for Windows Phone in particular, this is absolutely the way to go.