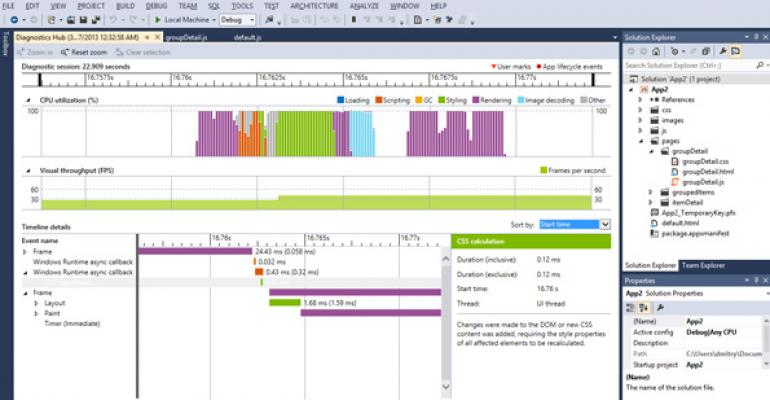 Last week, Microsoft released Visual Studio 2012 Update 2 (VS2012.2) that's now available for download. Not only does this release include bug fixes and performance improvements, but it also includes new functionalities that align with prominent trends in the software development industry. Microsoft is focusing on four different areas of investment for this release: agile planning, quality enablement, line-of-business development, and development experience.

In keeping with current industry trends, the initial Visual Studio 2012 release included several capabilities to promote an environment that's conducive to agile methodologies. With this release, Visual Studio 2012 is continuing to offer valuable functionalities for agile development by providing agile planning capabilities. The most notable addition in this update is several new features in Team Foundation Server (TFS) that make it easier for teams to conduct agile planning. For example, the Kanban board can be customized to accommodate for an organization's unique workflow and style, and team members can now share TFS work items through email from the web portal.

A primary tenet of Visual Studio 2012 is to provide developers with tools to maintain and improve quality throughout development cycles. Microsoft is demonstrating this commitment with its new Test Case Management tools in TFS. These tools not only let users author, edit, and execute test cases through the web portal, but also includes powerful profile unit test capabilities. The update also includes a slew of additional unit testing improvements that includes the following:

Improved Line-of-Business Development for the Enterprise

"As developers spend so much of their time using the IDE, it's important that Visual Studio provide as streamlined an experience as possible," noted S. Somasegar, corporate vice president of the Developer Division at Microsoft, on the importance of an optimal development experience in Visual Studio 2012. This update addresses this need by including several different functionalities to help make developers more productive.

For example, Code Map now features improved responsiveness and debugger integration that provides developers with a visual perspective of the relationships and dependencies in their code. This makes it easier for developers to identify and resolve development problems faster. Additionally, there's now unit testing support for Windows Phone 8 development, and a new responsive analyzer for HTML and JavaScript for Windows Store apps.

For comprehensive information on Visual Studio 2012 Update 2, visit the Developer Tools blog to read an announcement made by Somasegar. The bits are also available to download from the Microsoft Download Center. What do you think about Microsoft's latest update to Visual Studio 2012? Have you started using these functionalities in your development environment? Let us know in the comments or tweet to us using the handle @DevProConnect!