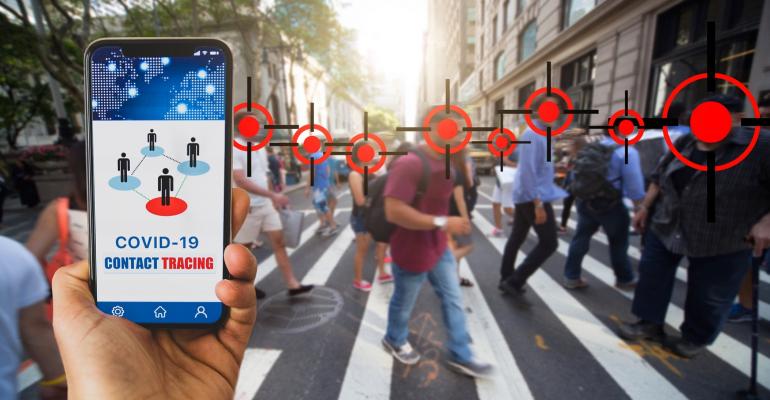 With hopes that they can slow the spread of COVID-19, ML-fueled contact tracing apps are attracting attention, but they must balance personal privacy and public safety.

Contact tracing has become more widely known thanks to COVID-19. Contact tracing applications are in early use in several jurisdictions and in development at a variety of enterprise firms — often in partnership with governments or non-governmental organizations (NGOs).

Machine learning (ML) plays an important role in the effectiveness of these applications. For example, a Montreal artificial intelligence (AI) lab uses ML on its Bluetooth-based in-development app, which is designed to protect individual user information, CBC News reported.

ML-fueled data visualization and analytics can make contact tracing, a job that is traditionally quite manual, faster and more effective, which is important during a pandemic. With machine learning algorithms, contact tracing apps can automate alerts and notifications, analyze huge amounts of digital data and otherwise make the tracing process less labor-intensive.

But that technology does need to be used with an underpinning of concern for individual privacy rights, says one ethics evangelist. The best practice for mobile contact tracing apps is to use Bluetooth instead of GPS, said Andrew Pery, of the digital intelligence company ABBYY.

“There are different approaches to leveraging the power of mobile devices to support effective contact tracing,” Pery said. “First and foremost, I think the fundamental policy consideration here is always balancing public safety and help with safeguarding privacy rights.”

Bluetooth helps meet that goal because it doesn’t include the same detailed location data as GPS generates, but still uses mobile devices such as smartphones to provide information that can be useful for contract tracing.

“It’s using the beacons that [the mobile device] emits in close proximity to some of the other mobile devices, which can then provide health experts and health industry administrators with the ability to determine who has been in contact, who might have been exposed to the virus, without necessarily exposing any personally identifiable information,” said Pery, who is writing a book on ethical data use for the American Bar Association.

This method of contact tracing has been used in other jurisdictions, including South Korea and Taiwan, with some success — though these applications, or the requirements for their use, would not necessarily fit with current U.S. regulations.

“They were quite successful in mitigating the spread of the virus, at the same time protecting and preserving personal information,” Pery said.

Although the use of Bluetooth instead GPS means that the data generated isn’t easily traced to a particular individual once removed from a device, the use of these apps still brings up important questions about ethical data use and machine learning, Pery said.

There are a growing number of AI ethics initiatives in various stages of development around the world. Both IBM and Microsoft recently signed the Rome Call for AI Ethics, the G20 has its own AI principles, and policies in the United States and United Kingdom aim for a balance between innovation and consumer data privacy. And in June, ABBYY launched its own policy and initiative for trustworthy AI.

There are also enterprise implications. Google and Apple worked together to release an API to allow iOS and Android devices to be interoperable when using contact tracing apps from public health authorities. The two tech giants continue to collaborate on building a Bluetooth-based contact tracing platform into their platforms.

Smaller companies may find themselves working on contact tracing apps for health authorities in their own jurisdictions. The effective use of these technologies does require significant adoption of Bluetooth-enabled devices because they rely on each other for the beacons — something that is not a problem in larger centers or areas where the use of devices like smartphones is high, but that is not universal.

However, when it can be done with adequate protections for personal privacy and data protection, these apps represent an important tool for the containment of not just COVID-19 but potentially other disease outbreaks in the future, Pery said.