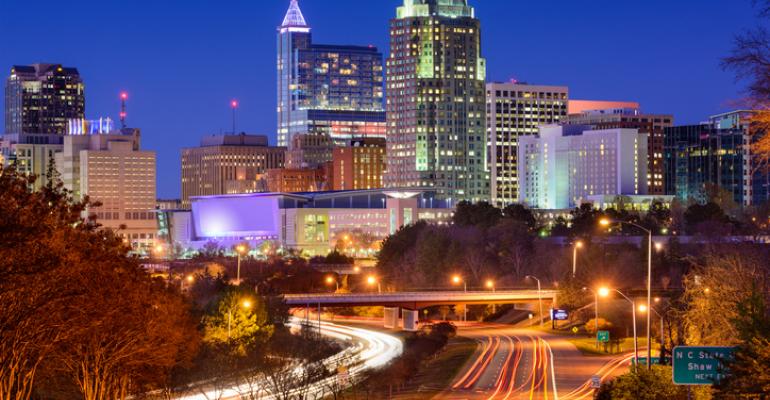 While the Raleigh area is proud of its booming IT economy, it's not sure it wants to become Silicon Valley East.

Talk very long to first time visitors at Raleigh's All Thing Open (ATO) conference and sooner or later you're bound to hear the city compared to Silicon Valley. New attendees are often wowed by their first impression of the scope of the local tech industry, sometimes from merely walking through the rows of vendor booths where there seems to be no shortage of local development houses doing well enough to afford vendor space in order to hawk products and do some networking.

They are also awed by the conference itself. This year well over 3,000 people shelled out somewhere around a couple of hundred bucks each to attend the two-day event, which took place earlier this week and utilized more than 20 meeting rooms at the Raleigh Convention Center to house over 200 sessions.

Those attending the conference only see the tip of the iceberg, however, and they're getting an incomplete picture of the area's tech economy.

They're seeing the conference. As large as it is, most of the IT related businesses in the region don't have a presence there. They're also seeing Raleigh, but the IT hub the city represents covers the entire Triangle, a metro area spanning three counties and includes the cities Durham and Chapel Hill as well as numerous small towns and suburbs. And at ATO, they're exposed only to open source, which certainly dominates the local scene, but not exclusively.

For example, it might not be obvious to out-of-towners at ATO that Red Hat isn't the only big-box tech company in town. SAS, the analytics software developer which shares with Red Hat roots going back to NC State University, is headquartered in the Raleigh suburb of Cary. Percona, a smaller but internationally known company offering open source database management solutions, is also headquartered in the area. IBM has a huge presence, occupying a campus of more than twenty buildings at R&D focused Research Triangle Park (RTP) where its Watson AI program is headquartered. Cisco and Citrix also have presences in the area.

But does this make the area something akin to Silicon Valley East? It depends on who's talking.

"I think that's fair," Larry Steffann told ITPro a few days before the ATO event. "There are certain positives to Silicon Valley and there are positives and strengths to the Raleigh and RTP area. I think they're complementary and there are similarities, but they have different strengths."

Steffann is co-founder of RIoT, a consortium of organizations involved in the IoT space that held an evening event at the convention center at the end of ATO's first day. That event was a testament to the importance of IoT to the region, as it drew an estimated additional 1,000 or so mostly local people to ATO's venue. Steffann is also general manager of the Wireless Research Center of North Carolina, a nonprofit centered around wireless antenna technologies.

"The word IoT can be a shoehorn into connected devices alone," he said, "but we look at it in a broader more instructive matter than IoT as most people perceive it. It's not devices alone. It has a lot to do with how you gather and use the data, with artificial intelligence playing a large role in this."

The Triangle's involvement in IoT includes everything from hardware design to software, including software development and engineering. One of the big drivers of IoT in the area is healthcare, centered around the presence of big pharma companies like GlaxoSmithKline, which has facilities at RTP, as well as health research projects being carried out at area schools, notably the University of North Carolina in Chapel Hill, Raleigh's NC State University, and Duke University in Durham.

One of the companies benefiting from the area's IoT boom in the healthcare field is Valencell, which supplies optical biometric heart rate sensors that are used in wearable devices. Ryan Kraudel, the company's VP of marketing, pointed out to ITPro that the IT opportunities coming from the local healthcare industry isn't confined to IoT.

"You've got companies like Allscripts, who is one of the top electronic health record companies in the world, headquartered right here," he said. "Obviously I mention a lot of the pharma companies, but also companies that are in the pharmaceutical industry, like the contract research organizations [CROs] that effectively do a lot of the chemical trials for pharma and drug companies, companies like Quintiles, PRA and others."

This isn't just some local rooting for the home team. When ranked by revenue, two of the top six global CROs are headquartered in the Triangle, Quintiles and PRA Health Services, with the other four all having offices in the area. As Kraudel indicated, it's a large industry, and they're all essentially technology companies. The combined annual revenue of the six companies is over $12 billion, with the largest, Quintiles, reporting revenue of $4.3 billion in 2015, making it roughly twice as large through Wall Street's eyes as Red Hat.

Kraudel pointed out that although the area's overall IT economy is anchored by big box players, part of it's success comes from nurturing entrepreneurs just getting started.

"You're starting to see a lot more of the ground level technology industry and businesses come up with things like the American Underground, that serves as an incubator or a platform for very early stage technology companies to be able to get a start," Kraudel said. "Even if it's just two people and an idea, they've got space, mentorship and infrastructure to be able to build up a business from scratch. That's not something that has existed here in the past, but you're certainly starting to see those types of organizations."

The American Underground is something of a one stop shop for pre-startups in need of help. Headquartered in the old American Tobacco Company factory in downtown Durham, the facility offers accelerator and incubator programs, a tech training academy, and space for 10-15 person startups. At a second location near Duke University, the organization offers a mix of 2-5 person private offices and co-working desks. A third facility in downtown Raleigh, a short walk away from Red Hat's headquarters, houses the Iron Yard Code Academy as well as conference rooms, kitchen area, and coffee bar that can be used by all American Underground startups. The organization recently added a fourth location that offers premier office space for startups that have grown and matured.

RIoT's Steffann agrees that nurturing startups is a key factor in the area's success both as a technology and open source hub.

"We have just exploded in terms of the number of incubators we have in the region and throughout the state, and the state embraces that," he said. "I think those things make this much more of an environment for growth of open source technology and open source community."

In addition, Steffann points to the region's educational system for the growth of the area as a technology hub.

"I think you have this tremendous resource of graduates out of the university system," he said. "Many of the university students who come out here want to stay in the region, so there's kind of a contagious effect. Is it a chicken and egg discussion? Would they not stay if companies like Red Hat, IBM, Cisco and SAS were not here? You can make that argument too. But they're here, and these guys are staying. Meanwhile, many of them are willing to be lone wolves and start their own companies and act entrepreneurial as well."

Michael Levy, CEO and co-founder of Bluedoor, a digital health-based networking company in Chapel Hill, said that one of his company's mandates is to "work with digital health start-ups and entrepreneurs to take their product from design and development." It's not surprising then, that he sees coming-to-market startups as "incredibly important" to the area's tech scene.

"In a lot of respects, technology and technology companies' R&D comes from the acquisition of small technology and development shops that are three to ten people or bigger, but not so big," he said. "They're doing great things. They're anchoring down on a specialty, and then they get either acquired or fueled from a capital perspective to grow and spur economic growth and jobs. Without the entrepreneurial underpinning that allows for technologists to be successful independently in small groups, you'd lose the richness of R&D that exists in your ecosystem. If you lose that, then you lose your pipeline."

That pipeline includes recruiting and keeping tech workers, which takes more than merely employing headhunters. Levy pointed to cultural efforts being made to attract technologists to the area, citing a successful effort to get the popular electronic music Moogfest festival to make a more than 200 mile move from its Western North Carolina home in Asheville to Durham.

"The purpose, from a strategy perspective, is to say, what programs and events can we bring to our geography to recruit and keep our technologists happy," he said. "Moogfest was an opportunity to bring a technology-based arts festival here and to say, 'Hey, if you're a technologist, there's more than just work, there is life and we can cater to that.'

So, does all of this make the Raleigh area Silicon Valley East? Levy thinks not. That would be placing limits on the area, as well as being unfair to cities such as Atlanta and Nashville which are also vying for recognition as technology hubs. The folks in the real Silicon Valley probably wouldn't be too happy about it either.

"I think we should be developing our own definition and our own brand," he said. "There might be a better way of suggesting that we're a hotbed. I don't know what that is, but from a knee jerk reaction perspective I feel that Silicon Valley East might be hard to digest on a couple of different levels."

"There's no replicating what's going on in Silicon Valley," he said, "but I think there are opportunities to create technology hubs centered around different focus areas. So open technology, and open source technology specifically, is obviously an area of expertise in this area, given Red Hat's development and all of the expertise they have, and spin outs of that talent pool and capabilities."

Fair enough. In the end, calling the Raleigh area Silicon Valley East would be like calling San Francisco "New York City West." Nobody would be happy with that.