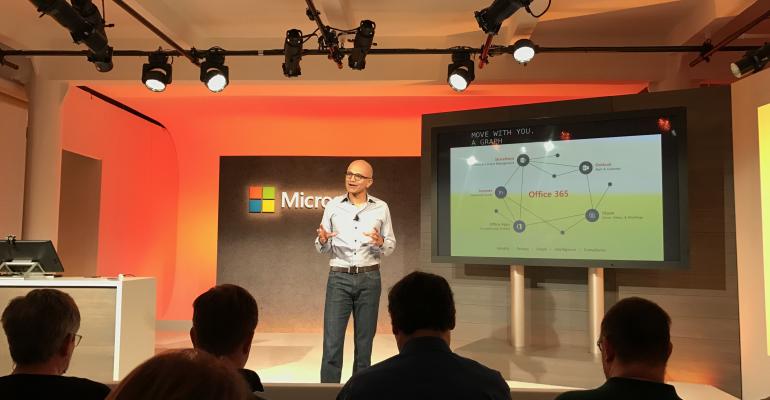 What would Outlook look like in a post-email world?

Microsoft thinks it has created a way to bring those teams together in a more seamless, conversational, and focused way than ever before.

Just like Outlook brought together email, contacts, calendar into this one magical user experience scaffolding that changed how we work, Microsoft Teams will bring together chats meetings, notes, office planner, Power BI and a host of other ecosystem extension and applications to help teams get work done, he said. This is an experience that truly empowers the art form of how work is done

The art of high-performance teamwork was a common theme throughout the day's event, with frequent athletic metaphors (from crew teams to racing crews) mixed in with nods to enterprise integrations like Asana and fun touches, like Giphy integration.

Microsoft emphasized that Microsoft Teams wasn't for everyone, but instead focused on high-performance teams (I haven't yet seen their product marketed toward low-performance teams, but I'm keeping an eye out).

Left unmentioned was Microsoft's growing rivalry with Slack, which, similar to Salesforce in the CRM market, infiltrated corporate communications channels from the ground up to become the fastest-growing enterprise application, and cocky enough to take out a full-page ad in the New York Times poking at Microsoft's new offering.

On the surface, the two are fairly similar: Persistent chat, copious fun touches like plentiful GIF and emoji usage, and universal search tools to let you quickly hop back to the pertinent information you need, when you need it.

But there are some stark philosophical and technological differences.

While Slack worked its way in through the backdoor of many IT departments with a free tier that anyone could bring into their business, Microsoft Teams can only be used through an Office 365 Business or Enterprise subscription.

And while Slack is quietly building up its identity play to take on Active Directory, Microsoft can take advantage of all the identity graph access it already has with those in the Office 365 ecosystem.

Need to know who to reach out to with expertise in your billing system? Microsoft Teams Who-Bot can scan through public documents to find out who talks about billing the most and point you in their direction. Need to finalize some details on a presentation in SharePoint? That presentation is already available within Teams, and a persistent chat just about that presentation is stored so you don't have to waste time searching for the discussion.

The model Koenigsbauer used was that of the open office plan, making things more visible across teams so everyone stays in the know ... and so everyone has a voice.

And while that open office plan works to provide more flexibility for end users — they can create channels and add integrations on the fly — it builds off many existing technologies and provides a familiar security and user management architecture for IT.

For example, each team within Microsoft Teams is equivalent to a 365 Group, and the video chat used within the app is built on the same infrastructure as Skype for Business (although Teams to Skype for Business video and audio calls are not supported).

The connector model used within Teams is the same one used by Exchange.

But for some users, Teams might be the only interface they end up using for a number of familiar Microsoft tools: For example, Teams tabs let users get a peak and interactive with data from SharePoint, meaning that files are accessible without ever leaving the Teams app.

And integrated apps will go a long way beyond Microsoft's own offerings: Microsoft representatives promised 150 integrations by General Availability, which is slated for the first quarter of next year.

A preview is available now for Business Essentials, Business Premium, E1, E3, and E5 customers, and can be turned on in the Office 365 admin center.

Microsoft Teams is not available for on-premise users that don't have a hybrid component.

Slack pokes at Microsoft's Slack-killer — before it even launches
Nov 02, 2016

How To: Activating and Configuring Microsoft Teams in the Office 365 Admin Center
Nov 03, 2016