/sites/all/themes/penton_subtheme_itprotoday/images/logos/footer.png
Recent
Recent
Apple and Microsoft’s Rivalry Had Cooled. Now It’s Back and Getting Testier
May 14, 2021
DarkSide Hackers Mint Money With Ransomware Franchise
May 12, 2021
Red Hat Talks CentOS Past, Present, and Future
May 11, 2021
Thinking About Cloud vs On-Prem vs Colocation Has Gotten Smarter
May 11, 2021
Hackers Find Easy Prey as U.S. Ignores One Warning After Another
May 11, 2021
Featured
Is There Room for Linux Workstations at Your Organization?
Aug 07, 2020
Mozilla Shrinks to Survive Amid Declining Firefox Usage
Aug 18, 2020
Survey: Open Source Cloud Technologies Fit Devs Like a Glove
Feb 12, 2021
2020 State of AI Survey Report
Jun 30, 2020
ITPro Today Guest Blogs
brought to you by 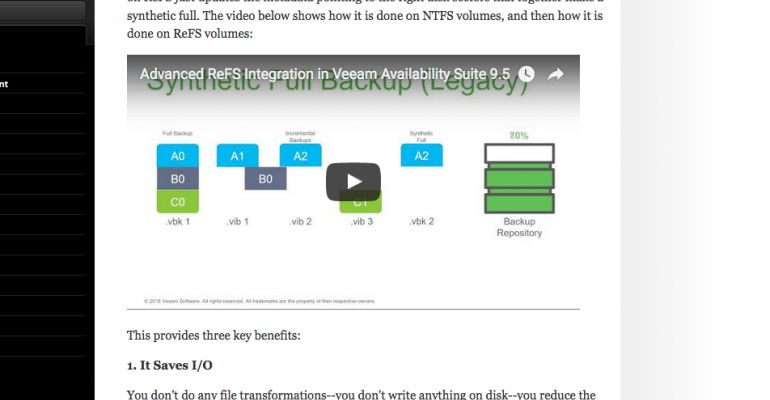 Why ReFS Is the Recommended File System for Windows Server 2016

ReFS claims to dramatically reduce storage space, the amount of I/O and the server load. Let’s see how.

Do you do regular backups? I hope you do. If so, you know why most of the jobs are scheduled during non-working hours: because the load on the production machines using traditional NTFS volumes is very high, especially during a synthetic full backup. It happens because of the transformation operations with backup chains. Backup software is copying the blocks from one place to another, consuming I/O, storage space and time.

ReFS 3.1 is designed to eliminate all this. It uses a technology called fast cloning, provided by the block cloning capability. Instead of moving the latest data blocks to create a synthetic backup, block cloning points to already-existing blocks. This means you don’t have to read and then write selected blocks again--you already have all the necessary data blocks on the disk. Instead of copying the same information, a Veeam Backup Repository on ReFS just updates the metadata pointing to the right disk sectors that together make a synthetic full. The video below shows how it is done on NTFS volumes, and then how it is done on ReFS volumes:

You don't do any file transformations--you don't write anything on disk--you reduce the I/O. Thus, you remove one of the heaviest loads on the host during a backup job.

Because of the block cloning capability, these full backups on disk do not consume all of their space requirements. As a result, you can create several full backups on the disk that would share the same data blocks. We call this "Spaceless full backups."

Our lab showed very significant time-savings during synthetic full backups--36 times faster as compared with NTFS volume! When there is more data involved, the time savings will be even greater.

You might think that a situation in which several files rely on the same data blocks might lead to a single point of failure, but Microsoft thought about this already. The data integrity streams feature monitors for silent data corruption and will notify you if anything happens. This comes when using ReFS in conjunction with Storage Spaces.

So whenever you set up your backup repository, make sure you use ReFS with new Windows Server 2016. This is a really awesome feature from Microsoft, so don’t ignore it. For more information on Windows Server 2016 virtualization, click here.

Dmitry Kniazev is a technical product marketing coordinator for Veeam and is based in Saint Petersburg, Russia. Dmitry specializes in virtualization, Linux and data availability. Read Dmitry's blog at VMDK.CO.