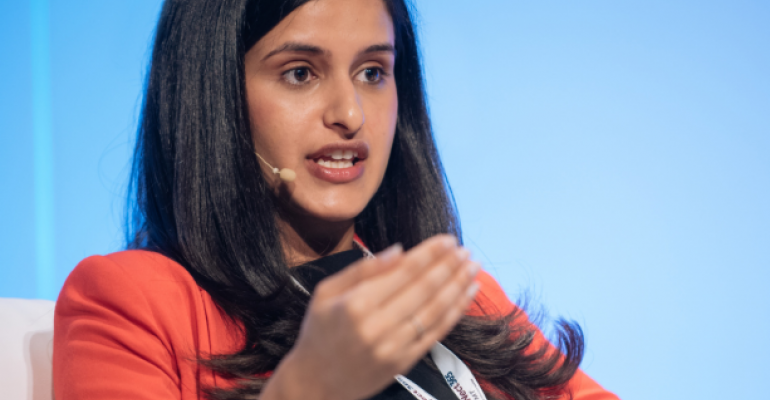 Devina Pasta brings a decade of digital industrial experience to her role at Siemens. Previously she oversaw trains and heavy industry; now she's responsible for digital transformation in the energy sector.

The Siemens chief digitalization officer for power and gas took the stage multiple times at IoT World Europe and TechXLR8 this week, as a keynote speaker, panelist and TechXLR8 “change maker”, to share her considerable wisdom around digital transformation. When the time came to highlight one industrial digital example that all others should take note of, one in particular sprang to mind.

A rail operator client of Siemens was competing against a flight covering the same route and needed more passengers. They had the edge when it came to journey time, but only narrowly – a 20-minute delay was all it would take to make flying a preferable option. Frequent delays would be particularly disastrous to their business.

Through the combination of many sensors, advanced analytics reporting on train components and predictive maintenance, that rail operator now sees 99.9 percent of its trains run on time. More importantly, they saw a 60 percent increase in passengers switching from plane to train.

The Siemens' chief also shared her recommendations for avoiding “pilot purgatory,” where IoT projects stall at the pilot phase and are never fully rolled out. She emphasized the need for domain “know-how,” where the team running the project has comprehensive data analytics skills and the relevant experience of putting those talents to use in their particular industry.

The platform in use must be suited to scaling, as the ability to run a pilot does not mean the same platform can scale to cover an entire business. Similarly the information technology and operations technology teams involved must be seamlessly in sync, Pasta says. It’s easy to run a pilot and think all IT/OT issues have been resolved, only to discover that the surface has only been scratched and the bigger pictures brings many more problems with it.

The main theme at this year’s IoT World Europe seems to be dispelling the assumptions of recent years. The Government Technology Agency of Singapore (GovTech) showed that governments don’t have to move slowly when trying new technology – and made it abundantly clear why Singapore is commonly hailed as the world’s smartest city. Airbus Defence & Space said that the value of any new technology or partner should be quickly measured by the revenue they generate, and nothing less. Not too long ago, many were saying that the ROI of these ventures could only be judged in the long term.

Every sector has a clear leader in the IoT space to relate too. It appears there’s now no excuse for industrial companies not to learn from those best practices and get to work on their own IoT strategies, for pilots and beyond.