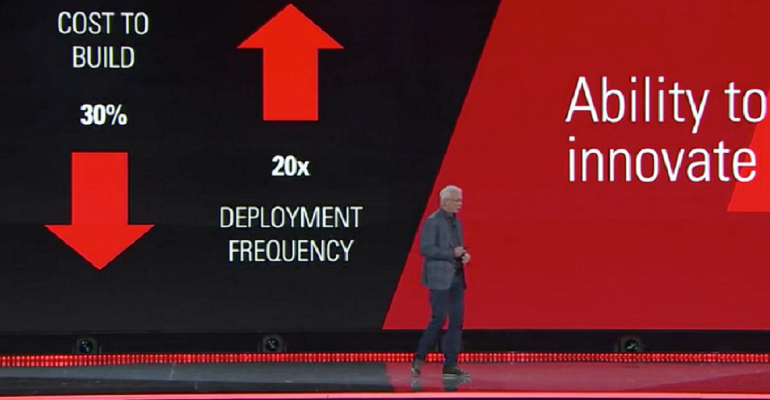 Vanguard Accelerates Innovation with Migration to the Cloud

After attending a cloud conference four years ago, the financial services firm found that it had to move to the public cloud if it were to accelerate innovation.

Migration to the cloud offers not only the potential for improved cost efficiencies but also the opportunity for companies such as The Vanguard Group to innovate faster.

Vanguard – one of the largest financial investment companies in the world, managing $5.7 trillion in assets, with more than 30 million customers – began its journey to the cloud in earnest in 2015. That year, some of its employees attended the Amazon Web Services (AWS) re:Invent conference and came away realizing that migration to the cloud was a strategic imperative. Four years later, Vanguard IT Executive Jeff Dowds (pictured) was on the stage at re:Invent 2019 in Las Vegas earlier this month detailing his company's experience so far in migrating to the cloud and where it's headed next.

"Back in 2015, we sent three of our cloud architects to re:Invent. Upon their return we knew we could not compete with the cloud-based services being delivered by AWS," Dowds said. "We also knew that building a private cloud was going to take too long and be too expensive."

Vanguard had initially planned on developing its own cloud services but instead decided to make use of public cloud resources on AWS to exercise its cloud strategy. Vanguard's goals were to move away from its own managed data centers, migrating monolithic applications that were up to 50 million lines of code long.

The Path to the Cloud

The Vanguard team developed design guidelines for the migration to the cloud that put security first, given that the company works in a heavily regulated industry, Dowds said. Those guidelines led the company to first build out more than 150 different security controls to make sure that when its applications moved to the cloud, they would be secure.

Part of the security posture involved making sure that connectivity between Vanguard's on-premises assets and the cloud was secure. It's a process that involved using the AWS Route 53 DNS service, as well as Web Application Firewall (WAF) capabilities and the CloudFront content delivery network (CDN) service. Vanguard also moved from using a virtual private network (VPN) to the Direct Connect service that provides a dedicated connection to the AWS public cloud.

The first workloads that Vanguard moved to the cloud were some of the company's web applications. From there, the company wanted to migrate its large on-premises big data platform, according to Dowds. That led to Vanguard adopting AWS S3 storage and the EMR (Elastic MapReduce) service, which helps enable big data workloads in the cloud. Vanguard has also embraced a serverless approach with the AWS Fargate service, which enables containers to run as needed in a managed service.

By using the public cloud and specifically AWS, Vanguard has been able to reduce the cost of compute by at least 30%, according to Dowds. He added that Vanguard is also able to build and deploy software faster.

"All this leads to a better ability to innovate, and along the way we get improved resiliency," Dowds said.