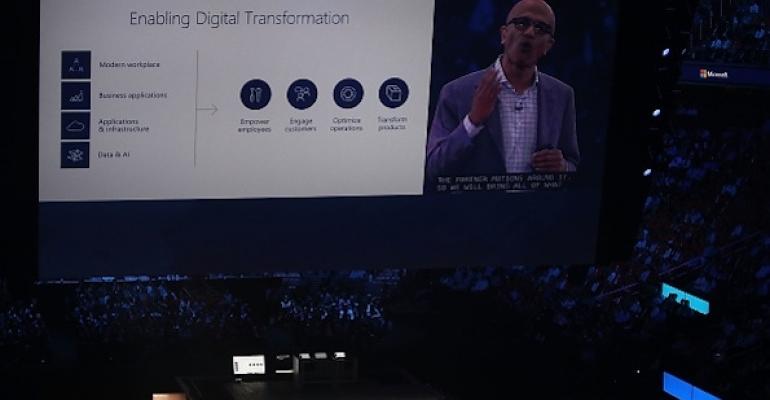 From Mobile-First to Intelligent Clouds: Microsoft Repositions Itself for a Data Economy

It's no longer a mobile-first-cloud-first world.

In Microsoft's annual report, filed with the SEC, the company quietly inserted a vision statement reading:

Microsoft is a technology company whose mission is to empower every person and every organization on the planet to achieve more. We strive to create local opportunity, growth, and impact in every country around the world. Our strategy is to build best-in-class platforms and productivity services for an intelligent cloud and an intelligent edge infused with artificial intelligence (“AI”).

The way individuals and organizations use and interact with technology continues to evolve. A person’s experience with technology increasingly spans a multitude of devices and becomes more natural and multi-sensory with voice, ink, and gaze interactions. We believe a new technology paradigm is emerging that manifests itself through an intelligent cloud and an intelligent edge where computing is more distributed, AI drives insights and acts on the user’s behalf, and user experiences span devices with a user’s available data and information. We continue to transform our business to lead this new era of digital transformation and enable our customers and partners to thrive in this evolving world.

This statement isn't too much of a surprise -- the company was very open about its commitment to AI through all its keynotes at Build 2016. What is notable, however, is how the company's vision statement basically assumes the mobile-first, cloud-first paradigm has already done what it's supposed to, and it's time to move on to the next stage of computing.

Have we really moved to a cloud-first, mobile-first world? The research numbers suggest users -- not enterprises but end users -- already completed the transition. As Pew Research reported:

Smartphones are basically dead even with computers, and when you look at the trend lines for ownership, mobile devices like smartphones, laptops and tablets are logging faster growth than desktop computers.

Smartphones have a tremendous market saturation, especially among younger adults: 92% of Americans aged 18-29 own one, as do 88% of adults aged 30-49 and 74% of adults aged 50-64. Even among the population segments where smartphone ownership is "low," more than 50% of people in those groups own a smartphone.

So there's fairly compelling evidence that we're firmly in a mobile-first world, with some room for market share growth in some population segments (for example, 67% of rural residents own a smartphone compared to 79% of suburban residents, so there's room for growth in a rural market).

So we're mobile-saturated at least, which is a necessary component for being mobile-first. What about cloud-first? The fact that emerging generations of workers have been educated using cloud-based tools suggests that the idea of installing software from compact discs on a local drive is going to seem as quaint as writing a letter on a typewriter. And when you think about the adoption rates for streaming services (a majority of music industry revenue now comes from that model) and cloud-based storage and collaboration (there's a reason Dropbox is a leader in Gartner's Magic Quadrant, with more than 50% of Fortune 500 companies using it), the hard part of cloud adoption -- getting people to accept the idea that their digital assets and work do not live on their computer -- is already done.

Microsoft did not double down on AI because it was all, "Well, our work in mobile and cloud paradigm shifts is done." There are solid business reasons for them to position themselves as the company where AI augments and extends user productivity.

First: The data-driven economy is worth billions of dollars. Being able to collect data is one thing -- it's easy to automate and sort. But being able to apply insight as to why that data is important or how it might be used is a human task, and Microsoft is positioning itself as the tool to help people turn terabytes of data into steady sources of revenue.

Second: Machine learning and artificial intelligence will reduce business expenses, and that's tremendously appealing to any company. The last thirty years of office-work applications were all about assistive technology, i.e. calculators to do the math for you, spreadsheets to run the numbers, spellcheck to catch your mistakes. The next step is augmentative technology, i.e. tech that takes the parts of your job that rely on repetition, data recognition and consistent results, then does them for you.

Microsoft is already training users to accept augmentative technology in terms of time management and workflow. That's only a first step.

Third: AI can and will increase human engagement with technology, whether through talking to your assistant or using augmentative capabilities to handle low-stakes tasks. If you are a technology company, you want to be indispensible to your customer base.

Microsoft's new vision statement outlines the company's plans to amp up its Azure offerings, move into more industry-specific products with data-crunching tools, and boost end-user engagement. We'll see whether they succeed in defining a new daily AI paradigm for user and enterprise.