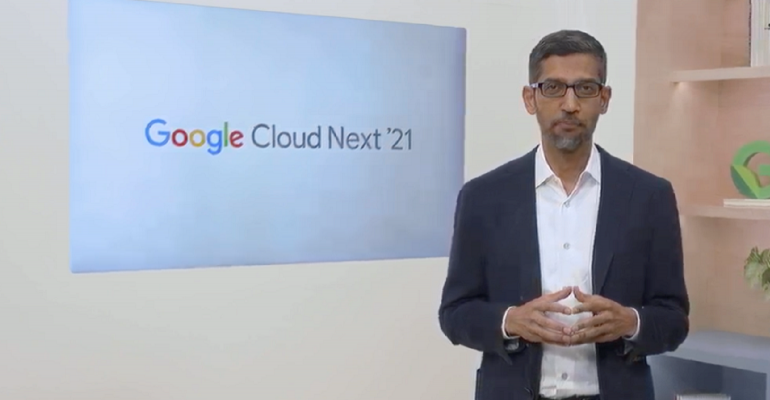 At Google Next '21, the cloud giant announced a series of distributed cloud services alongside new tools to help organizations reduce their carbon footprint in a bid to help slow climate change.

Google is expanding the reach of its cloud with a new set of offerings it's calling Google Distributed Cloud.

"Customers want to expand where they use Google Cloud, whether in their private data centers or out on the edge," Thomas Kurian, CEO of Google Cloud, said during the Next '21 keynote address. "For instance, some workloads cannot move to the public cloud entirely due to the need for large amounts of local data processing, extremely low latency or strict regulations."

Google Distributed Cloud is a portfolio of fully managed hardware and software that extend Google infrastructure to the edge as well as customer data centers, Sachin Gupta, general manager and vice president of product for IaaS at Google, explained in a press conference.

"This portfolio allows customers to focus on applications and business initiatives, rather than the management of their underlying infrastructure," he said.

Google Distributed Cloud Edge can be deployed across either a customer edge, a telecom operator's edge or one of Google's own global network edge locations, according to Gupta. The Cloud Edge service enables communication service providers to run core network elements at the edge, allowing them to offer their enterprise customers high-speed bandwidth with private 5G cellular connectivity and localized compute.

"By moving compute nodes closer to the user, together with our telco partners we can reduce latency levels and offer a whole new range of mobile experiences that were simply not possible before," Gupta said.

"[Google Distributed Cloud Hosted] provides a safe and secure way to modernize an on-premises deployment without requiring any connectivity to Google Cloud," he said.

Both the Edge and Hosted services have at their core Google's Anthos technology, which uses the open-source Kubernetes container orchestration platform to deliver services across hybrid cloud deployments. Anthos is a multicloud application modernization platform that provides a cloud back control plane for consistent operation at scale, according to Gupta.

Google Wants Cloud to Have Less Impact on Climate Change

Across its cloud services, Google is also looking to help organizations use less energy to aid climate change efforts.

"Having this data at your fingertips is really important," he said.

The ability to act on—and improve on—sustainability data is also part of Google's efforts. Plus, a new tool will alert organizations when there are idle workloads and make recommendations to reduce carbon emissions.

"It's all part of our goal to help make your cloud transformation secure and sustainable, and solve for what's next," Pichai said.