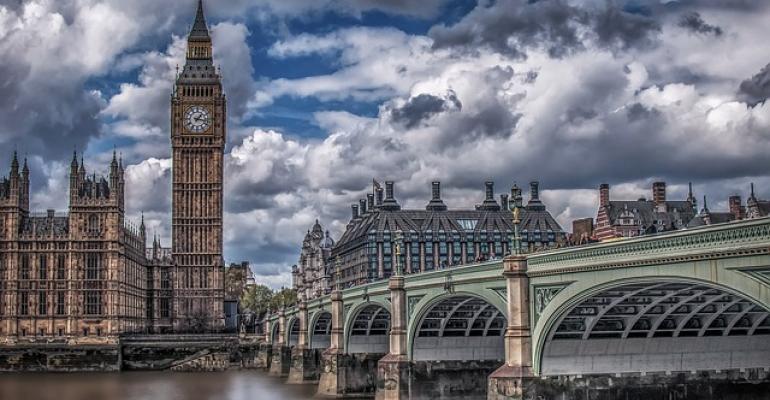 Microsoft kicked off the two-day conference in London today with a keynote for business leaders, which featured Panos Panay and Julia White talking about hardware, software and the cloud.

Earlier this year Microsoft hosted more than 30,000 attendees in Orlando, Florida, for its annual Ignite and Envision conferences and today some of the themes shared during those events were once again highlighted in front of a full venue at the ExCel in London as the company kicked off Future Decoded.

Themes of digital transformation; democratizing data; and the merging of hardware (Surface), software (Windows and Office) and the cloud (Azure) were frequently touched upon throughout the entire session.

The event, which was live-streamed using the Skype For Business Broadcast technology, was kicked off by Microsoft UK's Chief Operating Officer, Clare Barclay, who started with a discussion about the future of technology with Wired's editor in chief, Greg Williams.

She then introduced Jean-Philippe Courtois, Microsoft executive vice president and president of the company's Global Sales, Marketing & Operations. He spoke about digital transformation, a standard of most any Microsoft keynote these days, and how all businesses have to be moving toward this shift in their approach to technology across a wide range of areas. He went on to remind everyone of Microsoft's mission statement and how the company is working toward empowering every person and every organization on the planet to achieve more.

Next up was a slide we have seen from Microsoft CEO Satya Nadella in the past that has taken over for the company's "mobile first, cloud first" approach and focuses on the company's efforts in the cloud: Microsoft defines "intelligent edge" as all of those devices that we use in our daily lives that produce data. Whether it comes from an IoT device, your mobile Android device or a Surface laptop running Windows 10, all of this data is important to our daily existence and must be considered as it used. Microsoft believes its Azure cloud services is the path to that experience.

Courtois continued as he reminded everyone that digital transformation comes from four key areas:

All of those areas are enabled through the Modern Workplace, Business Applications, Applications & Infrastructure, and Data & Artificial Intelligence.

As I mentioned earlier, these are all familiar themes for anyone who follows Microsoft, but it sets things up for the company as it gets ready to share this vision with business leaders at Future Decoded.

Another critical thing that enables digital transformation is the tools that are used by employees, and Microsoft's line of Surface hardware is the company's North Star for empowering employees.

Panos Panay, Microsoft's corporate vice president for devices, came on stage next with the familiar backdrop of Surface devices to talk about how Surface comes together with Windows 10, specifically the recently released Fall Creators Update, and Microsoft Office to enable personal and professional creativity. Of course, the passion that Panay has about Surface hardware comes across as it does anytime he speaks about the product. On stage he demoed Surface Studio and Surface Hub along with collaboration capabilities that allowed someone in London and Redmond to be working on a project at the same time without limitations of time and location. As he stated during the keynote, collaboration is critical for the modern workplace and this is a great example of how that can happen easily with the right tools.

Panay cited the statistic that in three years 50% of the workforce will be mobile, and along those lines he confirmed that the Surface Pro with LTE Advanced will be available for business customers on Dec. 1. That is exactly what Rich Woods from Neowin learned during Ignite when he attended a Surface Engineers session on the hardware line.

This latest addition to the Surface hardware line will enable those mobile employees to always be connected thanks to the device's Cat 9 modem (up to 450 Mbps download) and connectivity to 20 cellular bands around the world.

He reiterated that the new Surface Book 2 13-inch device will be available in the UK in November and confirmed for the first time that the 15-inch model will arrive for the UK in early 2018.

You can learn more about the Surface Pro with LTE Advanced in this engineers tour of the device on Microsoft Mechanics.

Next up at the Future Decoded Keynote in London was Microsoft's Julia White, the company's corporate vice president for Azure and security marketing. She focused on the third element of the triad of products/services from Microsoft that can help with digital transformation: the Microsoft Azure cloud.

She started off by showing everyone the path to digital transformation when it comes to the cloud and associated data through Microsoft Azure: Moving towards Digital Transformation in the Cloud

Interestingly, White spent a few minutes clarifying what the hybrid cloud is and is not because, as she put it, there is a lot of confusion across businesses and the industry in general about this and she wanted to make sure it was clear.

As she described it, the recent discussion has been focused on public versus private cloud but it has now moved to a hybrid cloud. The hybrid cloud means you are using the cloud through on-premises equipment, which may in fact be in your building and under your control. During Microsoft Ignite the company announced more details about Azure Stack with the ultimate goal of providing customers a consistent cloud experience whether they are on-premises or fully invested in the Microsoft cloud. This explanation at Future Decoded fits in with the company's approach that the cloud is the cloud however you get to it. It just wants that experience to be seamless.

White also shared that 90% of Fortune 500 companies are now using the Microsoft cloud: Four years ago that number only included 50% of the companies on the Fortune 500 list; that is an average growth of 10% each year. While these organizations likely use more than one cloud provider, investment in the Microsoft cloud across this number of high-profile companies is no fluke. It is a testament to the quality and range of capabilities the service offers. While there have been a few newsworthy stories recently about moves from Microsoft products and services in the last few weeks, the company is retaining more enterprise customers by a large percentage and continues steady growth.

Last week's financial results show the company's efforts are paying off as it competes against Google and Amazon for its own piece of the cloud pie.

The last segment of today's Future Decoded keynote in London focused on how Microsoft is impacting people with its technologies and research.

Haiyan Zhang, innovation director at Microsoft Research in Cambridge, UK, shared the background and story of Project Emma. This work resulted in a prototype device called the Emma Watch, named after Emma Lawton, a graphic designer with Parkinson's disease. The device short-circuits the effects of Parkinson's and allows Emma to write clearly for the first time in many years.

Research like this can help the more than 10 million people who live with Parkinson's and provide them capabilities that many of us who are healthy take for granted.

Watch more about this story here:

Microsoft and other tech companies are making it a point these days to show how their technology is impacting people, and frankly, it is inspiring to see this type of work making itself known through these high-profile events.