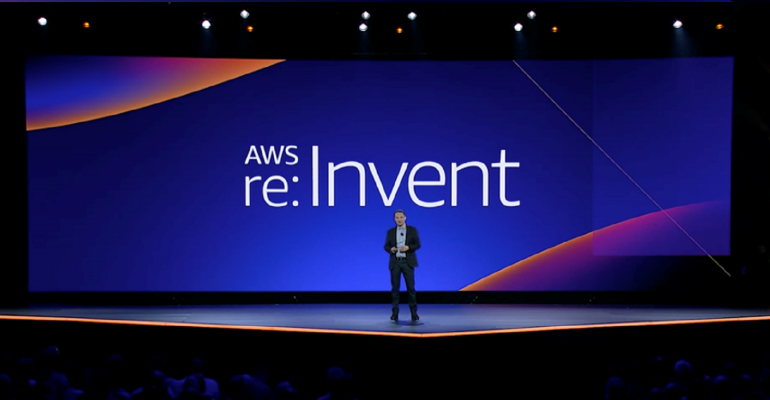 In his first keynote as CEO of AWS, Adam Selipsky recounted the history of the cloud and revealed new services, including a Private 5G mobile offering.

Adam Selipsky delivered the opening keynote at a re:Invent conference on Nov. 30 for the first time as the CEO of Amazon Web Services. During his two hours on stage at re:Invent 2021, Selipsky provided a history lesson on the evolution of the cloud and announced a series of new services.

Selipsky (pictured) became the CEO of AWS in May, taking over for Andy Jassy, now the CEO of Amazon, replacing founder Jeff Bezos.

AWS was created 15 years ago, and in the early days, Selipsky said he had a hard time explaining to people what the cloud was.

"Looking back, I do remember the perplexed looks on people's faces when I tried to explain AWS and the cloud," he said. "I can't tell you how many times I was asked, ‘What does this have to do with selling books?’"

Fifteen years ago, Amazon was primarily an online bookseller, and Selipsky commented that AWS is the technology that Amazon uses to sell books. As the first cloud provider, AWS had to prove to companies the value of running their applications on a new infrastructure platform, he said. While there were many skeptics in the early days, history has proved the value of the cloud. According to Selipsky, Amazon's S3 cloud storage service today stores more than 100 trillion objects, and more than 16 million new instances are spun up on the EC2 virtual compute service every day.

"In the 15 years since we launched AWS, the cloud has become not just another tech revolution, but an enabler of a fundamental shift in the way that businesses actually function," Selipsky said.

Among the many announcements made by Selipsky during his keynote at re:Invent 2021 was the launch of the new Graviton 3 ARM chips.

Graviton is AWS' custom-designed silicon architecture that debuted in 2018 and has been improved upon in the years since. Selipsky said Graviton 3 will be faster than prior generations of the ARM chip, while using 60% less energy for the same performance as comparable x86 instances.

Looking beyond just providing new compute capabilities, AWS is now also building out a private 5G service that organizations can consume as a service.

"I'm happy to launch AWS Private 5G, which is a new service to make it easy to deploy and manage your own private global network," Selipsky said.

With AWS Private 5G, an organization can get all the benefits of mobile cellular technology without the pain of long planning cycles, complex integrations and high upfront costs, he said.

"You tell us where you want to build your network and specify the network capacity," Selipsky said. "We ship you all the required hardware, the software and the SIM cards, and once they're powered on, the Private 5G network simply auto-configures and sets up a mobile network that can span anything from your corporate office to a large campus to factory floor or a warehouse."