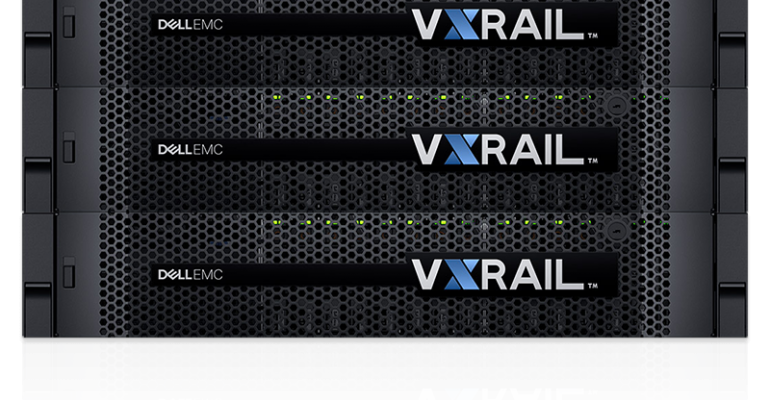 Dell EMC Brings VxRail to the Edge with G560

Nobody should be surprised that Dell EMC had a large presence at VMworld in Las Vegas a few weeks back. After all, Dell's 2016 acquisition of VMware's parent EMC made Dell Technologies a majority stockholder in the virtualization company. Even though VMware, for the time being, stands alone as an independent company, it's really Dell's baby.

There's also no surprise that Dell was pushing VMware on its metal. It has skin in the game and selling VMware on Dell hardware is a one-two punch in the profits column. Besides, everyone at the VMware lovefest was there with the purpose of promoting their products ability to integrate with VMware.

And like everyone else on the showroom floor, Dell EMC was there to sell products.

Specifically, Dell was there to preach the gospel of Dell-branded hyper-converged infrastructure (HCI), along with the company's mantra of "edge to core to cloud." When it introduced projects and products during a keynote, it announced a new HCI platform, the G560 VxRail appliance that's based on the Dell PowerEdge 14th generation server. The four node appliance is designed for deployment at the edge, or anywhere else where space is a premium and takes up only 2U of rack space, which equates to a mere 3 1/2 inches. Also, because it's being pushed for use in locations where support might be minimal, it's designed to be easy to set up and operate.

"A lot of the time we spend in innovating VxRail is around automation," Chad Dunn, VP product management for Dell EMC's hyper-converged portfolio, told ITPro Today at the conference. "Automation of the first run includes installation of vSphere and vCenter, setting up vsan and the cluster, and then being able to lifecycle manage that entire cluster as a unit on an ongoing basis. It's really taking market-leading hypervisor and market leading software-defined storage, and putting that extra amount of automation and management around it so it's very, very easy for customers to use."

To illustrate the appliances ease-of-use, Dunn referenced Mercy Ships, a Texas-based charity that operates the Africa Mercy, the largest non-governmental hospital ship in the world. The ship's staff, from IT to crew to doctors, are all volunteers, and the staff rotates four times per year, which means all new people running the ship -- including the IT.

"Whatever they have on that ship has to be drop-dead easy to operate and easy to learn," he said. "That's why hyper-converged is a very good fit for them -- to make it easy. They're only connected by satellite to the outside world so they're self-contained. They stretch cluster between the stern and the bow, with two data centers, and systems are running all the hospital operations, all the nautical navigation operations, collaboration, group management.... Basically, everything on the ship that needs a computer is running off of VxRail."

You might think that setting up two separate data centers that have to seamlessly work together and run life critical health care workloads would be a laborious process requiring months of back and forth between Dell and Mercy Ships. Not so, according to Dunn.

"It's actually not as hard as you think," he said. "We have different series of VxRail appliances for different kinds of workloads. What Mercy Ships is using is the V series, which are very specifically designed to support virtual desktops efficiently. The way that we do that from a hardware perspective is there are different cooling and power options inside the chassis that will let you put up to three graphical processing units in there for medical imaging and high-end VDI. So it's really a matter of, number one, you know they need GPUs, they're in a V Series, and then number two, if you give us your workload we can pretty easily tell you what you need, or we can actually take telemetry from your existing environment and then recommend a configuration."

Shannon Champion, Dell EMC's director of HCI marketing, was also at the event, and she told ITPro Today that in this capex versus opex tech environment, there are several ways to go about acquiring Dell EMC products such as a VxRail system.

"We still see customers acquiring infrastructure predominately as a capital expenditure," she said. "but with VxRail we also offer different flexible consumption options. We offer Cloud Flex for HCI and VxRail is a part of that, which allows customers to consume it similar to an opex operating model, so they can pay an annual amount that decreases over time. There's only a one-year commitment to payments, then they can send it back if they want. Nobody does that, but that's the offer that we have."

It wasn't surprising that Dell was pushing its edge technology at VMworld because practically all the vendors at the event were on the edge bandwagon. As the newest new frontier in the world of tech, everybody is scrambling for a piece of the edge pie.