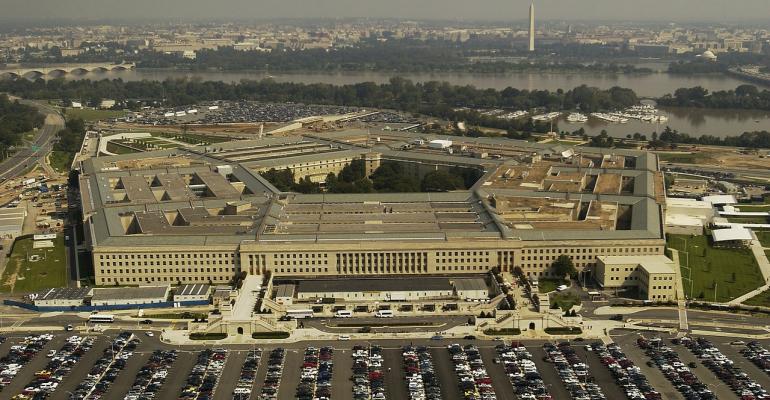 Chief Information Officer Dana Deasy told reporters at the Pentagon that he’s scheduled “education” sessions for new Defense Secretary Mark Esper on the competition that critics, including Trump, have argued is tilted to favor Amazon.com Inc.

(Bloomberg) -- The Pentagon fought back Friday, defending the cloud-computing contract valued at as much as $10 billion that President Donald Trump has questioned and that new Defense Secretary Mark Esper is subjecting to a fresh review.

Chief Information Officer Dana Deasy told reporters at the Pentagon that he’s scheduled “education” sessions for Esper on the competition that critics, including Trump, have argued is tilted to favor Amazon.com Inc.

While Esper, who took office July 23, has requested detailed briefings on the Joint Enterprise Defense Infrastructure program, Deasy said, the competition hasn’t been put on hold. “There is not a ‘pause’ on the overall JEDI program,” he said.

But Deasy acknowledged that the defense secretary’s review will delay the contract award beyond the end of this month, which had been the soonest the Defense Department had said it would happen.

Deasy, whose presentation included a three-page document with combative retorts to criticism of the competition, said Esper supported his plans “to clarify some of the myths that are going on out there.”

Trump stunned tech companies, the Defense Department and lawmakers when he openly questioned whether the pending contract is being competitively bid. “I’m getting tremendous complaints about the contract with the Pentagon and with Amazon,” he told reporters last month. Trump has often attacked Amazon founder Jeff Bezos, who also owns the Washington Post. Microsoft Corp. is the only other bidder that hasn’t’ been eliminated.

Among points in Deasy’s document defending the contract:

Oracle has spearheaded the campaign against the contract, but a federal claims court judge last month rejected its contention that the project was fatally tainted by revolving-door conflicts of interest involving people who worked at times for the Pentagon and Amazon or that the acquisition strategy was improper.

The Defense Department’s inspector general is working on its own report on the conflict of interest questions. Deasy said that if the report isn’t finished by the time Esper completes his review, “we would obviously have a conversation with the IG” before awarding the contract to see if there’s “reason to pause.”