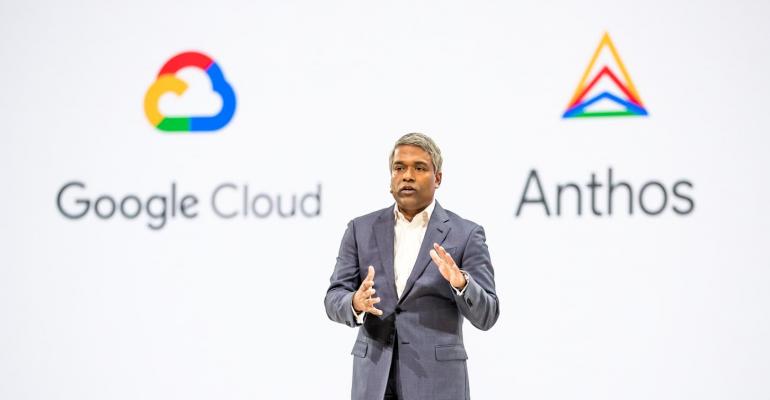 Google Embraces Multi-Cloud Clusters that Can Run Anywhere ... Even AWS

Anthos is an open platform that lets you run an app anywhere, without needing to modify the code, on existing on-premises hardware or in the public cloud.

SAN FRANCISCO -- If there was any doubt that mutli-cloud is the future, an unprecedented move during the keynote at Google Cloud Next on Tuesday should put that doubt to rest. In a demo of Anthos -- formerly known as Cloud Services Platform (CSP) -- Google executives showed how to deploy containers across multi-cloud environments. They even pushed a cluster into Amazon Web Services (AWS) live on-stage.

Google Cloud CEO Thomas Kurian acknowledged the move as unusual, telling the audience that they probably didn’t expect to see Google include a competitive cloud provider in a demo at its annual cloud conference. But the reality is that enterprises, regardless of industry, need consistent experiences as they deploy and monitor workloads across clouds and on-premises.

Based on CSP, which Google announced last year, Anthos is an open platform that lets you run an app anywhere without needing to modify the code, on either existing on-premises hardware or in the public cloud. Anthos is generally available on GCP with GKE, Google's managed Kubernetes service, and on-premises with GKE On-Prem. Google said Anthos frees engineering teams from OS management, and helps increase utilization while reducing cost by bringing legacy apps into a DevOps environment.

“Anthos came from us listening to customers,” Kurian said. He has been at the helm of the company’s cloud arm for the past 10 weeks, in a role previously held by Diane Greene. Though Google has been developing Anthos for the past 8 months since launching CSP in beta, Kurian has already had conversations with hundreds of customers and partners in his short tenure. Customers have told Google that they want to be able to have choice and flexibility to move between clouds, securely, and in a consistent way.

“We were hearing from CIOs over and over again that speed was critical to their business,” Kubernetes head of product Aparna Sinha said. Since Anthos allows developers to write once and deploy anywhere, developers can be more productive, she said.

HSBC has 40,000 engineers, so productivity is critical to its business, especially as it plans to spend $17 million on tech over the next few years, the company’s CTO Dinesh Keswani said.

“We want to be able to transform the world’s banking experience,” Keswani said. “We’re committed to being a hybrid company from day one.”

“When we look across the estate, a lot of our core data is locked up,” he said. “We are trying to democratize the data, and make it available as a service for consumption.” The data is spread across four generations of apps: mainframes, client servers, web apps, and mobile-first cloud apps. Being able to modernize apps through GKE has helped the company surface more of this data.

“Having the flexibility to develop in one place and deploy in many has been a game changer,” he said.

Loblaw, the largest retailer in Canada, has been on a journey of digital transformation, evolving from a traditional retailer to a technology leader, Hesham Fahmy, Loblaw Digital VP of technology said.

In addition to helping free up engineering time, “Anthos has allowed us to deploy at massive scale, really fast,” he said.

“We’re able to patch an application once, and run it anywhere … we no longer deal with the pain of inconsistencies of test environments,” Fahmy said.

He said that talent is Loblaw’s most valuable asset when it comes to digital transformation, and his team is excited about the possibilities with Anthos.

“My Slack is going crazy with my team saying we’ve bet on the right horse here,” he said.

“Anthos removes risk and gives you choice,” Chen Goldberg, engineering director at Google said. “Most tools are not built with user choice in mind.”

Anthos gives users the ability to run and monitor multiple clusters, running in multiple clouds and on-premises from their GCP dashboard. Anthos can be integrated with existing identity stores and the environment is kept secure with automated patching, Goldberg said.

The easiest way for enterprises to get on board with Anthos is through Anthos Migrate, she said. Anthos Migrate, which is currently in beta, auto-migrates VMs from on-premises or other clouds directly in GKE. During a demo, Goldberg and Sinha were able to migrate an on-premise VM to GKE in less than 10 minutes.