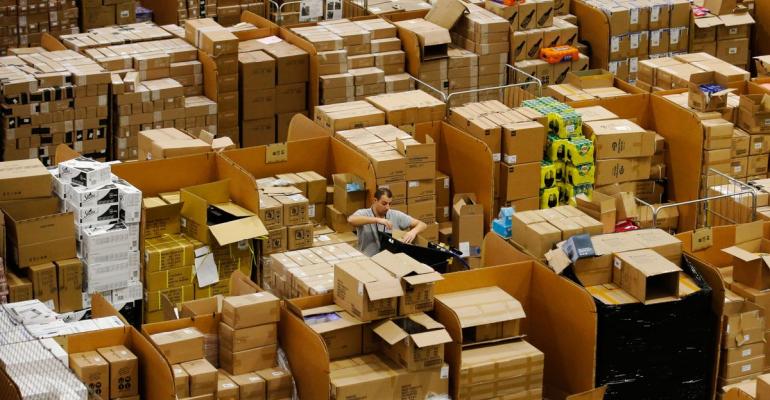 Amazon has historically delivered relatively little profit as it fulfills Bezos’s strategy of investing to stay ahead. Building warehouses and data centers around the world, inventing new devices and automating tasks usually done by humans are just some of the places Amazon spends its money.

Advertising was a key moneymaker, highlighting Amazon’s ability to charge brands and merchants for visibility to its 100 million-plus loyal Prime subscribers, who pay fees in exchange for delivery discounts, movie and music streaming and other perks. Overall revenue rose 20 percent, and the company’s "other" revenue category, which is mostly advertising, grew 95 percent to $3.39 billion in the quarter.

Shoppers will spend $484 billion globally on Amazon this year, up 26 percent from 2018, and the Seattle-based company will capture more than half of all online spending in the U.S., according to EMarketer Inc. Chief Executive Officer Jeff Bezos has been pushing beyond the low-margin business of selling goods online into more profitable categories like cloud computing and advertising. Those profits also help fuel Amazon’s growing devices business, which includes smart-home and connected-car gadgets that operate on Amazon’s voice-activated Alexa platform.

Strength in online sales over the holiday period showed Amazon still has room to grow in its core business and is benefiting from excitement around its new devices, said Ron Josey, an analyst at JMP Securities.

"This company continues to take wallet share and operate very well," he said.

Revenue was $72.4 billion in the fourth quarter, the e-commerce giant said Thursday in a statement. Analysts projected $71.9 billion. Net income was $6.04 per share, compared with an average estimate of $5.56. Sales at Amazon Web Services, the top seller of cloud-computing services, climbed 45 percent to $7.43 billion. Operating expenses grew 18 percent in the recent quarter.

Sales will be $56 billion to $60 billion in the current period, compared with analysts’ average estimate of $61 billion. First-quarter operating income will be $2.3 billion to $3.3 billion, in line with analysts’ estimates of $2.99 billion. Shares fluctuated between gains and losses in extended trading after the report and were little changed at 5:19 p.m. in New York.

Losses from international operations widened to $642 million, reversing a trend of narrower losses internationally. The potentially weak revenue outlook highlighted concerns about how Amazon will do in India, its biggest international expansion target, where rules on foreign-owned e-commerce companies are changing. On a call with reporters, finance chief Brian Olsavsky also said headwinds from foreign currency exchange rates are curbing revenue in the current period.

Investor excitement about Amazon’s growing profits helped push the stock to a record high in September, before the shares dipped during a broader market slump at year’s end. Amazon shares are up about 14 percent this year on investor optimism that the company can maintain growth and profitability, and closed at $1,718.73 before the results were released. Amazon had jumped back above Microsoft Corp., which is No. 2 in cloud computing, as the most valuable publicly traded company, with a market capitalization of $840.4 billion.

A tight labor market, rising shipping costs and money-losing investments abroad remain threats. Amazon in October pledged to pay all of its warehouse employees at least $15 an hour, while eliminating some bonuses and stock awards. The cost of stowing, packing and delivering goods increased 12 percent in the holiday quarter to $10 billion, in line with online sales growth of 12.5 percent.

The fourth quarter offered investors the first glimpse of year-over-year results since Amazon’s $13.7 billion acquisition of Whole Foods Market in 2017. Sales in physical stores, which are predominantly Whole Foods locations, decreased 2.7 percent to $4.4 billion. In-store pickups of online grocery orders don’t count as physical store sales, further clouding the ability to track the performance of Amazon’s grocery push. The online retailer’s brick-and-mortar strategy also includes bookstores and a cashierless convenience store called AmazonGo, which lets customers check in with a smartphone app and be charged automatically based on what they remove from the store.

Amazon has historically delivered relatively little profit as it fulfills Bezos’s strategy of investing to stay ahead. Building warehouses and data centers around the world, inventing new devices and automating tasks usually done by humans are just some of the places Amazon spends its money.

Bezos, the world’s wealthiest man and Amazon’s biggest shareholder, announced earlier this month that he was divorcing MacKenzie, his wife of 25 years.

Microsoft Azure Adds Another VMware Option to the Multi-Cloud Mix
May 06, 2020