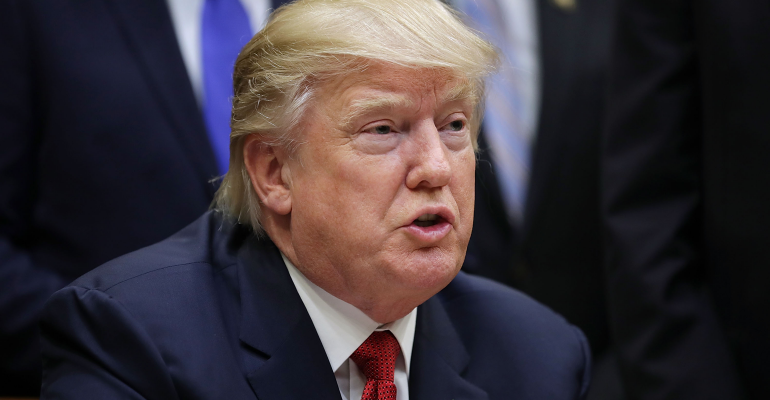 The well-coordinated lobbying effort -- including a flurry of phone calls, letters and personal appeals from influential senators in the last few weeks -- shows the power of rivals who are long-term government contractors and have won favor with the White House.

(Bloomberg) -- Following a crucial court victory in mid-July, Amazon.com Inc. seemed poised to clinch a lucrative Pentagon cloud-services contract, having beaten out several rivals and steered past the animus of a powerful foe, President Donald Trump.

Just one week later, Trump stunned tech companies, the Defense Department and lawmakers when he openly questioned whether the $10 billion contract had been competitively bid. He said he had heard complaints from companies such as Microsoft Corp., the No. 2 contender, and Oracle Corp., which was eliminated from the competition earlier this year. Both have argued that the terms favored Amazon, whose founder, Jeff Bezos, is one of the president’s longtime nemeses.

Amazon’s sudden fall from grace shows how quickly fortunes can change in Washington. But Trump’s unexpected criticism was the culmination of more than a year of behind-the-scenes maneuvering to unseat Amazon. The well-coordinated lobbying effort -- including a flurry of phone calls, letters and personal appeals from influential senators in the last few weeks -- shows the power of rivals who are long-term government contractors and have won favor with the White House.

Trump may not step in ultimately. But the possibility of White House intervention raises the fear that more than $400 billion in government procurement, which agencies and courts for decades have sought to shield from outside influence, could be politicized.

At stake not only is a rich revenue stream from the Pentagon project. The deal could also open the door to other, highly profitable federal cloud contracts. The losers could see billions of dollars in existing business melt away if they fall further behind industry-leader Amazon in the cloud market.

Amazon increasingly relies on its cloud business for revenue growth. On Thursday, the company reported second-quarter profit at $5.22 a share, below analysts’ average forecast of $5.56 a share. Sales increased 20% to $63.4 billion.

More than a year before Trump weighed in publicly, the White House asked Pentagon officials to justify their decision to give the contract to a single company instead of spreading it across multiple vendors, according to a person familiar with the matter. That forced the project’s overseers to defend their winner-take-all approach in a document for the White House, the person said. The Pentagon has said multiple vendors would slow down the award while also making it harder to keep its data secure.

It was around that time that Safra Catz, the co-head of Oracle, dined at the White House with Trump and venture capitalist Peter Thiel, who advises Trump on technology matters. Even though the final bid solicitation wasn’t yet out, the possibility that Amazon alone might win the contract came up in the April 3, 2018 dinner discussion, sources familiar with the matter said. Oracle declined to comment for this story.

Amazon was seen as the front-runner from the start because it had already won a $600 million cloud contract from the Central Intelligence Agency in 2013, showing it can manage sensitive government data. When the Pentagon announced its decision in July 2018 to opt for a single winner, it dealt a blow to Microsoft, IBM, Dell and Oracle, who had coordinated a lobbying campaign to stop the Seattle-based giant, Bloomberg reported. The companies wouldn’t comment or didn’t respond to requests for comment.

The project, which had been championed by former Defense Secretary Jim Mattis, was never supposed to be this controversial. The goal is to bring the Pentagon’s technology into the modern era. By investing in commercial cloud services, which host computing power and storage in remote data centers, the military could secure sensitive databases, embrace machine learning and artificial intelligence, and speed up real-time sharing of information among war-fighters. Its formal name, Joint Enterprise Defense Infrastructure, or JEDI, is intended to evoke “Star Wars” imagery.

Within a year of the Pentagon announcement, many of the officials who backed the sole-source approach, such as Mattis, former Acting Secretary of Defense Patrick Shanahan, and Chris Lynch, the Pentagon’s technology guru, left the government -- leaving Amazon exposed.

Attacks on Amazon escalated in late spring 2019. They included a sharply critical Fox News segment on June 14 by Tucker Carlson, widely recognized as one of Trump’s favorite commentators. After seeing the segment, the White House requested a Pentagon briefing, a person familiar with the matter said. The Defense Department prepared a detailed document pushing back on the Fox program in preparation for the briefing. The White House didn’t respond to requests for comment.

The Fox host questioned whether the bid had been unfairly skewed to favor Amazon. While Fox flashed pictures of Bezos on the screen, Carlson and Representative Mark Meadows, a North Carolina Republican, mulled whether the Pentagon was being too secretive about its dealings with the company and whether Amazon could be trusted with sensitive data. Carlson didn’t respond to a request for comment.

The e-commerce giant, however, seemed to have solidified its chances when Oracle, its most determined opponent, lost a legal challenge in the U.S. Court of Federal Claims on July 12, clearing the way for the contract to go to Amazon or Microsoft, the only companies still in the running.

But the court loss may have triggered a new chain of events. That day, two Republican senators put on a full-court press to get Trump to intervene.

Wisconsin’s Ron Johnson, while on a well-timed flight to his home state on Air Force One with the president, said that he and others had written letters complaining that the contract terms froze out Oracle and other companies. Trump expressed frustration and asked aides to show him the correspondence, Bloomberg reported.

The same day, Florida’s Marco Rubio questioned the fairness of the procurement in a phone call with Trump. A person familiar with the call said it sounded as if Trump was thinking about canceling the contract.

Rubio had written the day before to Trump’s national security adviser, John Bolton, arguing in favor of multiple cloud vendors to ensure “continuing price competition and access to the latest innovations.”

Amazon’s PAC gave the senators money, too -- $12,500 to Rubio and $10,500 to Johnson in the same period. Spokespersons for Johnson and Rubio said the senators declined to comment.

Before his confirmation on Tuesday as the new Defense Department secretary, Mark Esper agreed to a request from Senator Jeanne Shaheen, a New Hampshire Democrat, to consult the Pentagon’s inspector general before making the award. A Shaheen spokesperson said Oracle has a large presence in the state.

Shaheen was referring to a pending ethics review of alleged conflicts by Pentagon personnel, which could include Amazon’s hiring back of a former employee, Deap Ubhi. He left Amazon in 2017 for a job at the Pentagon, where he worked on the cloud contract.

He later recused himself because, he told Pentagon officials, he was speaking to Amazon about selling it a company he had started. Oracle’s lawsuit said that was an “elaborate lie” to camouflage that he was actually speaking to Amazon about a job. A spokesperson said the inspector general is aware of the allegations concerning the JEDI cloud broadly and is reviewing them. Amazon, where Ubhi continues to work, said he wouldn’t comment.

“Independent reviews by the GAO, along with the U.S. Court of Federal Claims’ ruling, have confirmed the department followed all necessary laws and regulations,” said Elissa Smith, a Pentagon spokeswoman. Nevertheless, Esper on Wednesday said he’d heard “from everybody” about the JEDI contract and “that’s one of the things I want to take a hard look at.” Twelve Republican House members are among those who’ve asked Trump to delay awarding the contract in recent days, citing conflicts of interest.

Trump has long denounced Bezos in tweets, criticizing him for the rates his company pays the U.S. Postal Service to deliver Amazon packages and his ownership of what Trump calls “the Amazon Washington Post.”

The president at times openly derides Bezos, tweeting a link Monday night to another Fox News segment that referred to the cloud deal as the “Bezos bailout.” And on Wednesday, his Treasury secretary, Steven Mnuchin, said Amazon “destroyed the retail industry” in the U.S.

Government experts question if the president’s involvement is motivated by a personal grudge. “What other reason would he have to weigh in other than he doesn’t like Jeff Bezos?” asked Steven Kelman, professor of public management at the Harvard Kennedy School. Kelman said he has received funding for unrelated research from IBM’s research arm; IBM is no longer under consideration for the Pentagon project.

Amazon has been hitting back and in June its cloud-computing unit hired lobbyist Jeff Miller, a longtime Trump supporter who has raised more than $1 million for the president’s 2020 re-election. A filing shows Miller was paid $20,000 to lobby the office of Vice President Mike Pence, possibly in an attempt to enlist him in the effort to save the JEDI program. Amazon wouldn’t comment for this story. Pence and Miller didn’t respond to requests for comment.

Now the risk for Amazon is whether Trump might ask Esper to start from scratch. Under U.S. procurement laws, Trump can’t pick winners and losers without inviting a lawsuit. And even though the courts have decided that the Pentagon’s bidding process was fair, Amazon’s foes have Trump’s ear.