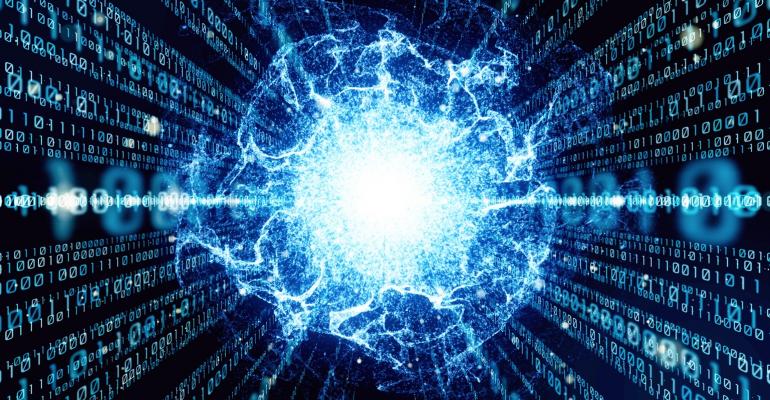 Quantum computing at the edge offers immense compute capabilities for Internet of Things devices, particularly at the edge. But make no mistake: quantum is still in transition.

The future of edge computing and the Internet of Things (IoT) may be shaped in part by what happens now at the edge of the atmosphere.

In late 2019, an “ultra-precise quantum sensor” was delivered to the International Space Station as part of a core subsystem for the Jet Propulsion Laboratory’s Cold Atom Laboratory (CAL).

In January 2021, Chinese scientists said they had created the “first integrated quantum communication network” that combined optical fibers on the ground with two ground-to-satellite links to achieve quantum key distribution over a total distance of 4,600 kilometers.

The quantum sensor used to measure gravity at the space station was the second ISS payload developed by NASA with ColdQuanta, one of many ventures that aim to commercialize the intriguing and often confounding world of quantum computing and quantum information systems. The company believes that, in addition to powering computers, quantum technology will encompass sensors, positioning and navigation systems, and signal processing.

“Out on the edge where sensors are today, there will soon be atomic accelerometers and other devices,” ColdQuanta President and CEO Robert “Bo” Ewald said in a recent interview. Possible applications, he added, include a quantum positioning system for automobiles or aircraft that provides standalone navigation capabilities without the need for global positioning satellite (GPS) systems that are believed vulnerable to hacking, jamming and spoofing.

“There is concern that the GPS system could get knocked out with a denial-of-service attack, but the Quantum Positioning System would be spook-proof,” Ewald said. Quantum radio frequency sensors, he added, would be able to pick up signals that are 100to 1,000 times weaker than conventional systems.

Unlike digital bits that represent information in a state of either a 1 or a 0 numeral, quantum bits (qubits) the 1 and 0 can be in superposition of any combination of both 1 and 0 simultaneously, allowing for exponentially faster computation. But a fundamental aspect of quantum effects is that you can’t measure or copy the particles used in quantum systems without changing their quantum state.

“Once you read a qubit you collapse its state so you can’t copy the qubit or save it or replace it,” explained Bob Sorensen, senior vice president with high-performance computing industry analyst firm Hyperion Research. “There is 100% assurance that nobody else is reading the information, no one saw it and more importantly nobody changed it.”

With quantum key distribution, any attempts to intercept encrypted communication will change the nature of the photons being transmitted, so the encryption key becomes unusable and is discarded, making it possible to decrypt the information.

The Chinese network is one of many efforts underway around the globe that may ultimately create an unconditionally super-secure, super-fast, quantum internet and non-corruptible 5G communications. In essence, users of a quantum internet can communicate over a shared network with the security of a dedicated network.

“When fully deployed, the quantum Internet will connect any two points (eventually on the planet) via quantum communications through a system of national quantum networks,” predicted a report from a February 2020 Quantum Internet Blueprint workshop hosted by the U.S. Department of Energy

“Each quantum network will interconnect nodes based on a heterogeneous set of technologies that will enable the realization of a diverse set of quantum protocols, such as multi-party secure communications, sensing, blind quantum computing, and distributed quantum computing.”

One projected milestone of the Blueprint is for inter-campus and inter-city entanglement distribution networks for which small-scale sensor networks would be an immediate application.

Entanglement is a quantum effect that Albert Einstein supposedly derided as “spooky action at a distance.” It describes a phenomenon in which a pair or group of quantum particles such as atoms or photons are inextricably linked so that when separate, theoretically at any distance, they share a common state.

Because of entanglement, information in a qubit at one point of a network can be shared—or teleported—in a disembodied nature to another point on the network. Fermilab, the U.S. national laboratory, in 2020 demonstrated the teleportation of qubits over a 44-kilometer fiberoptic network.

Applying quantum effects to communications and computation has many obstacles to be resolved before quantum computing is commercially viable. Quantum computers can be “crippled by errors in the form of noise, faults and loss of quantum coherence … caused by vibrations, temperature fluctuations, electromagnetic waves and other interactions with the outside environment,” wrote Scott Pakin and Patrick Coles of Los Alamos Laboratories.

That’s why some refer to this as the era of noisy quantum computing. “A lot of people are fitting their current hopes into finding use cases for this noisy intermediate stage of quantum systems,” said Hyperion’s Sorensen. “You have to run multiple shots. That’s basically, if I want an answer, I have to run the same program 8,000 times and I get this wonderful histogram of solutions.

Miniaturizing quantum computing systems is essential for commercial exploitation at the edge. The most mature systems utilize superconducting semiconductor technology that requires bulky refrigeration systems that can achieve the supercooling needed for their operations. ColdQuanta is developing systems that use lasers to supercool atoms in an approach it says could conceivably provide thousands of qubits in a small footprint of less than 1 square meter.

IonQ, another developer, also uses laser-based cooling for its trapped ion quantum technology and says it plans to deploy rack-mounted modular quantum computing systems by the end of 2023 and has suggested that desktop-sized devices are possible by 2025.

Matthew Keesan, IonQ’s vice president of product development, said that the first version of the company’s vacuum chamber in which computation takes place was about the size of a soccer ball; today it’s the size of a deck of cards, . The company’s roadmap envisions it will be miniaturized to the size of a postage stamp. “Some of the most interesting edge applications of the future will be enabled by integrating quantum sensing with quantum computers,” he said.

Oak Ridge National Laboratory research scientists Ali Passian and Neena Imam recently published a comprehensive survey report concluding that successful development of edge computing will rely on next-generation nanosystems, which are conducive to quantum effects. “Nanotechnology is definitely quantum,” Passian said in an interview. “To fully take advantage of nanosystems and develop devices based on nanotechnology and develop useful operations you need to employ quantum mechanics.”

Both Passian and Imam said they are optimistic about the prospects of quantum sensors and edge computers, but that the technology is not ready for prime time. “There is a lot of interest, a lot of research going on and a lot of investment,” Imam said, adding that the challenge is “how do we actually connect all of these different pieces together?”

Realizing the potential of quantum technology at the edge and in IoT devices may take years to play out or may happen sooner as scientists and developers build on each other’s advances. The pace is quickening, with venture capital firms in 2020 more than doubling the money invested in quantum computing companies in 2020 compared to previous years and the U.S. government committing $625 million to a multi-year initiative. At some point, said Ewald, the effort will pay off with exponential performance improvement in computing, and “the same thing will happen with quantum sensors – they will be 100 times to 1,000 times more accurate than digital.”