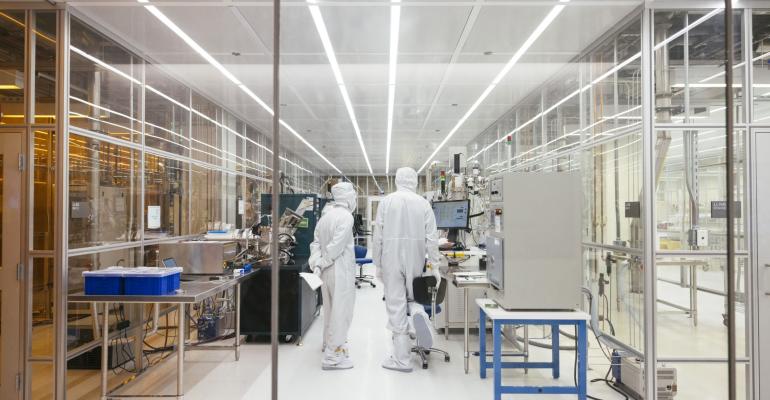 The bet on quantum is still some years away, but could fuel economic growth as manufacturing continues to decline.

(Bloomberg) -- Chicago is betting on quantum -- a technology that could ensure everything from emails to online shopping is 100% secure -- to fuel future economic growth. But there’s still much work to do before the city realizes its dream of becoming the nation’s capital for the promising technology.

Best known for traditional industries including food, agriculture and manufacturing, the Windy City has been trying to lure investments from companies such as Google Inc. and Amazon.com as it shifts its focus to quantum, which promises to make Internet communication unhackable.

Illinois already gets 40% of all the federal dollars for the technology and has four of the nation’s 10 quantum centers, the most of any state. But being at the forefront of quantum developments requires the city to focus on translating science into companies and jobs, said Brad Henderson, chief executive officer at P33, a non-profit founded by former Secretary of Commerce Penny Pritzker.

“We have a top five science setting and we’re not even in the top 10 at translating science into commerce,” he said. “We’re targeting tens of billions of dollars in annual GDP that we expect to have in 10 years. That’s our goal. And tens of billion dollars actually translates into thousands of jobs.”

Last week, scientists from the University of Chicago carried out the first test of the quantum network with the general public in the US, an event that came with a surprise visit from former President Barack Obama.

Chicago has been trying to prop up its beleaguered finances, with the city paying required contributions to all its severely underfunded pensions for the first time ever in 2022. The bet on quantum is still some years away, but could fuel economic growth as manufacturing continues to decline.

The idea that properties of quantum mechanics could be harnessed to make a new kind of computer was first touted by Nobel Prize-winning physicist Richard Feynman in the 1980s. Unlike conventional computers, which interpret data in “ones” and “zeros,” quantum machines can store information in multiple forms -- ones, zeros, both, or something in between.

That ability allows a quantum system to multitask in ways today’s binary equipment cannot, rapidly decreasing processing times. But while computers with those capabilities are still about a decade away from widespread commercial application, quantum communications could become available much earlier, according to consultants McKinsey & Co.

That’s where Chicago excels. The third-biggest US city already has the country’s longest quantum network -- 124 miles (200 kilometers) connecting the US Department of Energy’s Argonne National Laboratory in the outskirts to the University of Chicago and the Chicago Quantum Exchange, a hub for advancing quantum technology.

“There is this misconception that quantum is only on the West Coast or the East Coast,” said Marco Pistoia, head of global technology applied research at JPMorgan Chase & Co., which joined the Chicago Quantum Exchange as a partner in 2020. “In reality, Chicago is a big center for quantum.”

The finance industry, another stalwart of Chicago, will be one of the biggest beneficiaries. Quantum computing will help algorithms sort large amounts of data and solve complex mathematical problems that would take traditional machines days, months and even years.

Long before, quantum communications will solve a more basic problem: How do you ensure no one can clone your 16-digit credit card number when you buy something online? Or get hold of your email and social media passwords?

Quantum communications guarantee that any message intercepted gets destroyed, said David Awschalom, vice dean for research at the Pritzker School for Molecular Engineering at the University of Chicago, and founding director of the Chicago Quantum Exchange. So not only will a hacker be unable to get the information, but the parties of the attempted hack will also know someone tried to intercept it.

The technology could also be used to make elections more secure. Switzerland has used the so-called quantum-key distribution to protect its local elections. It’s this technology that students from Chicago’s Kenwood Academy High School tested last week in a vote on the question: Should social media companies be allowed to censor information/misinformation?

“Knowledge is power,” Obama told the students. “If you know how to sort out good information from bad information, you will have more power to make good decisions that take you where you want to go.”

Keomi Brame, 16, said she had heard a few things about quantum, but after the mock vote, she now would consider it as a potential career path.

“After today, I understand why it’s so important,” she said. “It can make processes around the world much easier, especially when it comes to security because it makes it harder for people to hack.”

Another challenge for Chicago is that the largest employers -- IBM, Amazon and Google -- are still on the coasts. Venture capital is also concentrated in computing, while Illinois’s biggest competitive advantage is in materials, sensors and the quantum network. Still, the city has attracted quantum hardware company EeroQ Corp.

“Chicago is just a one of those places where people have gathered enough resources, recruited a lot of talent to push quantum science forward,” said Jun Ye, a professor at the University of Colorado Boulder. But there’s also Colorado, California and Cambridge, where Harvard and the Massachusetts Institute of Technology are doing a “huge amount” of quantum work, he said.

Quantum technology is also a source of geopolitical tension. The Biden administration is exploring the possibility of new export controls that would limit China’s access to some the most powerful emerging computer technologies, including quantum, Bloomberg reported last week.

Illinois Governor JB Pritzker, who is seeking re-election next month, has already committed $200 million for quantum, but more will be needed. The city and the state will also need to avoid errors of the past and focus on attracting companies, startups and building a quantum industry, said Henderson of P33, whose non-profit was founded by the governor’s sister.

To help achieve that, P33 created the Quantum Cohort to bring research and industry together. It also helped start Chicago-based Duality, the nation’s first accelerator program dedicated exclusively to supporting early-stage quantum firms, which counted Amazon.com as its first investor.

“We believe Chicago can be the Quantum Valley of the United States, there’s no reason it can’t,” Awschalom said. “Every federal agency, everyone is funding programs here.”