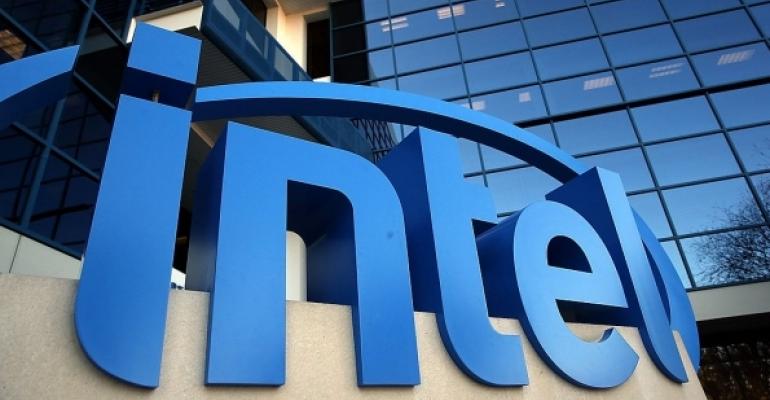 Intel’s forecast signals that major server customers need the company more than ever to expand their ability to store, transmit and process the massive amounts of data that their customers generate and demand.

(Bloomberg) --Intel Corp. said 2018 is looking better than expected thanks to strong demand for the chips that power cloud computing, showing that the company is holding steady against competitors that are trying to break its stranglehold on that lucrative market.

Growth in the data center group has become one of the key indicators of Intel’s overall performance, and investors are focused on whether that unit can maintain the double-digit revenue-expansion rate executives have promised. Intel gave them what they were looking for in the first quarter, with revenue in that group up 24 percent. Based on a strong start to the year, Intel raised its full-year forecast by $2.5 billion, and sales in the first quarter also came in higher than analysts were expecting.

“For the data center group, the trends we saw in the first quarter we expect to continue into the second quarter,” Chief Financial Officer Bob Swan said. “The strength was across the board. Cloud was obviously the strongest, up 45 percent, but communications in a relatively benign capital-spending environment was up 33 percent.”

The shares, which have outperformed other industry stocks this year, jumped as much as 8.9 percent in extended trading following the announcement. They closed at $53.05 in New York, leaving them up 15 percent this year before the results were released.

Under Chief Executive Officer Brian Krzanich, Intel is increasingly touting its efforts beyond personal-computer processors, a business that’s long provided the company with the majority of income. The drive to lessen its reliance on an industry that hasn’t expanded for six years has been bolstered by massive spending on the servers that are the basic component of the data centers that run the Internet. Alphabet Inc.’s Google and its competitors continue to pour money into those machines, benefiting Intel, which controls more than 99 percent of the market for chips that run them.

Sales in the current period will be $16.3 billion, the Santa Clara, California-based company said in a statement Thursday. That compares with an average analyst estimate of $15.6 billion. Earnings per share will be 85 cents. Intel now sees 2018 revenue of $67.5 billion.

Intel’s forecast signals that major server customers need the company more than ever to expand their ability to store, transmit and process the massive amounts of data that their customers generate and demand.

“I think the spending environment overall is stronger,” said Romit Shah, an analyst at Instinet LLC. While the PC market is no longer growing, its precipitous decline is over, helping Intel’s biggest market by volume of chips sold. “PC is in a good place. It’s bottomed. It’s stable.”

Rival Advanced Micro Devices Inc., which Intel had relegated to less than 1 percent of the market for server processors, debuted a new design for that market last year that AMD says makes it competitive for the first time in years. AMD on Wednesday said that owners of large data centers are showing more interest in its Epyc server product, sending sales up by more than 10 percent in the first quarter. The company also predicted a surge in revenue in the current quarter.

While AMD produces chips that are broadly the same design as those from Intel, other threats are less direct. Nvidia Corp. sells graphics chips for data centers that are adapted for artificial intelligence processing work, a business that is on course to generate more than $2 billion in annual revenue. Customers such as Google have create their own chips that do portions of the computing previously done by Intel’s Xeon server processors. Intel has tried to counter that diversification by acquiring makers of other types of chips and building them into its offerings. That hasn’t yet unhitched its fortunes from its main product, the chip technology known as x86.

In the first quarter, sales climbed 9 percent to $16.1 billion, Intel said. Profit was $4.5 billion, or 93 cents a share, compared with $3 billion, or 61 cents, in the same period a year earlier. Analysts on average were projecting adjusted profit of 71 cents on sales of $15.1 billion.

Intel’s PC chip unit had first-quarter sales of $8.2 billion, up 3 percent from a year earlier. The data-center unit had revenue of $5.2 billion, up 24 percent.

Sales of memory chips rose 20 percent, while revenue from chips for a new range of devices that are gaining the ability to compute and connect, known as the internet of things, climbed 17 percent.

Its memory unit competes with Samsung Electronics Co., the only company in the industry that can rival Intel for resources and last year surpassed it in overall chip revenue for the first time, ending the U.S. company’s 25-year run as the No. 1 chipmaker. Samsung reported a large jump in sales and revenue at its chip unit, buoyed by strong demand for memory, particularly for use in servers.

Intel said it expects to spend more this year on improving production. It’s now aiming to invest $14.5 billion on new plants and equipment, $500 million more than it said it was budgeting for 3 months ago.