/sites/all/themes/penton_subtheme_itprotoday/images/logos/footer.png
Recent
Recent
How to Leverage DevOps Processes for Digital Transformation
Aug 02, 2021
All Hard Disk Drives Aren't Created Equally: How to Choose?
Jul 30, 2021
Culture, Not Tech, Is Key to Getting Most Out of DevOps Practices
Jul 30, 2021
Digital Transformation Definition — From an IT Pro’s Perspective
Jul 30, 2021
Windows 11 #BetaChannel Build Tracker
Jul 29, 2021
Featured
IT Pro Salary Survey: What You Earned in 2020
Jul 09, 2021
Cloud Cost Optimization: Best Practices for IT Pros
Jul 15, 2021
PowerShell 101: A Technical Explainer for IT Pros
Jul 14, 2021
Edge Computing in the Enterprise Report
May 28, 2021
Interop Digital
brought to you by
News 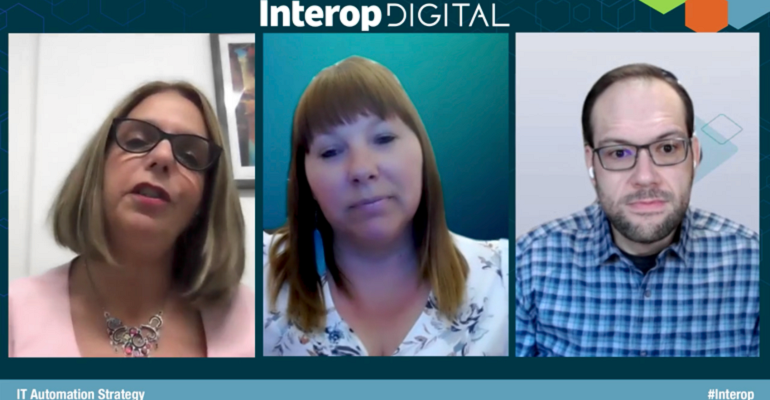 At the Interop Digital IT Automation virtual event, a panel of experts provides insight into where automation can work and where it doesn't to accelerate DevOps.

What is the role of automation in helping enable DevOps and, more broadly, digital transformation? That's a question that was discussed in detail during a panel on June 15 at the Interop Digital IT Automation virtual event.

"We know the last 18 months have certainly accelerated the need to have a digital environment, and you can't do all or any of that really without automation," commented panel moderator Jayne Groll (pictured, left), who serves as the CEO of the DevOps Institute.

Automation, however, needs to be defined, according to panelist Cheryl Razzell (pictured, center), vice president of engineering at Polystream. "DevOps" means different things to different people, and "automation" is a loaded word, she said.

"There's so much context to automation. … First of all, you need to identify what you want to automate and what you're trying to do," Razzell said. "It's about people, it's about process, it's about buy-in as well, because automation doesn't always work for everything."

The Cornerstone of DevOps Automation Is Trust

While people, process and technology are core to DevOps, for Glenn Sullivan (pictured, right), principal product manager at Infoblox, the key to DevOps automation is trust.

"I like to focus on one word, and that's trust because what we have right now in a lot of environments is a culture of fear," Sullivan said.

That culture of fear is the anxiety that DevOps professionals have that if they make a change in a production environment and there is an outage, they will lose their job. Having trust in both people and tools to work properly is a critical foundation for any organization as part of DevOps automation, according to Sullivan.

"If you build automation tools, you have to trust that they're going to work, and the only way you do that is to get people to use them, see that they work and then build on that," he said.

From a technology perspective with automation tooling, Sullivan also noted that there is a need for what he referred to as a single source of truth. That source of truth will be the authoritative source for automation and data configuration so the organization will know what to trust.

Defining the Value of DevOps Automation

Automation brings value both to developers and the organizations they work for.

Razzell said she has worked with plenty of teams that have been skeptical about automation. Ultimately though, automating development activities done in deployments exposes IT professionals to new tools and often helps improve collaboration with other teams within the organization, she said.

For Sullivan, automation has been key to building credibility with the site reliability engineers (SREs) and server professionals he has worked with. Automation tooling helps provide a common abstraction layer across different types of responsibilities.

For example, using the Ansible or Puppet configuration management tools that help drive DevOps automation, there was a common language for communicating across teams, he said.

How to Get Started with DevOps Automation

"Start with your end goal and then work backward from that, and also take evaluation of where you are today," she said. "Everyone always thinks you have to throw away what you've already done and start afresh with the digital transformation when actually there's so much reusable material in organizations that can help you in your journey."

Automation is not an-all-or-nothing proposition. There is less need to automate less commonly used processes that perhaps run once every few months, according to Razzell. In her view, organizations should start with automating the everyday, more common processes to get the most value.

It's a suggestion that was echoed by Sullivan.

"Focus on the things that you're changing the most because remember human error causes more outages than anything else," Sullivan said.

Culture, Not Tech, Is Key to Getting Most Out of DevOps Practices
Jul 30, 2021