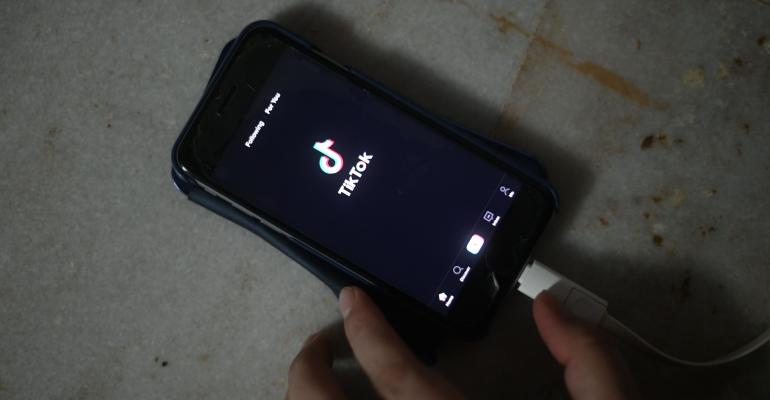 Microsoft Is Said to Be in Talks to Buy TikTok in U.S.

Microsoft Corp. is exploring an acquisition of TikTok’s operations in the U.S., according to a person familiar with the matter. A deal would give the software company a popular social-media site.

(Bloomberg) -- Microsoft Corp. is exploring an acquisition of TikTok’s operations in the U.S., according to a person familiar with the matter. A deal would give the software company a popular social-media site and relieve U.S. government pressure on the Chinese owner of the video-sharing app.

The Trump administration has been weighing whether to direct China-based ByteDance Ltd. to divest its stake in TikTok’s U.S. operations, according to several people familiar with the matter. The U.S. has been investigating potential national security risks due to the Chinese company’s control of the app.

While the administration was prepared to announce an order as soon as on Friday, according to three people familiar with the matter, another person said later that the decision was on hold, pending further review by President Donald Trump. All of the people spoke on condition of anonymity because the deliberations are private.

Microsoft is in talks to purchase TikTok’s U.S. operations, according to the person who asked not to be identified because the discussions are private. Spokespeople for Microsoft and TikTok declined to comment. The software company’s interest in the app was reported earlier by Fox Business News.

Any transaction will face many regulatory hurdles. In recent years, the Committee on Foreign Investment in the U.S., which investigates overseas acquisitions of U.S. businesses, has taken a much more aggressive role in reviewing and approving deals that may threaten national security.

A purchase of TikTok would represent a huge coup for Microsoft, which would gain a popular consumer app that has won over young people with a steady diet of dance videos, lip-syncing clips and viral memes. Microsoft has dabbled in social-media investments in the past, but has never developed a popular service of its own in this lucrative sector.

TikTok has repeatedly rejected accusations that it feeds user data to China or is beholden to Beijing, even though ByteDance is based there. TikTok now has a U.S.-based chief executive officer and ByteDance has considered making other organizational changes to satisfy U.S. authorities.

“Hundreds of millions of people come to TikTok for entertainment and connection, including our community of creators and artists who are building livelihoods from the platform,” a TikTok spokeswoman said Friday. “We’re motivated by their passion and creativity, and committed to protecting their privacy and safety as we continue working to bring joy to families and meaningful careers to those who create on our platform.”

ByteDance bought Musical.ly Inc. in 2017 and merged it with TikTok, creating a social-media hit in the U.S -- the first Chinese app to make such inroads.

As TikTok became more popular, U.S. officials grew concerned about the potential for the Chinese government to use the app to gain data on U.S. citizens. CIFUS, which investigates overseas acquisitions of U.S. businesses, began a review in 2019 of ByteDance’s purchase of Musical.ly.

On Thursday, U.S. Senators Josh Hawley, a Missouri Republican, and Richard Blumenthal, a Connecticut Democrat, wrote the Justice Department asking for an investigation of whether TikTok has violated the constitutional rights of Americans by sharing private information with the Chinese government.

A deal with Microsoft could potentially help extract ByteDance from the political war between the U.S. and China.

Why It’s Time to Revisit Your Microsoft Secure Score
Oct 26, 2020