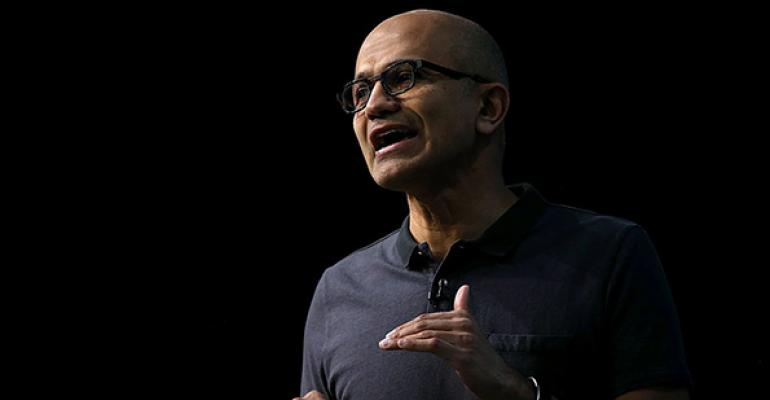 Microsoft CEO's Take on Tech's Clout: `Big by Itself Is Not Bad’

“Unilateral action by individual companies in democracies like ours is just not long-term stable—we do need to be able to have a framework of laws and norms,” Satya Nadella said.

(Bloomberg) -- Microsoft Corp. Chief Executive Officer Satya Nadella said social-media services like Facebook, Twitter and YouTube need clearer laws and rules to govern whether controversial accounts, like former U.S. President Donald Trump’s, have a place on their services, rather than being asked to make free-speech decisions themselves.

“Unilateral action by individual companies in democracies like ours is just not long-term stable—we do need to be able to have a framework of laws and norms,” Nadella said in a wide-ranging interview with Bloomberg Television’s Emily Chang. “Depending on any one individual CEO in any one of these companies to make calls that are going to really help us maintain something as sacred and as important as our democracy in the long run is just no way that at least I, as a citizen, would advocate for.”

Microsoft doesn’t currently run a consumer social media service, but it is among cloud-computing providers that have been pulled into the debate over the deplatforming of certain individual voices, social-media accounts and entire apps, especially following the violent pro-Trump riot at the U.S. Capitol last month. Amazon.com Inc.’s cloud unit pulled its hosting services from Parler LLC, a social network that touts itself as anti-censorship and was popular among conservative and extremist figures. Apple Inc. and Alphabet Inc.’s Google previously had removed Parler from their app stores. The three tech companies’ actions essentially took the service offline. Trump’s account, meantime, was banned from Twitter Inc. and remains suspended on Facebook Inc.

In the past several years, antitrust regulators have ramped up investigations into the market power of large technology companies, just as Microsoft fell under government scrutiny and faced a U.S. antitrust lawsuit more than two decades ago, when Nadella was a rising manager. It’s better for the younger technology companies to face robust competition and handle negative consequences of growing too big ahead of time, rather than waiting until their size leads to problems for consumers and rivals, the CEO said.

“Big by itself is not bad, but competition is good,”  he said. “And more importantly, you need to have a business model that really is aligned with the world doing well. There are certain categories of products where the unintended consequences of the growth on that category or lack of competition creates issues.”

The need for competition includes rivalry from China, Nadella said, although national security concerns must be reckoned with by each government, Nadella said.

“There is no God-given right for U.S. tech companies to take for granted that there cannot be other tech powers,” he said.  “All of us in the West Coast of the United States need to be more grounded, because sometimes I think we celebrate our own advances far too much.” Instead, companies should look at what's happening in the world and how relevant their technology is, he said.

Microsoft shares have surged more than 500% since Nadella took over as CEO seven years ago, after languishing for more than a decade under his predecessors, Bill Gates and Steve Ballmer. Though Microsoft has mostly eluded the regulatory scrutiny of other tech giants more recently, it has drawn some complaints from smaller rivals. In July, Slack Technologies Inc., which is being acquired by Salesforce.com Inc., urged European Union antitrust regulators to probe Microsoft for unfairly foisting its Teams collaborative software on millions of users by combining it with Office 365 cloud-based productivity programs. Nadella dismissed those claims.

“I always ask the question, would Slack have even existed if it was not for the free access they had on top of, say, the Windows platform?” he said. “They didn’t have to call Microsoft. They didn't have to go through any of our app stores. They didn't need any of our permission compared to any of the other platforms that they're available on. We perhaps provide the most open platform in Windows and even in Office 365.”