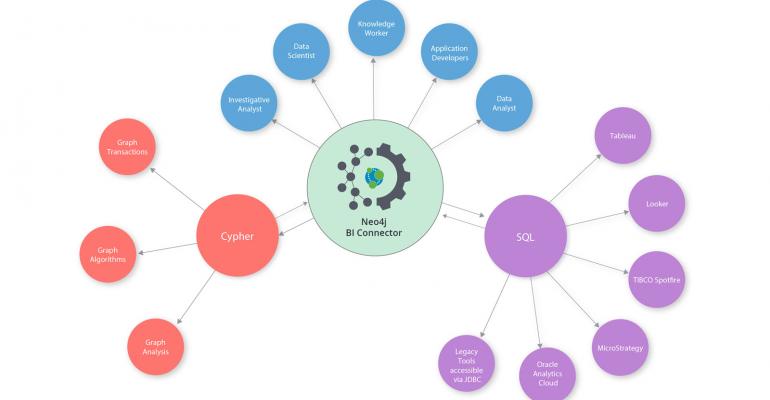 Neo4j is at the forefront of a growing graph database movement. Its new BI Connector seeks to convert more enterprise users by translating the traditional relational database world into the world of graph.

Even in the age of social distancing, relationships mean a lot, especially to today’s customer-centric businesses. To retailers trying to develop better product recommendations and to financial institutions looking to improve fraud detection, relationships between things can be more important than the things themselves.

It’s not surprising then, in this age of database specialization, to see graph databases gaining in interest for workloads that involve storing and retrieving relationships between people and products, genders and geographies, peer groups and preferences.

Enter Neo4j, the leading graph database, which recently shipped its 4.0 version of its flagship product. The company followed that release last week [March 24] with a new add-on, the Neo4j BI Connector. The Connector is a translator between graph and relational database data and exposes the Neo4j graph database to many more potential users, said officials of the company, which was founded in Sweden in 2007 and shipped its first product in 2010.

The Connector supports popular BI tools such as Tableau and MicroStrategy as well as any that are compliant with JDBC (Java Database Connectivity). The Connector is targeted at companies that run different kinds of databases and want to be able to share graph data with analysts who work with relational databases or SQL tools.

“The BI Connector makes it easy to get data from Neo4j into other analytic processes that are happening in the enterprise,” said David Allen, partner solution architect at Neo4j. “What we saw was happening was that customers would write a lot of extra custom code to get data out of Neo4j, and then move it over to these BI groups. Now, the BI Connector gives those analysts a live connection into the graph database.”

Relational databases store data in rows, columns and tables, and the language used to extract information from them is called SQL (Structured Query Language). The technology dates back to the 1970s and has been the bedrock of financial management for most large businesses for decades.

Graphs organize information differently. Rather than rows and columns, “think of bubbles that you might draw on a whiteboard and then lines that connect them. Those are nodes and relationships,” Allen explained. Nodes can contain a single customer profile or a cluster of similar customer profiles. Lines, or relationships, connect to other nodes that may contain a product database or marketing plan. Queries, Allen explained, can be a little like playing the game “Six Degrees of Kevin Bacon.”

Information is extracted via a query language that understands graph databases. A popular one is Cypher, which was created for the Neo database. Both the core Neo4j database and Cypher are available in open source versions. Other languages include GraphQL, an open source project that is being integrated with Cypher via Neo4j’s GRANDstack project.

There are two reasons for the current growth of graph databases. The first is that compute power and memory are now much cheaper and allow larger databases to run in real time. The Neo4j graph database is available on-premises, on the major cloud platforms and as a managed service.

The second is that many of today’s complex queries are just easier and faster to do on a graph than on a relational database, say implementers. “Data analysts and data teams are struggling with many use cases that stretch the traditional relational model, and those use cases are far better executed in a graph,” said Dr. Michael Moore, national practice lead for enterprise knowledge graphs and AI in EY’s Data and Analytics (DnA) Group.

The BI Connector also seeks to bridge two worlds and bring relational into the new world of graph, Moore said. “Most of the BI tooling that's grown up over the last 10 or 15 years started with SQL being the source database and as a result it hasn't been effective for users to take existing BI tools and point them at a graph.”

In addition to fraud detection and recommendations, use cases include master data management and identity and access management. And, like its NoSQL cousins, graph databases have scalability and resiliency advantages over relational databases. In its 4.0 release, Neo4j added sharding and federation, which enables a very large database to be split across multiple machines.

But despite the technology’s promise, Moore said that this is still early days for graph databases, as users are still learning what graphs can bring to the table.

“My day is split between educating companies about graph databases and doing specific implementations around specific use cases,” he said. “Right now, most of our large-enterprise clients are either are not aware of the analytical opportunity or they're just now starting to kind of do some toe dipping.”

It’s also clear that Neo4j and other graph databases, such as TigerGraph or Amazon Neptune, are part of a group of upstarts that do one job very well but will struggle to achieve the reach of an Oracle, MySQL or Microsoft SQL Server database.