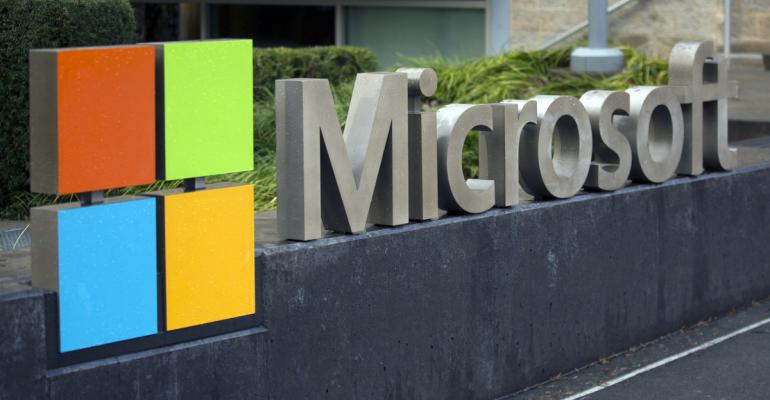 Microsoft is riding a wave of demand for its Azure cloud services, which let customers run and store applications in the company’s data centers. Azure revenue almost doubled, keeping up with a pace of growth that’s persisted for more than 10 quarters.

Profit in the period ended March 31 rose to $7.42 billion, or 95 cents a share, topping the 85-cent average estimate of analysts polled by Bloomberg. Sales climbed 16 percent to $26.8 billion, Microsoft said Thursday in a statement, better than predictions for $25.8 billion.

Microsoft is riding a wave of demand for its Azure cloud services, which let customers run and store applications in the company’s data centers. Azure revenue almost doubled, keeping up with a pace of growth that’s persisted for more than 10 quarters. Chief Executive Officer Satya Nadella is also leading a charge to move clients to internet-based versions of work-productivity software, branded Office 365. Total cloud revenue now stands at more than $20 billion on an annual basis, and Brent Bracelin, an analyst at KeyBanc Capital Markets, expects Microsoft to exit next year with double that.

"Azure is the future," said Kim Forrest, senior portfolio manager at Fort Pitt Capital Group LLC in Pittsburgh, which owns Microsoft shares. "For the next three to five years, the story for Microsoft is moving their existing base to some sort of cloud product."

The company’s shares were little changed in extended trading following the report, after closing at $94.26 in New York. Microsoft stock touched an all-time high in the March quarter and gained 6.7 percent in period, compared with a 1.2 percent decline in the Standard & Poor’s 500 Index.

The company’s Azure trails market leader Amazon.com Inc., but continues to about double from a year earlier every quarter as Microsoft adds customers like Publicis Groupe SA and Johnson Controls International Plc and weaves artificial intelligence, data storage and security services into its cloud programs. Amazon is several times bigger than Redmond, Washington-based Microsoft in the cloud-infrastructure market, but doesn’t focus on the work productivity-apps space.

"The concern may be about that deceleration," he said. "There were some out there making the case that it would accelerate."

In the third quarter, Microsoft’s commercial cloud sales rose 58 percent to $6 billion, the company said in slides posted on its website. Gross margin for that business widened 6 points to 57 percent.

Capital expenditures were $3.5 billion in the quarter. Microsoft has been boosting spending to build new cloud data centers as Amazon and No. 3 U.S. cloud provider Google do the same. Alphabet said earlier this week that it almost tripled first-quarter capital expenditure to $7.7 billion. Microsoft during the quarter announced it will open data centers in Abu Dhabi and Dubai, its first in the Middle East, as well as adding two more locations in Germany.

Microsoft Chief Financial Officer Amy Hood said the company will continue to increase spending as long as customer demand for cloud services rises. "As long as we see the demand signals globally grow, we will continue to see that number grow," she said in an interview.

Microsoft shareholders normally worry about spending, but they’ve been willing to overlook increases to bolster the cloud business, Forrest said.

"If you say it’s for building out cloud services, investors shut their piehole because they want them to invest in that," she said.

Microsoft at the close of the quarter reorganized its product units to de-emphasize the shrinking Windows business and split it between a group focused on devices and the Azure team, with Windows and device chief Terry Myerson leaving the company.

While Microsoft reorganized its engineering divisions, its financial reporting segments remain the same.

Total revenue in the company’s More Personal Computing division, which includes the Windows operating system, rose to $9.92 billion, beating the $9.26 billion average prediction of three analysts polled by Bloomberg. That was especially notable given that global PC shipments fell 1.4 percent in the March period, according to market-research firm Gartner Inc. -- the 14th straight quarter of declines.

Revenue from Surface hardware rose 32 percent from a year ago, and gaming revenue rose 18 percent, fueled by sales of Xbox software and third-party games.

Windows commercial products and cloud services, a business where Microsoft sells a package of security and other premium services to corporate Windows users, posted revenue growth of 21 percent, an important benchmark because Microsoft views this segment as the future of Windows in a market where PC usage is shrinking.