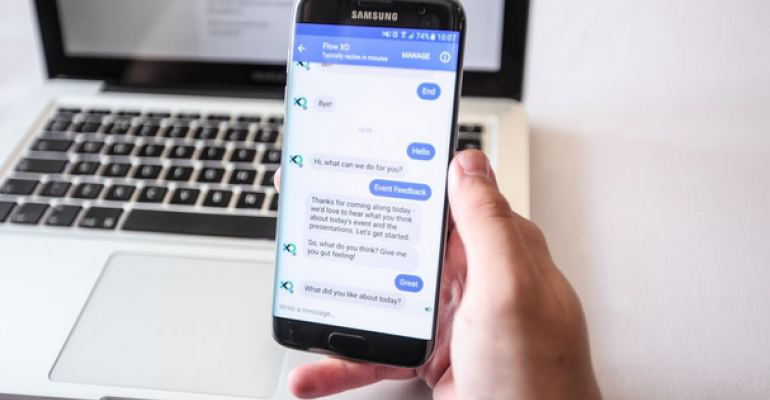 Client-facing chatbots are getting smarter, which is increasing the number of enterprise chatbot use cases from HR to IT and beyond.

As hyped as it has become, artificial intelligence can still seem a degree removed from the world of enterprise IT. Many of the recent developments in AI and machine learning have focused on the research or consumer sides of the sector, and some of the buzz is humming around not what is already here but what could be just a short jaunt down the road. But there is one area in which machine learning and AI have the potential to change things in organizational spaces--and soon: chatbots. Essentially computer programs designed to simulate conversations with real humans--in particular, online conversations--chatbots have quickly moved on from their early days of simply connecting a user with the right customer service department. As a result, the number of enterprise chatbot use cases is increasing.

“In the next two years, we expect a strong change in this market,” said Alexey Chernyshev, CEO at Odus.ai. The technology behind chatbots--natural language processing, in particular--is evolving quickly, and Chernyshev said that some methods already allow for context understanding. The result is that well-designed chatbots are getting closer to an almost-human level of communication.

Chernyshev added that the demand is even leading to the creation of a new profession: conversational designer.

“This is a synergy of a marketer's and a programmer's skills," he said. "This is a person who understands how to create dialog scripts for chatbots. In five years, each enterprise will have such a specialist in the staff.”

Outward-facing chatbots are part of the appeal of the technology for organizations. Chernyshev said that almost all of Odus.ai’s clients create chatbots to simplify communication between customers and their brand.

“Already there is a great demand for chatbots who will actively communicate with the customer,” he said.

“These chatbots have what is called ‘augmented intelligence,’” Shaw said. “They have pattern recognition capabilities, and they can utilize the knowledge database, providing superior service compared to non-AI processes.”

But chatbots also hold potential for inward-facing communication within organizations. At oMelhorTrato.com, work recently began on the development of the organization’s own HR chatbot using artificial intelligence, said CTO and co-founder Cristian Rennella.

The move has had early successes, Rennella said. “Thanks to artificial intelligence through deep learning with Google's TensorFlow platform, we were able to automate 66.9 percent of queries from new hires,” he said. Potential employees got responses to most of their questions in seconds, he said, and the HR department had to field only questions that had not previously been asked.

The move has helped the entire team by removing the need to answer questions that are asked often, and that have a set and easily provided answer, he said. Implementing the chatbot has increased the team’s productivity by 24.4 percent, Rennella said, and freed up time to interview potential hires.

IT departments will, of course, be heavily involved in any chatbot implementation in an enterprise, but they may themselves also benefit from such a technology, said Shaw.

“With AI technology making its way into corporate and government networks, AI, like it or not, is going to be a dominant solution for IT service management (ITSM) in the future,” Shaw said. IT departments receive huge numbers of inquiries, he added, and human intervention for each one is increasingly unsustainable. Again, in cases where questions have a specific, programmable path that can be followed, chatbots may offer a solution.

“We will see many organizations turn to chatbots with AI capabilities as a means to handle, for example, frontline IT support calls,” Shaw said.

Some obstacles to chatbot development remain, however. One of those, Chernyshev said, lies in the ability to understand the nuances of online communication. Hiring specialized firms with expertise on the communication patterns of the community being served by the chatbot is one way to tackle this.

There also needs to be transition time before communications go chatbot-first, Rennella said. “We made the mistake of thinking that everything was solved,” he said. Having a real person monitor the chatbots full time for at least a month is a best practice, he advised.

And the technology is still developing, Chernyshev said, which means that the chatbot/client dialog should be directed along a given path. Keywords and specific questions are increasingly successful, he said; open-ended queries or dialogue deviations are going to be less so.

“It’s impossible,” he said, “to train a chatbot to know everything.”