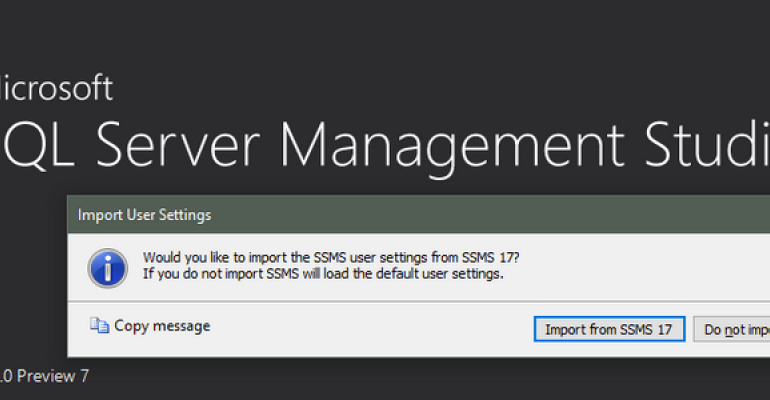 SQL Server Management Studio 18 is arguably the first major release of SSMS in terms of features and improvements since SQL Server 2005.

For more than a year, SQL Server database professionals have been receiving monthly upgrades to SQL Server Management Server 17.x while the new version--SSMS 18.0--was in development. The improvements are foundational and they are many. Certainly, there have been improvements since the release of SQL Server 2005, but usually on the scale of adding functionality to support new features in the latest version(s) of Microsoft SQL Server. In my opinion, SQL Server Management Studio is the first major release of SSMS in terms of features and improvements since 2005. SSMS 18.0 became available in April, and Version 18.1--which includes some fixes and new features--launched earlier this month. Here's what you need to know about the SSMS 18 release.

The changes are evident as soon as you start the SSMS 18 download. The download package is half the size of its predecessor. There are some additional improvements to the installation process: You can now install SSMS into a custom folder for the first time in the life of the product. This has been a request going back to the release of the original SSMS. You can also install SSMS in a language that is different from the operating system, which is beneficial to those in the SQL Server community who are multilingual and may have to work in an environment in which it's not possible to change the configuration of the OS to match their native tongue. The installation process also allows you to perform a one-time import of settings from v17.x into your new SSMS 18.0 installation.

SSMS 18 is the first version to be able to fully support SQL Server 2019. You are going to want to start exploring the forthcoming release of Microsoft SQL Server as soon as possible, based upon the insights I’ve been exposed to. If you have been doing so using SSMS 17.x, then it’s time to take off the training wheels--and 18 allows for that.

3. The core experience and design have not changed much.

The main physical change you may possibly notice is the upgraded shell taken from Visual Studio 2017 that brings with it all the accessibility and security features already in place in Visual Studio. Other features that are more forward-facing than most include improvements to multi-monitor configurations and a Showplan makeover.

SSMS 18 and Azure Data Studio can be launched from within one another in order to share features central to only one of those tools. While these are two separate applications, they really aren’t. You can launch Azure Data Studio from either a right-click on a database in the Object Explorer frame or from the Tools menu. There is a fantastic feature I can’t wait to write about based off of Juptyr notebooks that allow you to embed queries and text in the same document for sharing. That feature is only available through Azure Data Studio once you also install the SQL Server 2019 Preview extension from the Azure Data Studio Marketplace. Improvements in Azure SQL Database support directly from SSMS now include coverage for recently added vCore SKUs and integration of Azure Database Migration Service and Database Migration Assistant to facilitate seamless migrations to the Microsoft cloud.

5. There are several feature improvements of note, including:

Database professionals who find all of this compelling will be pleased to know that SQL Server Management Studio 18.0 included even more features. To see the complete listing of new features, bug fixes, deprecations and more, take some time to explore the official Microsoft release notes for SSMS 18.0.