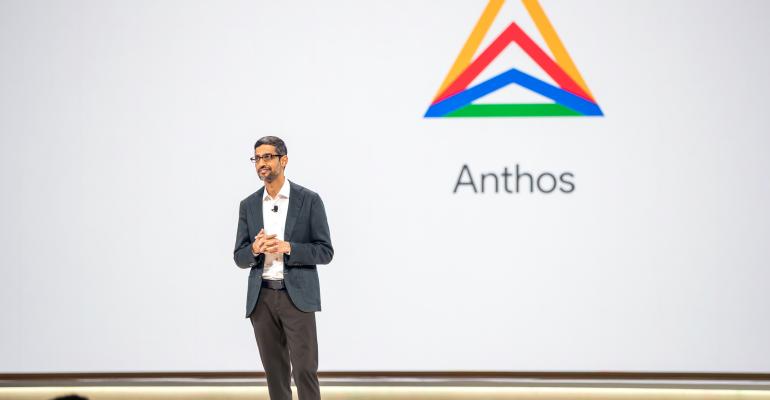 Updates to Google's integrated platform for deploying cloud applications promise to add more automation to the task of deploying Kubernetes and all of the accompanying pieces of a cloud platform.

Google also announced the beta of Cloud Run for Anthos. Cloud Run, introduced in alpha mode at the Next conference in April, is another managed service that enables developers to use Kubernetes to deliver serverless functions.

The updates seek to add more automation to the difficult task of deploying Kubernetes and all of the accompanying pieces of a cloud platform, such as Istio, while enabling developers to be more productive. "Not everyone has the engineering bandwidth to be able to integrate Istio service mesh themselves," said Eyal Manor, VP Engineering for Google Cloud, at an Anthos customer event here.

One early adopter of Anthos is OpenText. The document management company is using Anthos to deliver cloud versions of its products to customers, and also manage its own internal DevOps and application integration. The latter is a big challenge considering the many companies OpenText has acquired over the past decade to build out its platform, said Savinay Berry, Senior Vice President, Cloud Service Delivery for OpenText.

“Anthos gives us the common architectural framework that takes out dependencies,” Berry said. “Anthos also gives us a catalyst to reach a whole new set of customers that we wouldn't have been able to reach as quickly as we can now to provide solutions in the cloud.”

Kubernetes has come a long way, first from Google’s internal infrastructure, then to hot open source technology, now to what Manor said was an “application modernization platform for any environment.”

That is one effect of the new customer-focused Google Cloud under Thomas Kurian, the former Oracle executive who joined Google late last year: To make Kubernetes more business-friendly and easier to consume.

Many businesses are still trying to figure out what to do with the cloud and containers, but Google sees the new development paradigms not as a matter of technology, but choice. Customers may not be shuttling containers back and forth across clouds, but they may need to run an application in one cloud while keeping data on premise, while keeping all the stakeholders of the application on the same page.

“Anthos is about the journey of a customer’s digital transformation—a managed application innovation platform,” said Chen Goldberg, Anthos Director of Engineering at Google. “Yes, it’s not easy to learn Kubernetes, but it’s also not easy to have five teams running five sets of technology.”

How Google’s Anthos Is Different from AWS and Azure Hybrid Clouds
Apr 30, 2019