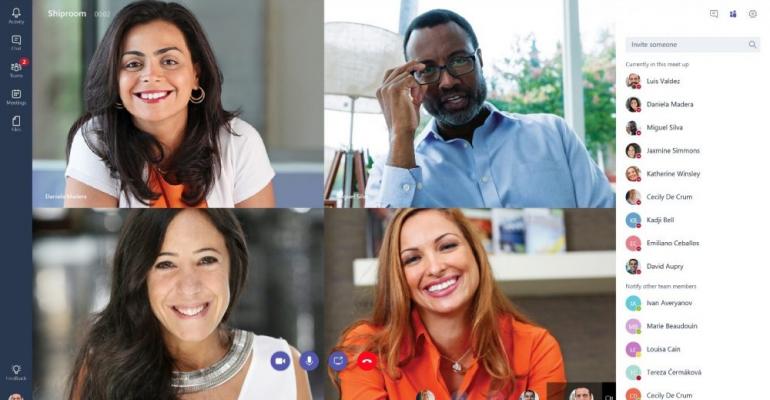 Microsoft
New Microsoft Teams features include the ability to have up to 1,000 active participants in a meeting.
Collaboration>Conferencing

As workplaces adjust to a combination of in-person and virtual communications, Microsoft is expanding its Teams capabilities and unrolling new hardware to go with its collaboration platform.

As "working from home" has begun to shift from novelty to normal while some offices are opening again, the role of collaborative workplace tools will be to respond to a hybrid model of in-person and telepresence. The latest Microsoft Teams update includes new features – and hardware – aimed at this new reality.

As part of its Advanced Communications Plan, the company has debuted an improved capability to control the size of Teams meetings and their overall participation. With this week's Microsoft Teams update, customers have the option to have up to 1,000 active participants – where "active" is defined by the ability to chat in the meeting or talk – or 20,000 audience members. Teams will automatically shift from active mode to what's called "viewing mode" once the 1,000-person limit is hit.

Microsoft also announced the ability to add branding to Teams meetings. That means customers will be able to display a branded meeting lobby and extend their branding to the core meeting experience. Both of these features are now part of the Advanced Communications Plan, added to any Microsoft 365 or Office 365 paid subscriptions, and are available this week.

The Microsoft Teams update also focuses more on ensuring compliance in meetings as well as enhanced call-center integration. The collaborative workspace already had the ability to use an administrative policy to stipulate when calls and online meetings should be automatically recorded for processing and retention as required by corporate or regulatory policy. The platform has four primary categories of recording functionality – convenience, functional, organizational, and lawful intercept. (The most casual, "convenience," is an impromptu recording of a Meeting call by a user, and each level has specific requirements for how recordings are initiated, what is recorded, where recordings are stored, who is notified, who controls access, and how retention is handled.)

Now, Microsoft is boosting its cloud-based phone system Teams Calling with an array of new hardware options, ranging from dedicated Teams devices to push-button phones. The Teams devices have ambient touch screens and the ability to give voice commands via Microsoft's Cortana assistant. The phones include USB phone options with a dedicated Teams button and the ability to connect to both a PC and Mac. The devices are expected to be available in late 2020 and early 2021.

"We've reimagined the concept of the phone," said Herskowitz of the new Microsoft Teams offerings. "We totally rethought the devices and endpoints we've used in the past. We're trying to evolve the communication solution to new ways of working."