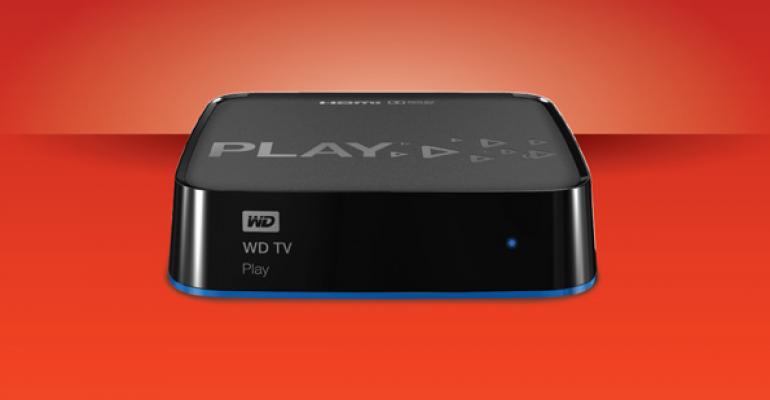 With the WD TV Play, Western Digital expands its living room set-top box product lineup to the low end of the market, giving it reasonable alternative to similarly-priced Roku units. It’s particularly well-suited to those with their own video library, whether it’s on external USB hard drives or a network share.

Check out my earlier preview, WD TV Play Media Player: First Impressions, a bit of background on this review and more info about the device.

To be clear, the WD TV Play is not a direct competitor to the Roku 3 I recently reviewed. That device sits at the high-end of Roku’s product line, whereas the WD TV Play sits at the low end of Western Digital’s. But depending on your needs, the WD TV Play may offer some compelling advantages over a Roku, the latter of which is designed almost exclusively to broadcast Internet-based streaming services such as Netflix, Hulu Plus, and Vudu.

WD TV Play offers those services, of course. This is pretty much the baseline for a living room set top box, and WD even places prominent and colorful logos for Netflix, Hulu Plus, and Vudu right on the WD TV Play’s small remote. (A small number of the remote buttons, including those for Hulu Plus and Vudu, can also be configured to do other things.) The services all look and work as expected on the WD, if a bit slowly as noted below.

So let’s focus on what differentiates this device instead.

If you’re coming at this device from an old-school Windows background, as I am, you may have a video library of some kind on USB hard drives or a home server/PC on your network. And while you can find apps on Roku that do offer playback from these source, support for playing content from USB or your home network is built right into the WD.

It works. Using a simplistic if initially inscrutable UI and a built-in app called My Storage, you can connect USB-based storage or file shares on your home network. It connected without issue to my home server and a Windows 8-based file share, letting me (slowly) navigate through the available videos, make a selection, and then play it on my living room HDTV from the couch.

Irritatingly but predictably, the Previous and Next buttons on the remote actually move immediately to a different video, losing your playback place, a huge annoyance when tapped inadvertently. But the Rewind and Fast Forward buttons can be tapped repeatedly for different speeds, up to 16X, which is appreciated.

It gets better. The Play is also fully DLNA compliant, so you can stream content from a Windows-based PC to the device using Play To. I experimented with this using my own content in Xbox Video on Windows 8 and it worked flawlessly.

And then it gets worse.

Performance is leisurely at best, and in this case all I can say is, you get what you pay for. I didn’t previously consider the Roku 3 to be any kind of speed champ, but compared to the WD TV Play, its greased lighting. With the WD TV Play, you mash a curiously soft button on the remote and wait. Something happens eventually, usually right after you were sure the first press didn’t take and you’ve tried it again. Oops.

And while the WD does hit all the high points when it comes to media services compatibility, it misses out on some that happen to be quite important to me: Amazon Prime Video and Amazon MP3, both available on Roku, are missing in action on WD TV Play.

Put simply, while the WD can’t compete with the Roku from a services availability or performance standpoint, this device is particularly interesting to anyone with Windows-based media shares or USB-based content, in particular video. Yes, I know there are options on the Roku, but it being built-in on WD, along with DLNA compatibility, is a big deal. (And higher-end WD set-top boxes, like the WD TV Live Hub make up for some of the WD TV Play’s shortcomings while retaining its advantages.)

Plus, it’s just $69.99. That price point puts the WD TV Play in Roku and Apple TV territory, and well below the Xbox 360, which is the only other device that offers similar local playback capabilities. So the WD TV Play is recommended, but especially so for those making the transition from legacy video collections to more modern cloud services like Netflix and Hulu Plus. Certainly, I’m plotting such a transition myself.