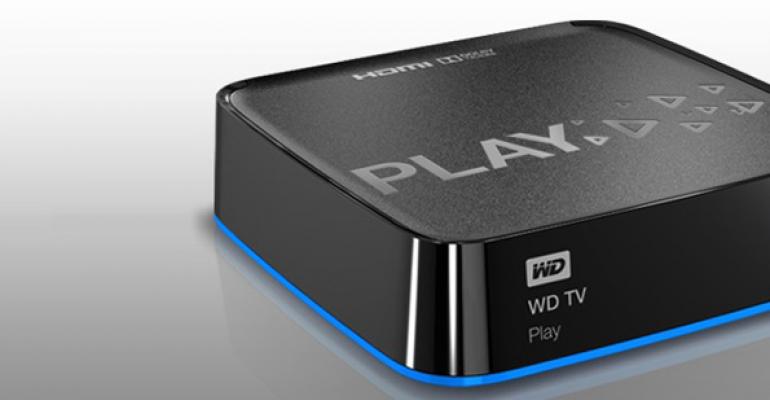 Roku isn’t the only company taking on the living room: Western Digital recently updated its line of media players with the low-end WD TV Play. Like the Roku devices, the Play hits a no-brainer price point of just $69.99 and delivers a nice range of online media services. But what differentiates it from the competition is its compatibility with PC-based media on your home network.

The WD TV Play is the latest entry in Western Digital’s growing family of media players, joining the high-end ($194.99) WD TV Live Hub, which I reviewed a few years back, and the $99.99 WD TV Live. Not surprisingly, WD is shooting for the Roku end of the market with this new device, which not only apes Roku pricing but also the basic look and feel. The WD TV Play is a hockey puck-like device, like the Roku, with a pleasant (and LED lit) blue bar at the bottom. (Yes, you can turn off the light.)

Compared to other WD players, the Play is lacking a few features, none of which are particularly damning in my mind: It can’t play MPEG2 video or DTS audio, lacks multi-room streaming, and doesn’t include a built-in hard drive. (That latter issue is overcome by a USB port; you can add any USB-based hard drive or memory device to the unit easily.)

Compared to the Roku 3, about which I recently wrote my first impressions and will soon review, the WD TV Play appears to be very similar. It offers apps for most of the expected top-tier services—Netflix, Vudu, Hulu Plus, as well as a cadre of useful second-tier services like Vimeo, CinemaNow, Spotify, Pandora, and so on—and does so with a grid-based UI that is very similar to that on the Roku 3. (And it’s filterable, so you can view, say, just video apps.) Amazon, however, is missing in action.

Over the next few weeks, as I review both of these devices, I’ll be looking at three key areas. First is the availability of services, which I sort of vaguely expect Roku 3 to win handily, though to be fair, most of the most valuable services appear to be available on both. Second will be the performance: I know that the Roku 3 offers some advantages over previous units, but it remains to be seen whether the Play does as well. Third is compatibility with local/network-based media, via USB and over the home network. In this last category, I think we could see the WD pull ahead, but again, I need to spend more time with the device first.

I can say that the WD Play TV appears to be an interesting option for those of us Windows users who do have a lot of content on USB-based hard drives or network-attached PCs at home. Oddly, I wasn’t able to connect to network media shares via Wi-Fi, though it worked over Ethernet. (This might be an issue with my home network, so I’ll work on that.) But the ability to connect to media libraries on PCs and home servers is a huge advantage for those of us with such collections. And it appears to work with Play To in Windows 8, in apps like Xbox Video.

More soon. In the meantime, here are a handful of photos. I can’t take screenshots of the device UI, I believe because it implements some form of copy protection on the video stream that other devices only enable when there’s a video playing.