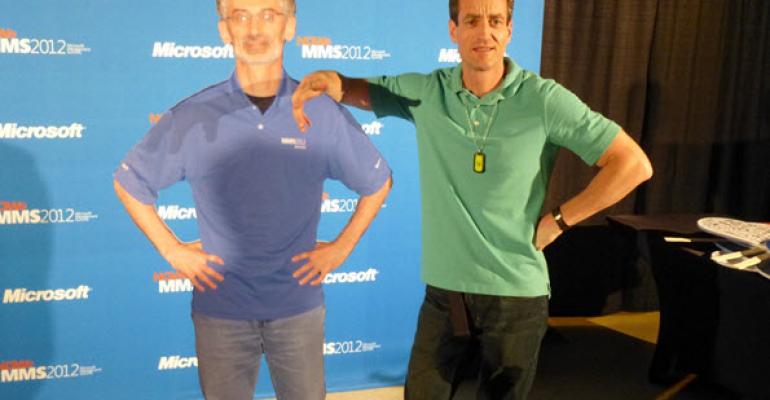 Wally Mead, the Face of ConfigMgr, Leaves Microsoft after 22 Years

When most think of System Center Configuration Manager (and SMS before that), there's a single individual that comes to mind: Wally Mead. Wally has been the one person at Microsoft that has led evangelism for ConfigMgr better than any other.

I've known since this past weekend, but today the news becomes official through a press release. After 22 years, Wally Mead is leaving (today is his last day) Microsoft and joining Cireson as a Principal Program Manager.

I've known Wally for years (and can't even count how long). He's a good friend and has more technical knowledge about ConfigMgr stored in his noggin than all the reams of electrons amassed in the System Center documentation on TechNet. He's truly someone I look up to, both personally and professionally.

Wally could regularly be seen at MMS and TechEd, delivering extremely popular sessions and instructor led labs. I've had the true pleasure of spending time with Wally over dinners and lunches. Just two years ago we celebrated his 20 year anniversary at Microsoft at the Microsoft Management Summit and it was just assumed that he would retire from Microsoft. In fact, we discussed it over dinner one night at System Center Universe 2013. But, things change, and we never truly realize how those things can change us personally. Wally is a legendary figure and it's truly sad to see him go.

However, it should be noted that he is joining a growing and thriving company, Cireson. Cireson is a great company with great people, and Wally's presence there will only prove to make it even better. Speaking with Wally over the past few days, he's excited about it. Wally follows Travis Wright, who joined Cireson in September of 2013. Travis was a long time Microsoft Principal Program Manager behind System Center Operations Manager and Service Manager, so Cireson now has a couple extremely huge names attached to the business.

Speaking with others over the past few days who have also known Wally for years, they all agree that ConfigMgr itself has taken a huge hit with Wally's departure. It's almost like ConfigMgr just died. In many cases, Wally's technical knowledge has been the glue that held many ConfigMgr implementations together. And, this really further emphasizes how Microsoft is changing. ConfigMgr is strictly an on-premise technology and it's becoming increasingly evident that Microsoft is working steadily to eliminate on-premise technologies. Last year I led industry commentary on how IT is Microsoft's biggest competition, talked about it on an episode of Windows Weekly, and Paul took up a similar commentary just days ago in Will IT Ever Buy Into "Mobile First, Cloud First"?. Wally gets a good barb in at Microsoft in the press release, stating that he joined Cireson...a company that...values the community. We've all felt Microsoft's heavy-handed approach to community over the years - at least those times they actually cared about it.

During one conversation with Wally, he indicated that when Microsoft decided to push ConfigMgr completely into the Cloud, it would be time for him to retire. I won't state that Wally leaving Microsoft indicates anything more than a simple professional change, but it is interesting timing since we're anticipating roadmap announcements at TechEd 2014 in a couple weeks.

But, I think it's safe to put it this way: MMS is dead. Microsoft is moving us all to the Cloud. And, Wally Mead has left Microsoft.

For those interested, Wally will continue his evangelism of ConfigMgr at Cireson and help lead the company in providing support and products around Microsoft's on-premise endpoint management solutions. Wally spends a good amount of his time visiting local User Groups and delivering presentations, so you might be able to catch him there.

Sadly, TechEd 2014 will be the very last time we see Wally leading instructor led labs. If you've been positively influenced by Wally's valuable years at Microsoft, I highly recommend you stop by and thank him for his time at Microsoft and congratulate him on his new direction.

If you're attending TechEd 2014, you also have one additional opportunity to see and talk to Wally as he'll be presenting at the Day5 event on Friday of that week.

@rodtrent Perfect. Also - just so you know I fully expect Wally to continue doing his labs at events. Already talking to MSFT about it