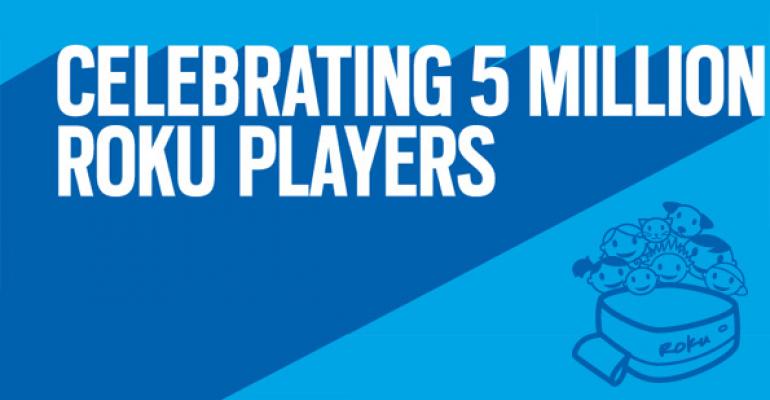 Roku: 5 Million Devices, and What This Says About the Living Room

The market for living room technology is surprisingly small

I’ve made the case that Microsoft’s Xbox 360 sales over many years do not constitute a particularly large market, especially when compared to those for PCs, tablets, or smart phones. But this week, Roku announced that it has now sold 5 million of its living room set-top boxes. What does this say about the state of this market?

To be clear, Roku has been selling its devices for five years: The company launched its first “Netflix player,” as it was then called, in May 2008. So it’s sold roughly one million units a year.

By comparison, Microsoft has sold 76 million Xbox 360 consoles, from its launch in November 2005 through February 2013. That means that Microsoft has sold roughly 10.4 million units per year, and that the Xbox 360 is about 10 times “as popular” (if you will) as the Roku.

That said, most of the activity that occurred on the Xbox 360 over that time period was gaming related, not Netflix- or entertainment related. Today, Microsoft claims that over half of all the activity on the console is entertainment- (i.e. not gaming) related. But since this is a relatively recent development—the last two years or so—it’s a bit hard to gauge how this compares to Roku usage. After all, a lot of Xbox 360s bought years ago are probably be used for entertainment purposes now. It’s not just new devices.

I think we can make the general claim, however, that the Xbox 360 is probably the most popular living room set-top box for entertainment. This is interesting for a number of reasons, not the least of which is the long-running complaint (which I’ve echoed repeatedly) that the 360 is unique among its peers—Roku, Apple TV, WD TV, PS3, whatever—in that it is the only device that also requires a yearly subscription ($60, for Xbox LIVE Gold) to access any of the entertainment services (Netflix, Hulu Plus, etc.) that users are actually enjoying.

That is, however, not the key takeaway. It is not even arguably an important takeaway.

Put simply, this market is tiny.

This market is tiny compared to the other electronic platforms that are now selling in far bigger numbers: Not just PCs (which are apparently on the decline) but also the market for tablets and smart phones. What these things all have in common, interestingly, is that they are indeed platforms. They are served by a sweeping set of apps that connect to online services. And if the living room is going to open up as a fourth major market—and not some backwater in which some low single digit or tens of millions of devices are in use around the world—it’s going to have to grow.

I believe that Microsoft gets this.

The next Xbox will be based on Windows 8. If Microsoft does this right, the next Xbox will be opened up to individual and enthusiast app developers who can submit apps through a curated online store—Xbox Games Store—and reach actual customers. This can happen in addition to all of the usual first-tier apps (Netflix) and games. I’m just speculating here, by the way. But I do think there’s a reason the Xbox logo is on the BUILD web site. Microsoft’s developer’s show has never included Xbox 360 software development before, after all.

They need this market to grow.

Today, there are maybe 40 million Xbox 360s in use around the world. (In fact, I think the Xbox LIVE subscriber figure—which, not coincidentally, is exactly 40 million members—points to the rough number of actual users of this platform.) If you were to add up the total number of Roku, Xbox 360, and Apple TV users, you’re looking at possibly 50 million people. That compares to 1.3 billion PC users, over a billion smart phone users, and a small (tens of millions) but quickly growing market for tablets.

I suspect 5 million units sold is pretty good for Roku, a relatively tiny company. But this market is not big enough to make sense as is, not for a company of Microsoft’s (or Apple’s) size. That is, I suspect, why Apple has referred to its Apple TV business as a hobby.

Look for big pushes this year and beyond from Microsoft, Apple, and Sony, and possibly Nintendo. This market either gets bigger or it gets left for the smaller players to fight over.