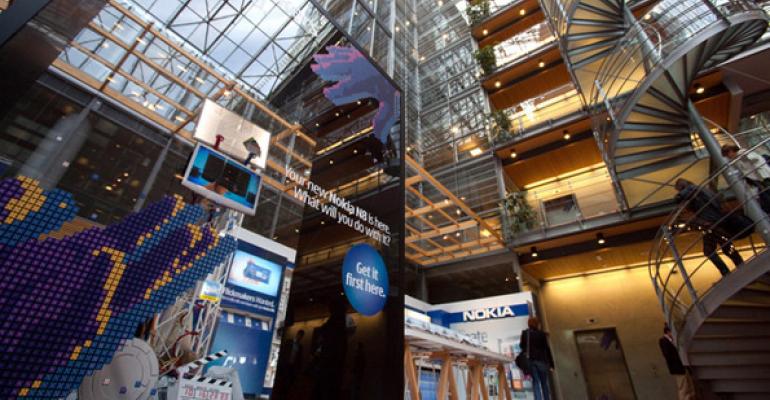 Have you heard the rumors? Chinese cell phone giant Huawei is allegedly interested in acquiring Nokia. Or not interested at all. Or something. But the very prospect of a Nokia acquisition, no matter how unlikely, has got me wondering again about the future of Windows Phone. And while there are all kinds of possibilities here, only one of them makes sense.

First, the rumor: The Financial Times reported this week that Richard Yu, the head of consumer products at Huawei as considering a Nokia acquisition or similar. “Maybe the combination has some synergies but depends on the willingness of Nokia,” he’s quoted as saying. “We are open-minded.” The issue for Huawei is that it is growing quickly, wants out of the feature phone business, and may need to make some acquisitions to compete head-to-head with the industry’s biggest players, Samsung and Apple.

That said, Huawei is also unsure about Windows Phone’s prospects, which is certainly understandable given its 3 percent market share worldwide (or about 5 percent in the US). “Whether Windows Phone [will be] successful is difficult to say,” he added. “It has a very small market share. [Windows Phones] is weak but still requires a license fee. That’s not good. Android is free.”

In the wake of the FT report, Huawei issued a statement noting that it has “has no plans to acquire Nokia.”

So here’s the thing.

Three years into Windows Phone, market share and usage remains small. The smart phone market has coalesced into a duopoly (as with the PC market before it) with Android playing the dominant role and Apple (again) picking up the remainder, in this case with iOS/iPhone.

In the tiny world of Windows Phone, things have likewise coalesced in a similar manner. With Samsung dropping off sharply in this space (understandable given its Android successes), Nokia now controls about 80 percent of the market for Windows Phone handsets, and HTC (another Android maker) picking up most of the rest. (Huawei also makes a Windows Phone handset.)

But Nokia is a big fish in a small pond. After selling 13.4 million Windows Phone handsets in 2012 and 5.6 million in Q1 2013 alone, things are of course looking up for Nokia in some ways. But the firm has fallen far from its heyday and it’s hard to imagine it ever recapturing its previous position in the market. (Apple, by comparison, was the number two smart phone maker in Q1 2013 when it sold 37.4 million iPhones.)

I admire Nokia deeply. In a series of “Nokia Advantage” articles, I’ve sought to call out various things the firm does above and beyond what any other Windows Phone handset makers—and even non-Windows Phone competitors, in some cases—offer. But it’s a fact that what I consider to be the superior smart phone platform is not only not popular but in many cases simply non-existent in consumers’ minds. And the company that dominates this tiny market, Nokia, is in tough shape.

When news of Huawei’s supposed interest in a Nokia acquisition hit Wall Street, Nokia’s stock jumped 4 percent. To … wait for it … $4.12. Ugh. And it’s since settled back down to $3.86 or so. Put simply, Nokia is an attractive acquisition target. A cheap date.

This is part of the reason that Nokia needed a partner in the smart phone space: It simply didn’t have the resources (or time) to develop a new smart phone platform that could compete more effectively with Android and iPhone.

But Nokia also isn’t turning around Windows Phone, at least not fast enough. And Windows Phone isn’t helping Nokia turn its own fortunes around either. Maybe something needs to give.

Mulling this over, I can think of a few options that make at least as much sense as Huawei acquiring Nokia. But the clear winner here is Microsoft buys Nokia. And in so doing, it ends Windows Phone licensing and simply makes their own Surface phones and accessories using proven Nokia know-how. In fact, if a Huawei purchase of Nokia ever does become a possibility, I recommend pulling the trigger on this immediately. The last thing we need is another Chinese company buying a former Scandinavian superstar (See: Volvo.) Closer to home, this wouldn’t be good for Microsoft or Windows Phone either, unless what you’re after is a flood of low-end phones in China. (OK, that’s kind of happening already.)

Put simply, Nokia is the best thing that’s ever happened to Windows Phone. And if necessary, Microsoft should protect this firm just as it would any other core asset. Hell, I don’t even see a reason to wait.

In one of the weirdest coincidences I've experienced recently, Mary Jo Foley—not knowing I was just publishing this post—just forwarded me a link to a Wall Street Journal report that claims that Microsoft has indeed been trying to acquire Nokia in recent days and that talks have broken down.

“Microsoft was recently in advanced discussions with Nokia about a purchase of the Finnish company's device business, according to people familiar with the matter, in a marriage that could have reshaped the mobile-phone industry,” the report states. “The talks have faltered, they said. One person said talks took place as recently as this month but aren't likely to be revived.”